High Times: Breathe in the Refreshing Air of Colorado Golf

Put down the ski poles, pick up the clubs. It’s springtime in Colorado.

Once the powder melts, the Centennial State may well boast a hundred reasons for hopping a two-hour flight from SoCal to the Mile High capital of Denver before exploring the ample bounty of this outdoorsman’s nexus.

Among the incentives, of course, is opportunity to play some golf at ball-soaring mountain elevations, your white sphere floating across the brown, red and green hues of the American West. For a pair of recommended stops, take in the cities of Vail and Grand Junction, which combine to offer a diversity of prime plays with some choice off-course stops along the way. 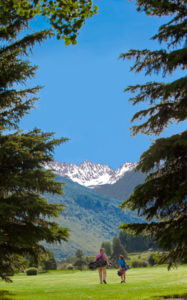 Altitude without attitude defines the culture at lofty Red Sky in Wolcott (20 minutes west of Vail), where PGA TOUR Commissioner Tim Finchem is a member, but play is open to guests staying with lodging partners at dozens of area properties (see sidebar).

Sited at 8,000-feet of elevation, a pair of primo courses designed by Greg Norman and Tom Fazio operate on an every-other-day basis to host guests and members. Greened ski runs, rustic ranch-style routing and gorgeous homes paint the property.

Proper club selection is paramount for success up here. “When you watch the TOUR guys on television and you hear the announcers say, ‘Oh, he’s using an 8-iron from 170 yards,’ up here that can happen. It’s easy,” says Red Sky head professional Chris Lai, adding that ball flight extends about 15 percent farther than at sea level. “You’ve just got to equate those numbers.”

The two courses are complementary in nature. “They’re totally different courses,” Lai says. “The Norman is a bit more of a challenge, with extra length and there’s more fairway bunkering and forced carry. When he was designing, I think he had links in mind, being out among the aspens, sagebrush and junipers.

“But the greens aren’t quite as undulating as the Fazio, where the play isn’t as long, but the putting surfaces keep the challenge well intact,” Lai adds. “I always tell people that I’ll make more birdies on the Norman because I’m making those 10-footers.”

Jeff Hanson, director of golf at Red Sky, sees the Fazio as a strategic, shot-making challenge and views the lengthy Norman (7,580 yards) as a meatier test of play. “When Fazio designed the course, he wanted a real playable golf course that everybody could play and enjoy,” Hanson says. “So it’s pretty open on the fairways and the bunkering isn’t quite as deep. The routing is more of a high-desert feel across the front, and the back is all through the Colorado Aspens. On the Norman, he really wanted a championship course, where big events could be hosted.”

“The areas around the greens are mowed to a length that you’d see on a municipal course putting surface,” Lai says of the Norman. “You can theoretically putt from 80 yards out. Or, you can play a bump-and-run with a 7-iron or a hybrid and try to bank it off the collar on the green complex.” 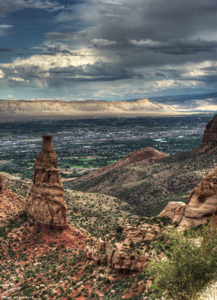 Routed through the Vail Valley and drawn along the Gore Range and Gore Creek, Vail’s first course (1962) plays with ample character and can be enjoyed at an early season (prior to June 25) walking rate of just $45.

The Audubon-certified course sees no shortage of club carrying … and bikers, Vail GC is being the first course in Colorado to debut the Golf Bike, which combines enhanced fitness and speed of play.

Director of golf Alice Plain, a former SoCal resident, recognizes more than just the ball’s propensity to fly farther. “It’s not just the altitude, but players will see less spin on the ball up here,” she says. “That’s challenging if you’re trying to spin it, but also forgiving if you’re a slicer or hooker because the shot might not be penalized as much. It changes your game playing up here.”

The Arrabelle at Vail Square

Choice lodging options abound across opulent Vail, but The Arrabelle at Vail Square is one of the best. Detailed touches flow throughout the European stylings and a romantic milieu. For a family trip, the locale will prove inviting with its easy access by foot or bussing to endless shopping, activity and dining. For an arrival night splash or final evening salvo, don’t miss out on a meal at Matsuhisa. SoCal diners will recognize the celebrated flavors from the sister Nobu establishments in Beverly Hills, Malibu and Indian Wells. At the Vail locale, an inspired setting pairs perfectly with the Japanese and South American fusion platings. 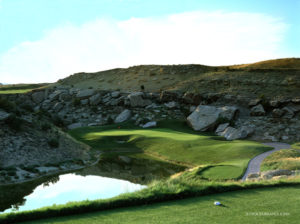 Perennially rated as one of Colorado’s top public courses, the Jim Engh-designed Redlands Mesa routes across a setting so stunning one may pause to wonder if they’re playing in a Charles Marion Russell painting.

“There’s a shock value, says Tom Carricato, general manager and director of golf at Redlands Mesa. “When people think of Grand Junction, they might think it’s this mountain-desert and it’s hot and all that. But being at the base of the Colorado National Monument, the scenery is calming and inviting, and when you’re on the course the views are just spectacular. There’s no place where you can get this close to the monument and just look to the east and seeing the world’s flattest mountain in the Grand Mesa.”

The leveled Mesa finds dichotomy with a host of massive boulders, awesome rock outcropping and elevated tees at Redlands, which will test the top sticks at 7,007 yards while concurrently sating the duffer with bowled design elements.

“One of the things about the course—and it’s why players of all levels enjoy it—is that it’s quite a dragon golf course from the back tees,” Carricato says. “But for the high-handicapper, everything bowls to the middle, so that makes the fairways pretty inviting and the course is really accessible for all levels.

“If you just try and play to the center of the greens, even if you pull it or push it on some holes, everything filters back to the center. Now, that’s not always a good thing if you plan on making a lot of putts, because the undulations on some of these greens (can be extreme).”

Still, the SoCal guest will find the setting to be singular and undoubtedly spectacular. 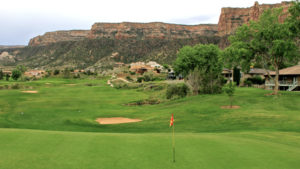 To enjoy a 36-hole day in Grand Junction, check out affordable and well-kept Tiara Rado, which is also bordered by the Monument and Mesa, with weekend green fees under $40.

“It’s a fun golf course,” says Mike Mendelson, head professional. “Not super-challenging, but a course that proves enjoyable for a diverse range of handicaps. It’s a place where anybody can play, where anybody can have fun.”

Nature is on full display here, as the course is a member of the Audubon Cooperative Sanctuary program, and sees more than 90 birds fledged a year.