So you’re one of those golfers who likes a challenge? Not just on the course, mind you; you enjoy the challenge of playing the best, and most difficult, golf courses to access.

But when it comes to accessing the golf course at The Annenberg Retreat at Sunnylands in Rancho Mirage, there’s no way. Ain’t gonna happen. Give up and move on. 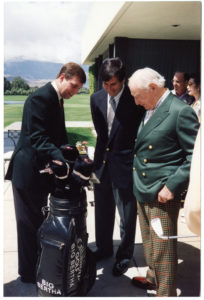 Prince Andrew and Walter Annenberg preparing for a round of golf.

Otherwise, it’d be better to concentrate on those other clubs, since they have memberships, and a member may actually invite you to play. You might be fortunate enough to know the head professional, or a golf staff member at one of the other courses, who could theoretically invite you to sneak out one afternoon after member play has concluded. Sunnylands has no membership, no head professional and no golf staff. Therefore, there’s no one to invite you to play. Unless, of course, it’s POTUS.

Sunnylands has been played by every U.S. President since Dwight D. Eisenhower, with the exception of Jimmy Carter, who did not play golf. Richard Nixon (his clubs are still on the grounds), Ronald Reagan, Gerald Ford and George H.W. Bush were frequent golf guests. Bill Clinton and George W. Bush got their rounds in, and Barack Obama visited Sunnylands six times during his two terms, perpetuating the estate’s moniker as the “Camp David West.”

For all intents and purposes, Sunnylands is the world’s most exclusive course.

“I think it is,” said grounds superintendent Drew Kerr. “Just because of the sheer number of rounds played, and the people who’ve played it.

“You’re talking about people with world-class jobs; Speaker of the House, U.S. generals, secretaries of state – these are the people playing out here, right along with world leaders from all sectors. It’s really done to help them meet in more meaningful ways so they can hash out weighty issues that have to do with things like world peace. And here, they can unwind in a place that’s much more relaxing than an urban area like D.C.,” Kerr said. 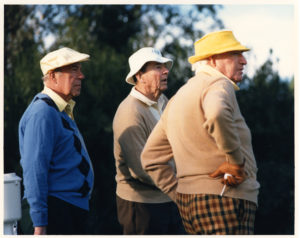 The Sunnylands layout is truly unique in many ways. The course was built as an amenity for the Sunnylands estate, constructed by media mogul Walter Annenberg and his wife, Leonore. The Annenbergs hired Dick Wilson to build the course in 1964, as they simultaneously constructed their 29,000-square-foot home on the 200-acre property. It was a truly private course, played only by the Annenbergs and their guests. And the guest list was mighty impressive.

Walter (1908-2002) made his fortune building Triangle Publications into a media giant, and sold it to News Corporation in 1988 for $3.2 billion. While building the empire, he purchased a number of television stations, and befriended movers-and-shakers in Hollywood and the television industry, including Reagan. Walter launched TV Guide Magazine, Seventeen Magazine and the Philadelphia-based “Bandstand” television program that eventually went nationwide as “American Bandstand.” He also served as Ambassador to the United Kingdom during the Nixon administration.

Walter married Leonore (nee Cohn) in 1951. Leonore served as chief of protocol for the Reagan administration, giving both she and Walter ambassadorial rank. After selling Triangle, they dedicated their lives to philanthropy, establishing the Annenberg School for Communications at the University of Southern California and University of Pennsylvania; donating $50 million to the United Negro College Fund; donating $500 million to public education; donating their entire collection of Impressionist/Post-Impressionist paintings to the Metropolitan Museum of Art in New York; establishing the Annenberg Foundation; and forming the Annenberg Foundation Trust at Sunnylands, which currently operates the estate. 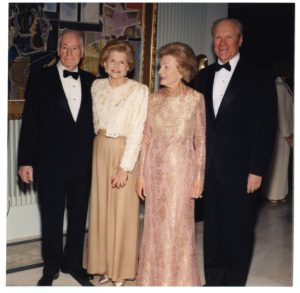 Their service, status and careers wired the couple into the upper echelons of society and government, and Sunnylands evolved into a place where world leaders mingled with movie stars and played golf on a course where they would not — could not — be disturbed. The Annenbergs’ New Years Eve Party at Sunnylands was a can’t-miss event, particularly for their good friends Ronald and Nancy Reagan, who ushered in the New Year with the Annenbergs every year of Reagan’s administration.

Playing golf on Sunnylands’ private course was always a big part of any event. Each day the Annenbergs were in residence at the home, the U.S. flag and a Sunnylands’ pennant were hoisted on a flagpole alongside the long, elegant main driveway, and taken down when they were away.

Kerr either has the easiest job in golf, or the hardest. He oversees a course that sees a relatively small handful of rounds every year, but it’s expected to be in tip-top shape regardless. When groups check in, Corona-based Championship Golf Services sends over a team of professionals, including PGA professional Cameron Carr, to handle golf-related services, including forecaddies. However, since there is no golf staff in-residence at Sunnylands, Kerr is basically “the man” when it comes to the golf experience. He likes it that way.

“It’s more independence,” Kerr said. “When there’s a retreat, we have forecaddies that will go out with the groups, and we’ll have a PGA pro on property. They’re in charge of all recreation, including fishing, swimming, swimming towels, tennis, bike riding … they’ll even play tennis with you if you need a partner.” 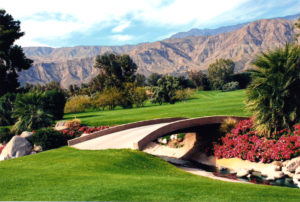 The course itself is a craft of design genius. There are only eight corridors and eight green complexes, and turf covering a total of 106 acres. Yet there are three different ways to play an 18-hole round, creating three completely different “courses.” The Historic Experience is the traditional play, the one the Annenbergs favored and often played just as a twosome. It measures only 5,869 yards from the back, tees (5,364 from the front), and is just as the Annenbergs wanted it to be: a walk, or cart ride, in the park. Wall-to-wall grass, imported and native trees, and traditional routing.

But as players contemplate their approach shots, the course’s teeth are revealed. The large greens are fraught with false fronts, and edges that refuse to hold shots, surrounded by deep, threatening bunkers with heavy sand. Getting in position for a short approach isn’t that difficult. Executing the approach, including finding and stopping a golf ball in an area that will yield a birdie putt, certainly can be. The Tournament Experience layout measures 6,698 yards from the back tee (6,017 front), while the Championship Experience stretches to 7,228 yards from the back (6,334 front).

How did Wilson do it? Most “nine-hole” courses allow players to get in an 18-hole round by simply constructing two different teeing grounds on each of the nine holes, and players use the alternative teeing ground the second time around. Sunnylands’ layouts are completely different. Players may occasionally recognize a certain green, or a certain corridor, or the famous “First Nations” Totem Pole, when they encounter them for the second time. But the angles have changed, the distances have been altered, even the requirements for par may have changed.

The totem pole, commissioned by the Annenbergs and built by Henry Hunt of the British Columbia-based Kwakiutl First Nation, was installed specifically as an aiming point on the 418-yard, par-5 fifth, and the 308-yard, par-4 16th. Reachable in two, No. 5 wraps around a pond right of the fairway. The tee box for No. 16 sits some 100 yards away to the right, where players are tempted to go for the green by driving over trees and the water hazard. Or, one can play it safe and aim at the Totem Pole — just as they did on No. 5. 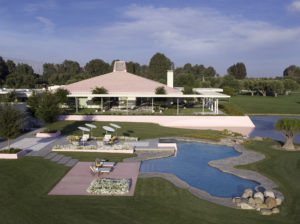 The totem pole is just another example of the Annenberg’s simultaneous love of golf, culture and folly. Other stately-yet-whimsical attractions on the golf course includes the Delos Bench and the Chinese Pavilion. The bench, made of white marble and added in 1979, is located just right of No. 3 fairway, and was inspired by a trip to the Greek Islands. The pavilion was installed in 1976, and served as the site of many on-course lunches. A mausoleum was added in 2001, where the Annenbergs are interred on property. Now the U.S. flag and Sunnylands’ pennant fly every day.

The estate offers three types of tours; the Historic House Tour, the Guided Estate Bird Tour and the Open Air Experience, which canvases the estate grounds. As for touring the golf course, the best you can do is crane your next and look for tees and flags as you enjoy one of the tours. That’s as close as you’re going to get. Unless, of course … #2020

FAQs SUNNYLANDS WON’T ANSWER (but we will):

If you’re at Sunnylands as part of a high-level diplomatic retreat.

2. Who were the last people to play here?

They know, but they’re not telling.

3. How much is initiation fee?

You cannot join. It’s not a club.

4. How many rounds a year are played at Sunnylands?

They don’t know, it doesn’t matter, and it’s not many.

5. Can I arrange a retreat?

If you are calling on behalf of the State Dept./White House.

IF SUNNYLANDS COULD TALK

* Frank Sinatra marries Barbara Marx, July 11,1976. Invited guests weren’t told they were attending a wedding, for fear the news might slip to the media. Reporters found out anyway, and several gathered at the estate gates. When Leonore Annenberg learned of their presence, she had lemonade sent out.

* Queen Elizabeth II and Prince Philip of England visit Sunnylands for a luncheon, February 1983. The Annenbergs befriended the royal family during Walter’s time as ambassador to the U.K., and during their visit to the West Coast, the royal couple blended the Annenbergs’ lunch invitation into their itinerary. Prince Charles preceded his parents at the estate, having visited in 1974.

* Richard Nixon regroups at Sunnylands, 1974. After resigning the presidency on Aug. 9,1974, Nixon found himself taking solace at Sunnylands shortly thereafter. On the day he was pardoned — Sept. 8,1974 — Nixon wrote in the Sunnylands’ guest book: “When you’re down, you find out who your real friends are. We shall always be grateful for your kindness and loyal friendships.”