A Public Work Of Art: The Evolution of Torrey Pines

Back in the late 1980s, Torrey Pines couldn’t have attracted the U.S. Open if San Diego had promised each of the USGA’s executive members a mansion on the cliffs in La Jolla.

Not unless the USGA’s criteria for the national championship changed from “tough track” to “dog track.”

Torrey was a mess. There was hardpan the consistency of concrete everywhere on the heavily played municipal course, and where there was green stuff it was terribly infested by dreaded wire grass. The sprinkler system was essentially hoses and whirligigs.

It was fairly amazing that the South and North courses hosted PGA TOUR events straight through from 1969, although they were barely up to professional standards. There were quite a few tournament years when just about everything was marked off as ground under repair, including the fairways.

The staffing was ridiculously small — about seven people per course. If the piece of land had not been so stunning, perched next to the sparkling Pacific, the TOUR would have fled. 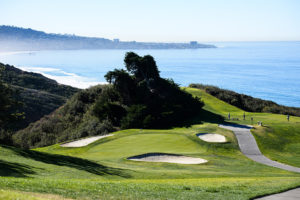 In 1990, then-PGA TOUR Commissioner Deane Beman met with Tom Morgan, the Century Club’s tournament director at the time, and didn’t pull any punches with his baseball analogy.

“In the era of domed stadiums,” Beman said, “you’re playing on a sandlot.”

That’s when John Walter was hired as the new city golf manager. He worked through the city’s bureaucracy to get manpower and get the course back in shape and, numerous managers later, Torrey Pines is arguably the best-maintained municipal facility in the country; and few — if any — can match its professional golf history.

Those guys show up for only one week per year, though. It is the local golfers’ fervent support of Torrey Pines that kept the courses viable in their early years, and now that Torrey is on many a bucket list, it is out-of-town dollars that supplement the green fees for San Diegans.

There still are lines that form in the early morning to get the “Dawn Patrol” slots before the reserved tee times begin, but at $61 weekdays/$76 weekends for city residents to walk the South, there isn’t nearly the demand as in, say, 1986, when a local paid $8.25 to play and non-residents forked over $13.25.

In the old days, golfers on Friday and Saturday nights pulled their cars into the parking lot at midnight. The entire system was self-policed. It was like a game of “tag.” Once the next car arrived, that guy was responsible for checking in the following guy. By 4:30 a.m., the coffee shop opened, and if you slept in and got there at 5, you might not get out until noon.

As one “Dawn Patrol” regular put it back in ‘86, “You meet the nicest guys in town out here. It costs thousands to join a country club and too often it’s just a bunch of rich snobs. I’d much rather play out here with these guys.” 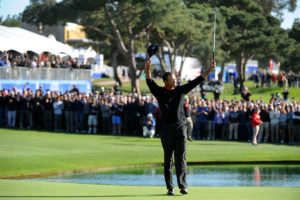 It’s been an extraordinary lifetime for this plot of land that in the early part of the last century was 1,162 acres of dusty, barren terrain with no trees. Torrey Pines Mesa became the perfect spot for the Army to set up the mini-city (population 40,000) that was Camp Callan during World War II. Before those colorful hang gliders floated along the cliffs’ edge, Air Corps planes towed targets so soldiers could practice with their 90-millimeter guns.

The Army base closed after the war, the land went back to the city, and for a while they held automobile races on the mesa, spurring a proposal that they build a track that would host “the Indy 500 of the West Coast.”

The city councilmen apparently liked golf better, and they allocated $506,981 to build one course at Torrey Pines. They eventually got two at the suggestion of Pasadena architect William Bell Sr., one of the most prolific course designers of his time.

The money ran out, though, and the first superintendent, Don Makie, had to finish the construction with a city crew. To create some of the contours in the courses they busted up the concrete slabs of Camp Callan and tossed dirt on them. Sand for the bunkers was trucked in from Torrey Pines State Beach, and saplings nurtured in employees’ backyards were used for landscaping.

The South Course opened first in June 1957, but it was far from a jewel.

“It was more or less a cow pasture,” Makie once told the San Diego Union-Tribune. “It was just a long, uninteresting slugger’s golf course.”

DAWN OF THE OPEN

Fast forward to the late summer of 2001. Torrey Pines had once again become a construction zone. Other than the trees, it was all churned dirt, thanks to the renovation taking place. Architect Rees Jones, the “Open Doctor,” had gone to work.

In 2000, San Diego attorney and former Century Club President Jay Rains had met Jones about a possible South Course redo with an eye on hosting a future U.S. Open. Jones responded: “This is one of the greatest canvases an artist could have.”

The work, financed by a group of prominent San Diegans, got done, and Torrey South became the first city-run course to be awarded the national championship. 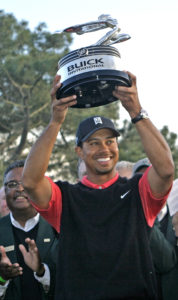 On the eve of the 2008 U.S. Open, then-USGA Executive Director David Fay said, “I can tell you we’re all really juiced about this one. This should be a memorable Open.”

He had no idea. Late on Sunday afternoon, Tiger Woods drained possibly the most memorable putt of his career — certainly the most replayed — and went on to beat Rocco Mediate in a scintillating 19-hole Monday playoff. Torrey Pines not only solidified its standing as a San Diego treasure, but as an iconic course on the world map.

For Woods, few of his 14 major wins were more special than that one, achieved on the land where he played his first 18 holes on a championship course, touring the North with his “Pops,” Earl. Woods’ mojo at Torrey was unmistakable. There, he won a Junior World title, seven regular TOUR events, and the U.S. Open playing on a broken leg.

The buzz about the Torrey Open was so loud that it figured the USGA would quickly announce a return. It took its sweet time until the PGA Championship began sniffing around, and then in March 2014 the 2021 U.S. Open was awarded to the South Course.

“When you look back at 2008, it was magical,” USGA executive director Mike Davis said. “It’s an event that people aren’t going to forget anytime soon. In my mind, it wasn’t a question of if, it was a question of when an Open would come back.”

Drop by Torrey Pines on any afternoon nowadays and you’ll see obvious tourists, some not even golfers, walking around with plastic bags stuffed with souvenirs. This isn’t just a golf course, but a tourist attraction. And like Disneyland, a return trip brings a familiar comfort, though some change always seems inevitable.

The North Course is scheduled to undergo a major refurbishing after the Farmers Insurance Open is completed in February 2016. It’s been a controversial project, with the price tag rising to more than $12 million and Phil Mickelson enthusiastically starting the design work, only to be banned from finishing it by state contracting regulations.

Torrey regulars have their fears; they don’t want another South Course. City managers insist that won’t be the case. In the end, its merits will be judged in the eyes of each golfer, because, as Rees Jones says, Torrey Pines is a very public piece of art.