Rancho Santa Fe’s New Day: The First Home of the Crosby Clambake Steps into the Light Once Again

They laugh now about the “Dark Ages” at Rancho Santa Fe Golf Club.

There were years — decades, really — when it seemed like the majority of the club’s members wanted to drape a black cloak over the abundant eucalyptus trees on their classic 1920s layout and hide it from the rest of the world. 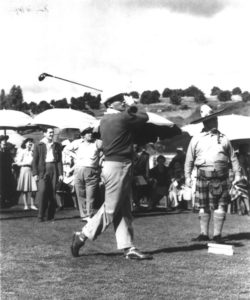 Rancho Santa Fe hosted Bing Crosby’s first pro-ams from 1937-42 and one San Diego Open in 1954, captured by hometown amateur Gene Littler, and then it seemed to disappear off the competitive golf map for nearly 50 years.

“They were all secretive. They wanted it to be their hideaway,” Chuck Courtney, the pro emeritus, recalled of the membership. “That’s the way they felt about it. They were very protective.”

The shame in that was that Rancho Santa Fe was so good, so playable, challenging, and attractive, many great golfers never got the chance to test themselves at the San Diego course that comes closest to matching iconic clubs like Riviera or Winged Foot.

Thankfully, the outlook changed at the turn of the century. The 101st SCGA Championship, won by Scott McGihon, was contested at Rancho Santa Fe in 2000, and following a $3.5 million renovation, the club produced an even bigger marquee tournament six years later: the U.S. Junior Amateur Championship.

The members showed up by the hundreds in the summer of 2006 to watch future pros Rickie Fowler, Kevin Tway, Harris English, Michael Putnam and Peter Uihlein.

“The Junior Am really kicked it off,” said Ken Bien, a 20-year member and one of the lead organizers of the U.S. Junior. “The reaction was, ‘This is what we should be doing.’”

“The Ranch,” as it is often called, hosted an AJGA Rolex girls’ event a couple of years later, and this summer the SCGA Amateur Championship returned, thanks to Bien’s standing as the current SCGA president.

“It’s a timeless golf course,” Bien said. “… It’s a good design. Every hole has something special that you’ll remember.”

The irony in those years of trying to keep people away from Rancho Santa Fe is not lost on those who know its deep history. There was a time, in the depths of the Great Depression, when the course was so desperate for play that a single dollar would buy a round there. 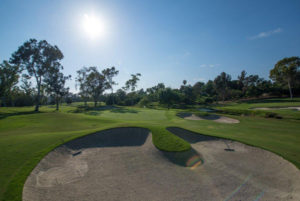 Developer L.G. Sinnard’s 1921 prediction that “enough men of large means” would become homeowners in Rancho Santa Fe had not come to fruition, probably because those men had lost their means in the market crash of ’29.

In 1934, the golf club had only 55 members, who’d paid $600 for their access, and avid players could barely scrounge up a regular foursome. Bankruptcy loomed.

Thus, the club produced a $1 promotion, but even that failed miserably because Rancho Santa Fe was too remote and its only access road too rugged.

It all seems so strange and laughable now. The “covenant” of Rancho Santa Fe, nestled among acres of imported eucalyptus planted originally to harvest railroad ties, is one of the wealthiest enclaves in America.

And the Rancho Santa Fe Golf Club, which plays nearly the same as when Alister MacKenzie disciple Max Behr designed it in 1927, is arguably the county’s brightest golf jewel.

The grounds have been traversed by some of the all-time greats in sports and entertainment, from Sam Snead and Byron Nelson to Jim Thorpe and Ty Cobb.

If not for Crosby and his Clambake, who knows if Rancho Santa Fe would exist today? Probably, but with a little tournament he dreamed up because he wanted to play with the pros, the crooner sailed the club out of its financial woes by the early ’40s.

Looking for a respite from his worldwide fame, Crosby bought a home in Rancho Santa Fe in 1934 and passionately played golf nearly every day with San Diego tour pro Bill Nary.

Crosby loved putting together games with owners, trainers and jockeys from his new Del Mar Race Track, but he yearned for more action, and in 1937 he inaugurated the Bing Crosby Pro-Am, putting up every cent of the $3,000 purse.

For the next six years, Crosby attracted the era’s greatest pros in what would become the model for today’s pro-ams. It was the beginning of the current AT&T Pebble Beach National Pro-Am, where Crosby moved it in 1947 after a four-year hiatus during World War II.

Outside the entrance to Rancho Santa Fe’s locker rooms are framed pairing sheets from those days, and they are a fascinating glimpse into the times.

Among the pros were Henry Picard, winner of the fifth Masters, Nelson and Snead (whose name is misspelled “Sneed” in one program). 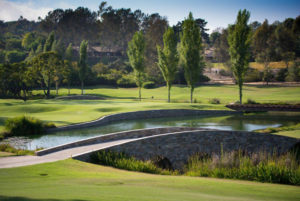 The celebrities included Cobb, “Tarzan” Johnny Weismuller, Thorpe, Grantland Rice and Babe Didrikson. In the 1942 program, Didrikson, the greatest female golfer of her day, was listed as “Mrs. Geo. Zaharias.”

One other notable name among the tee times: H. Bogart, Amateur. Did they call him Bogie on the golf course?

Snead won the $500 first prize in three of the six Crosbys played, and The Ranch became one of his favorite courses. Years later, he would give a young Arnold Palmer his first tour of the track.

Bing’s tournament had such a feeling of fun and camaraderie that someone — Nary believed it was Crosby crony Phil Harris — dubbed it “The Clambake.” Funny, Nary thought, because he never saw any clams cooked there.

“We ate mostly barbecued steak and refried beans,” Nary recalled in 2006, six years before his death.

When Crosby bought a house at Pebble Beach in 1943, the tournament was destined to move, but he left Rancho Santa Fe in far better condition than he found it.

The club would acquiesce to only one more major event over the next 60 years, agreeing to host the third San Diego Open in ’54. It was a fortuitous step for a young Navy guy and local, Littler, the reigning U.S. Amateur champ. Littler, a future member of the club, beat the best-scoring pro, E.J. “Dutch” Harrison, by four shots and took home not the $1,800 first prize, but a sterling silver tea set. Littler didn’t turn pro until two days later.

Years later, Littler ribbed Harrison, saying, “I’ve still got the silver service at home. Do you still have the money?”

Courtney first played The Ranch in the mid-‘50s, although under clandestine circumstances. In high school and living in La Jolla, Courtney and his buddy, Jim Brown, would drive up to Rancho Santa Fe, park on the street by the 13th hole and sneak on. They’d play a loop of six holes that took them back to the car.

“I think only guy we saw out there was (actor) Victor Mature, and he didn’t care,” Courtney said with a grin.

Nearly 30 years later, Courtney became the head pro and served in that capacity for more than two decades.

Not since the Clambakes has the club been a celebrity hangout, although ex-athletes still love it. Former major league pitcher Kirk McCaskill is among the men’s club champions, and other members include former baseball players Charles Nagy, Mark Loretta and Mark Grudzielanek, and Golden State Warriors coach Steve Kerr.

Once at the club, Bien said, they’re just golfers soaking up The Ranch’s understated elegance.

“For the most part, people leave their ego at the car,” he said. “They don’t care what you’ve done or how much money you’ve made. Everybody is kind of equal. That’s what this place has always been. These people have done well in life, and they love it here.”

It’s nice that they share it every once in a while, too.

Helping Handles: Get a Grip on Your ...