Scent of a Birdie: A Q&A with NCIS: Los Angeles Star Chris O’Donnell

As a film and television actor, Chris O’Donnell has made quite a name for himself. He first rose to national prominence as a 22-year-old in 1992’s “Scent of a Woman,” where his emerging talent was obvious against a blind, impossible-to-get-along-with former military colonel played perfectly by Al Pacino. Dozens of big and small screen roles followed, including two turns as Robin in “Batman” movies. Since 2009, he has played Agent G. Callen on CBS’s “NCIS: Los Angeles,” where he is paired with LL Cool J (who plays Agent Sam Hanna), and the two are dispatched across the Southland solving issues of national security. FORE caught up with O’Donnell, an avid golfer, as he prepared to play in the AT&T National Pebble Beach Pro-Am, an event he calls his “personal Super Bowl.” 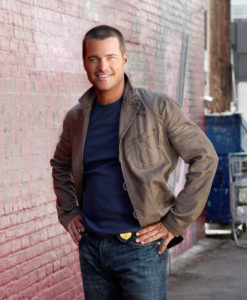 FORE: How did you get interested in playing golf?

O’Donnell: When I was a young kid growing up in Michigan, our summer home backed up to a little par-66 golf course called West Shore that unfortunately is no longer there. During the day, some of my siblings (Chris is the youngest of seven children) and I would sit out on the 15th hole and sell lemonade and after people were done playing, we’d go and play holes 15, 16, 14 and 13 and we’d play that loop over and over. We also belonged to a golf club in Chicago called Exmoor CC and I used to do some of the junior golf stuff there. I loved it, but was never quite as good as my older brother, John, who is still a very good player and has actually played in a few U.S. Amateurs and been club champ a couple times at The Los Angeles CC. Then, as I got older and started acting, I found myself with lots of free time in between productions and the full addiction took over.

Have you had much golf instruction?

Aside from taking a few junior clinics, the only consistent instruction I’ve ever had was from a pro named Ed Oldfield, Sr., now a member of the Illinois Golf Hall of Fame. When I first started playing celebrity tournaments, I think it was the Lexus Challenge, I was probably a 14-handicap and within a few years after working with Ed, he got me down to my lowest ever handicap at 4. Now, I’m probably around 8 or 9 because I’m not playing that much. Unfortunately, Ed is in Chicago during the summer and Arizona in winter and I’m in L.A in winter and Maine during the summer, so our paths don’t cross very much. But to be honest, between my five kids and work, I don’t have the time to really focus on my game. These days, I seem to spend more time caddying for my two boys with their tournament golf than playing myself.

Which PGA TOUR golfers do you enjoy watching?

I always love watching the swing of Ernie Els, who I think has the greatest tempo I’ve ever seen; or even a guy like Freddie Couples and how he gets through the ball to such an amazing finish. So many of the young guys are so athletic that when you suddenly find yourself in a 45-year-old body, you can’t do what these young kids are doing. I sit back like everyone else and am amazed at what Jordan (Spieth) is doing with a swing that looks very simple and the ability he has to score the way he does. It’s uncanny. 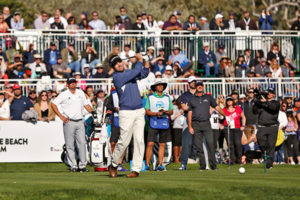 You are an SCGA member through your affiliation with Bel-Air CC and The Valley Club of Montecito, and list Cypress Point and Pebble Beach as your favorite courses. Do you prefer the classic courses?

I’m definitely a fan of the “Golden Age” of design. When I was younger, I was on a mission to play the Top 100 courses in the world, certainly the U.S. I’ve done pretty well, having played around 60. So, having seen many of the great courses, it’s given me an appreciation of great course design. It’s not unlike when you taste excellent wine; average wine doesn’t taste quite as good.

I have yet to play Pinehurst or Bethpage. I’d love to go play Crystal Downs and I’m excited to visit Mike Keiser’s two new courses, Cabot Links and Cabot Cliffs, in Nova Scotia, since they’re not far from where I spend my summers in Maine. There are great courses down in Australia I’ve yet to play like Royal Melbourne. One of the great things about golf is there are always new amazing courses coming along.

Who is in your dream foursome?

Without question, it would be with my three sons. Last year, the two eldest played in a two-day junior tournament in Palm Springs and the four of us went out there and stayed in a hotel, were out on the course every day, and went to dinner. It was so much fun and I wasn’t even playing. I look forward to those golf weekends and I can’t wait until I take my kids over to places like Ireland and Scotland to experience those great courses. It’s a big part of what I love about the game

Is it true you once served hamburgers to basketball legend Michael Jordan?

Yes, I did. As part of building my career as an actor, I was in dozens of commercials and I did one for McDonalds. But to this day, although I’ve played in many tournaments where Michael has also played, we’ve yet to play together in the same foursome. I’d love to play with him sometime, especially being a hometown Chicago guy. But whenever I do see him, I remind him about our commercial together and he gets a chuckle. 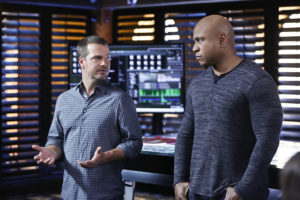 If given the opportunity, which golfer would you like to portray in a movie?

Which trophy would you prefer on your mantle, an Oscar or one for winning the AT&T Pebble Beach Pro-Am?

The Oscar versus Pebble is a tough choice. For me, the AT&T is the greatest weekend of the year. It’s my personal Super Bowl. I’ve made the cut three times (best finish was 2nd place in 1996, but rain cancelled the tournament after 54 holes) and really believe I’m going to win the Pro-Am at some point. Getting my name on the first tee at Pebble Beach would be the coolest thing in the world; but they since don’t give away that many Academy Awards to actors, I’d much rather have the Oscar.