A Centennial Celebration: 100 Years of Golf at Griffith Park

George C. Thomas Jr. drove the first ball at the opening ceremonies in August 1923 for Griffith Park’s second municipal golf course. Thomas had designed the new 6420-yard, all-grass layout at the urging of the father of Southern California golf, then-SCGA President Ed Tufts. Nearly 100 years later, and thousands of golfers are still making their way around that track each year, driving ball after ball into those grass fairways which once existed only in the mind of Thomas.

Thomas waded through the sand and brush of the newly acquired land of the Griffith Reservation and found the routing for the course that became known as the Riverside links. Later, it would be renamed in memory of President Warren Harding, who had died the night before the planned official opening, and began the tradition of naming Griffith Park golf courses after American Presidents. 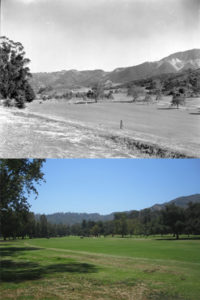 George Thomas came to Los Angeles from Philadelphia, after a stint as Captain in the Army Air Corp during the World War I. Thomas was heir to a very large banking fortune, and was a dedicated yachtsman, aviator, sport fisherman, farmer, gardener and low-handicap golfer.

His design career started back east as well, having designed the Whitemarsh Valley Country Club course on an estate that his father had bought for him at Chestnut Hill (near Philadelphia), as well as founded the Donald Ross-designed Sunnybrook Golf Club (Pennsylvania) in 1913. Thomas was also a founding member of George Crump’s Pine Valley (New Jersey), which is still considered one of the best golf courses in the world.

After the war, Thomas moved to Los Angeles, and was soon superintendent of construction for English golf course architect Herbert Fowler’s new North and remodeled South courses for The Los Angeles Country Club. His design work for Griffith Park was for 36 holes, which included plans for Harding as well as a second all-grass 18-hole course, which opened four years later in 1927 as Wilson Memorial.

But golf had first started in Griffith Park when the Tom Bendelow-designed Municipal Links No. 1 opened late in 1914. It was Tufts of the SCGA who began the campaign to convince the Park Commission and the Los Angeles City Council to approve a plan for the first 18-hole municipal golf course west of the Mississippi. With the full support of park commissioners Joe Lippincott and Henry Keller, the first municipal links became a reality. The golf course cost $13,000 and was extremely popular with beginners and experts alike, becoming the cradle of public golf in Los Angeles.

The maintenance-free course had round, flat, sand-and-oil putting surfaces 30 feet in diameter, asphalt teeing platforms and natural fairways. A very fine velvety green moss would cover the course after the rains during the winter golf season, but the rest of the year the course was likened to “cow pasture pool.” Unlike with grass greens, a stroke played to the hole on the smooth surface of a sand/oil green would likely bounce off into the hinterland.

MUNI GOLF TAKES OFF IN L.A. 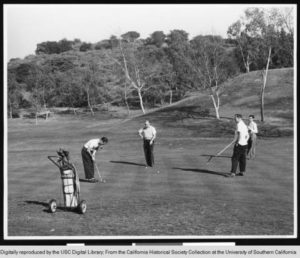 The Griffith Park Golf Club formed to organize competitions in 1915, and trophies for those early tournaments were put up by San Gabriel’s Country Club’s George Cline, Tufts and even Syd & Charlie Chaplin. Realizing the allure of Griffith, Bing Crosby organized his first golf tournament at Griffith Park in 1933.

In 1915, the first professional at Griffith Park was Canadian Jimmy Law, the nephew of British Prime Minister Alexander Bonar Law. He was joined by teaching guru Alex Morrison in 1916, who took to the stage in the vaudeville act “Lesson in Golf” before returning to teach at The Los Angeles CC in the 1920s. Pat Patterson, who grew up on the old municipal links, became the pro in 1918, and was instrumental in founding and organizing the Los Angeles Open, where he remained as official scorer for years. Other pros over the years included California State Junior Champion Bobby Ross, Bobby Vanderlip, Paul Scott and finally 1961 PGA champion Jerry Barber, who took over with his son Tom in 1965.

Barber’s claim to fame, however, may be that he was the first professional to win on TOUR using a yardage book, due to his astigmatism, and was also known for introducing the full-fingered golf glove. But his mark at Griffith was left, as the Barber’s are approaching their 50th anniversary in Griffith Park next year, with Tom and younger brother Roger still running the business, and grandson Jeff Barber working as head teacher at the Tregnan Junior Golf Academy. 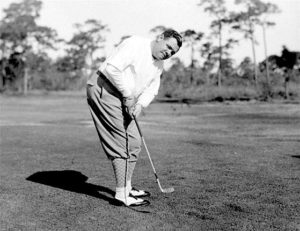 The first Los Angeles City Championship was played on the Municipal Links in 1917, and was won by grocery store vice president Elmer Ralphs of San Gabriel Country Club. Ralphs started as a caddy at The Los Angeles CC and would win the city championship at Griffith Park for a third time in 1920, allowing him to keep the perpetual trophy. By 1920, the old sand Municipal Links was considered one of the best tests of golf in Southern California, with fairways equal or better than the country clubs and with play open to all comers.

It was during the winter of 1920 that baseball great Babe Ruth’s manager found him out playing on the Griffith Park Municipal Links, where he officially signed his contract to join the New York Yankees. Many celebrities including motor racing star Ralph De Palma, aviators from the Glen Martin airfield next to the links, politicians and movie stars played the old links until its demise in 1925.

When Wilson Memorial opened in 1927, it was Tufts officiating once again. A professional exhibition match made up of LA Open winner Bobby Cruickshank, Johnny Golden, Charlie Guest and Ed Dudley played the course upon opening. 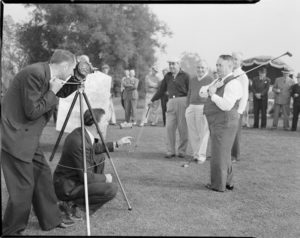 Wilson was the third 18-hole course in Griffith Park, and would use some of Harding’s holes, plus new ones that were added to both courses. The renamed, nine-hole Sand Memorial would survive beside them both for a while, until it was rebuilt with federal infrastructure funds into an all-grass course that was appropriately named the Roosevelt Memorial in 1937. The federal money also paid for a new clubhouse and a new irrigation system for all three golf courses.

William Johnson, who had worked for legendary golf course builder and architect Billy Bell at Royal Palms Country Club near San Pedro, was hired as superintendent of Griffith Park in 1932. Johnson and Bell remodeled all three courses. Wilson’s greens were re-contoured and its fairways reshaped, with both courses lengthened and worked into the form needed to host the Los Angeles Open from 1937 to 1939.

The Los Angeles Opens held at Griffith Park are memorable for the winners; Harry Cooper (1937), long hitter Jimmy Thomson (1938) and Jimmy Demaret (1939). Gene Sarazen, Joe Kirkwood, Leo Diegel, Lawson Little, Ben Hogan, Byron Nelson, Sam Snead and many other greats played and walked the fairways of Griffith Park during those three LA Opens, unable to capture a victory. In the 1938 event, SCGA Hall of Famer Babe Didrikson became the first women to play in an official PGA TOUR event. The highlight for Babe was being paired with her future husband and pro wrestler George Zaharias. Zaharias went on to win the Women’s Los Angeles City Championship in 1944.

During World War II, Griffith Park’s golf courses were modified, with Wilson losing three holes that became the Crystal Springs picnic area, while other holes were reworked to accommodate the changes that would last until the freeway construction in the late 1950s. Despite public protest and successful court cases to block the new freeway’s path, bulldozer’s turned up one morning on the Harding golf course, and the fight was lost.

Once construction was completed and the dust had settled, both Wilson and Harding were still mostly intact. Today, Wilson includes 11 George Thomas-designed holes, and Harding still has 10. Up on the hill next to Harding’s first fairway is the remains of a beautiful 193-yard, Thomas-designed par-three, which was played as hole No. 18 in 1923 and hole No. 16 after 1927. At some point in the 1960s, it was abandoned. 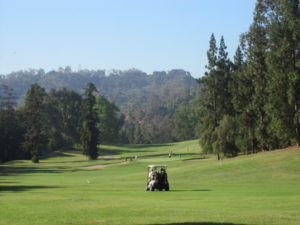 Other than the planting and growth of thousands of trees around both courses, and the further lengthening of some holes, today’s Harding and Wilson golf courses are closer to their original classic golden age state than most other golf courses in Southern California. The strange water hazards and concrete paths that were built in the 1980s were added to keep golf carts away from the greens.

Griffith Park has been the heart and soul of municipal golf in Los Angeles for 100 years, and with the full support of the Southern California golf community, will continue to bring enjoyment to millions of golfers in Southern California, and from around the world, for years to come.