Wending through a canyon in the La Puente Hills above La Habra is a 95-year-old golf course with a Best of Breed pedigree, a club founded by the same individual who subsequently developed fabled Bel-Air CC and was part of the group behind Riviera CC. Its design DNA is also found at Minnesota’s Interlachen, Olympia Fields in Chicago and the Olympic Club of San Francisco. But aside from Gene Sarazen and Tiger Woods, who at different times held its course record, relatively few players know much about the Hacienda Golf Club, one of the first in California born during the Golden Age of Golf Course Architecture. 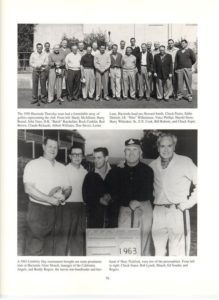 Indeed, for a club that’s hosted three SCGA Amateur Championships, Hacienda operates in relative anonymity, once wrapped in a degree of ambiguity.

“It’s very true that many dedicated golfers who belong to clubs just a few minutes away don’t know we’re here,” says Hacienda general manager Frank Cordeiro. “We’re tucked into the hills on a winding road that was built during the early 1900s. There are no businesses in the neighborhood, so unless you’re coming to the club you don’t see us. What’s more, for many years the record on who exactly designed Hacienda appeared somewhat uncertain.”

It’s clear now that Willie Watson, the prolific architect of more than 100 U.S. golf courses built during the early 20th century, sketched Hacienda’s strategic routing through the canyon, over barranca and a natural creek — a route that remains unchanged today. And though the course routing is the same as opening day, much else has changed, including the growth of trees and shrubs that now encroach on fairways that once crossed wide-open landscape. During a 1964 remodel, the creek had been forced into underground pipes. And as with any aging facility, greens, bunkers, drainage and irrigation didn’t meet modern standards.

In 2005, Hacienda turned to Architect John Harbottle III, a proven master at modernizing old courses while restoring the challenges presented by the original designer. “After his first site visit John was very curious about who designed the course,” says Cordeiro. “Some books credited William Bell, while our research pointed to Watson. John studied old aerial photos, did the math on how far players hit the ball with wood-shafted clubs, which determined the placement of hazards, and concluded the layout more closely followed Watson philosophies and routing than a Billy Bell course.” 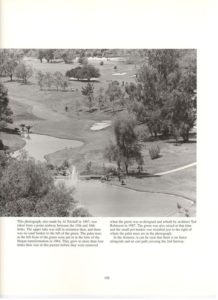 Harbottle, who had previously renovated several other Watson designs, added length to Hacienda, bringing the par-71 course from an original 6,152 yards to 6,955. He adjusted the placement of modernized bunkers and brought back the creek, so that golfers face the same shot values as players in the Roaring Twenties. Alas, as fans of course architecture are painfully aware, the vibrant 53-year-old Harbottle died of a heart attack in 2012, in the prime of his career.

While Hacienda’s primary restoration was completed in 2007, Harbottle’s master plan included elements that are still being implemented. More importantly, his resurrected design is a legacy that’s created a fresh new chapter for a venerable club founded by another man named Bell — a visionary tycoon and perhaps the most influential mediocre golfer in Southern California history.

A darn good tennis player, Alphonzo E. Bell had enough skills to win the Inter-Collegiate Tennis Championship and a pair of Olympic medals at the 1904 Summer Games in St. Louis. He proved to be an even better businessman. After striking oil on their ranch in Santa Fe Springs, Alphonzo and his father founded Bell Petroleum Co, which in pre-Depression California earned the family millions. In the ultra-competitive “There Will Be Blood” oil boom era, Bell doubled-down through lucrative real estate ventures.

One of his first real estate acquisitions was the piece of land in the La Puente Hills. Bell was determined to create a golf course with a demanding, championship character. He thus turned to Watson, the Scottish native who had previously designed The Minikahda Club in Minneapolis, San Francisco’s Presidio and among others, Interlachen, the Olympic Club and Olympia Fields.

Watson sketched an ingenious routing that used the undulations in the largely barren canyon as strategic waypoints, with forced carries over the gnarly barranca and the creek guarding several greens. He devised an elegant and balanced variety of short, medium and long par-3, -4 and -5s, which demanded use of every club in the bag. A fairly long and difficult front nine is followed by what Watson called a “sporty” back, with tempting rewards and risks to heighten tournament and match play drama.

Although pleased with Watson’s initial work, Bell had the luxury and financial wherewithal to bring in several other noted course designers to make suggestions, and here is where Hacienda’s design provenance grew cloudy.

“Bell brought in George C. Thomas, E.B. Tufts and Charles Mayo,” explains Cordeiro. “The front nine opened in 1920 and the back in 1923, and writers from the period gave Mayo a great deal of credit for the back, which is why some books call it a Watson and Mayo course. It’s also entirely possible that Billy Bell came in for a look.” While unrelated, the shared last name with the club’s founder may have led to confusion that on some lists gave architect Bell inadvertent credit.

To supervise the construction, Hacienda hired Charles Shaw, who assisted in the building of The Country Club at Brookline and the San Francisco Golf Club. In 1921, young Gene Sarazen played an exhibition match against local professionals and shot 70 while playing nine holes twice, setting Hacienda’s first course record. By the time Hacienda’s first clubhouse opened in 1927, its double helix could be found throughout Southern California. 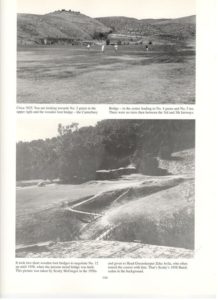 While serving as Hacienda’s president from 1920 to 1925 and working with a group that founded Riviera CC, Bell launched yet another golf course project on 600 acres he’d acquired in Pacific Palisades. Bell initially offered the job to Watson, whose workload compelled him to decline; the design of arguably the most exclusive and highest-rated club in the state went to Bell and Thomas, the latter of whom also worked on Los Angeles CC North.

Meanwhile, the still new Hacienda, called “the jewel of the canyon,” attracted members from Fullerton, Whittier, La Habra and north Orange County. The Sansinena family, which had once owned the land, also joined the club, and Jose Sansinena’s daughter, Marian, became a club champion. Like most private clubs Hacienda struggled through the Depression, but when a nearby nursery went out of business, it purchased a bargain basement load of plants, shrubs and trees that dressed up the barren hills.

The club has seen its share of great players. In 1994, 18-year-old Tiger Woods won the SCGA Amateur, wearing a red shirt during the final round and blitzing the field by 10 strokes, while setting a course record 62. According to Woods, it was the start of his signature look on closing rounds.

Ten years later, Hacienda began to show its age. Bunkers and greens didn’t drain and were difficult to maintain, and conditions made the course play differently than Watson intended, the passage of time notwithstanding.

Though John Harbottle had many exceptional original designs to his credit, renovations and restorations were his specialty. He had a reputation for not imposing his ideas on the original intent, instead bringing courses back to what their original designers intended, underpinned by state-of-the-art agronomy, irrigation and drainage.

As for Hacienda, “We wished to bring the course up to date for today’s player and their expectations,” Harbottle told Fairways + Greens. “However, we also wanted to restore the classic old character of the design (utilizing) the natural hazards the way Watson intended.”

During the nearly year-long project, “John had a lot of the encroaching brush removed from the flanks of the fairways, which gave players more chances to recover from errant shots,” says Cordeiro. “Significant tree removal opened up vistas that had been blocked for years. New greens were built to USGA specifications, with major irrigation and new drainage.”

While Harbottle restored the intent of bunker placements, Hacienda’s new traps have a distinct Harbottle touch found in most of his designs: dramatic raised edges framed by taller grasses, straight out of Alister Mackenzie and A.W. Tillinghast. “The new bunkers,” Harbottle said, definitely “look more ‘Golden Age’ than their predecessors.” 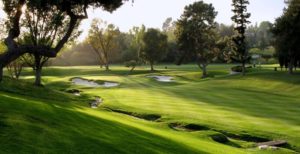 Fifty years ago there were numerous bridges crossing barranca between fairways and greens. Today, the rugged barranca is apparent only on holes 4, 5 and 12; elsewhere, the feature is smoothed and made part of the fairway or rough, while remaining ridges in the terrain and the restored creek in the mid-section of the course bring back original strategic elements.

“We think variety is the most important element in golf course design,” Harbottle once said about the basics of good architecture. “That’s what holds your interest in a course. Hole lengths, doglegs, hazard placements, green angles and slopes are all varied, so no one particular shot shape will be rewarded hole after hole. Although there are several ways to play each hole, there’s usually only one that’s best for a particular skill level or course management strategy.”

Those sentiments clearly helped guide John Harbottle’s restoration of Hacienda to a modern course that would make Willie Watson proud. Today, its architectural provenance is crystal clear once and for all. The Hacienda Golf Club of La Habra Heights is officially a Watson and Harbottle design, a partnership that’s truly across and for the ages.

Rebirth of the Polo: New Generation of ...