Profiles
Home›Profiles›The World With A 7-Iron: The Faraway Travels of Bob & Anette Bush

The World With A 7-Iron: The Faraway Travels of Bob & Anette Bush

For some, golf travel conjures visions of a dream trip to Scotland for golf on the mother links, or a week at Bandon Dunes with friends, or even a quick overnighter to a favorite local getaway.

For others — like Dr. Bob Bush and his wife, Anette — cushy mattresses and cherry wood-lined 19th holes aren’t what they’re looking for when determining a destination. If a path less traveled is available, they’re taking it. And they’re bringing their golf clubs with them.

Bush, a 64-year old retired orthopedic surgeon, resides in Rancho Mirage with Anette, a registered nurse. But they get around. They’ve made it their mission to seek out the rare and the unusual, including golf courses that don’t see a lot of play from tourists. This penchant often leads them to some of the planet’s most remote locations, and some of golf’s most scarcely visited courses. 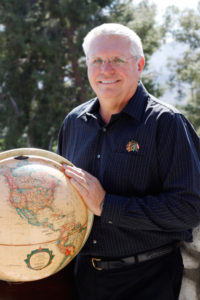 For the Bushes, golf travel means slashing a 5-iron off a two-foot strip of artificial turf into a 40-mph headwind, and hoping the ball avoids a field of rocks and lands somewhere near a patch of cleared tundra with a wind-whipped flagstick buried in a hole on the “green.” It means getting special permission from Russian President Vladimir Putin to access the Russian Polar Bear Reserve on Wrangel Island in the Chukchi Sea north of the Bering Strait. It means making space between puzzled waddles of penguins in order to hit a 7-iron on the continent of Antarctica to fulfill the goal of hitting golf balls on all seven continents.

“We’ve even talked about going to the actual North and South Poles. That would be almost the ultimate,” Bush says. “I think only about 100 people a year go to either pole, so that’s one we’re still thinking about. We have a pretty short list of places still left to go, but the poles may be worth investigating.”

Not that the Bushes don’t know what golf can be. They’re SCGA members by way of Morningside Country Club in Rancho Mirage, and also members at Broken Top Club in Bend, Oregon. Bob grew up playing public golf in Chicago, and was a member of the Loyola-Chicago golf team. After attending medical school at Baylor College of Medicine in Houston, he practiced in Salt Lake City before moving to the Southern California desert in 1979. Once set up at the Desert Orthopedic Center at Eisenhower Medical Center in Palm Desert, his list of patients included several PGA and LPGA competitors, as well as some of the top instructors in the game.

When he retired 20 years ago at the age of 44, he and Anette both knew they wanted to see the world…all of it. After years of practicing orthopedic surgery, he also knew the destinations he and his wife wanted to access required good health and mobility. And he knew robust mobility was not a guaranteed benefit of maturity.

“There wasn’t a day that went by where I didn’t see someone coming into my office saying, ‘We waited until we were 65 to move to Palm Springs, and now George can’t walk, or has cancer, or had a heart attack, and we never play golf,’” Bush says. “So we decided very early to smell roses.”

Their expedition-type adventures have taken them to some of earth’s most storied, historic and often isolated destinations. They were drawn to the far away, re-tracing the paths of the great explorers and discoverers. They’ve visited Antarctica, Greenland, Iceland and the Russian Arctic. They’ve sailed the Northwest Passage, been tossed in the icy Bering Sea, mingled with isolated tribes in New Guinea and stood in the presence of the eternal line of Moai statues as they brood over their desolate realm on Easter Island.

Of course, as much as golfers love to travel, they also love to play golf, and the Bushes quickly realized the unique playing opportunities their itineraries offered. They’ve played the world’s northernmost track, Ulukhaktok Golf Course, above the 70th Parallel in the Northwest Territories; and the southernmost facility, Ushuaia Golf Club on Argentina’s Tierra del Fuego at the tip of Patagonia.

“The idea that it’s something unique is far better than playing the course itself,” Bush says. “It’s not Pebble Beach or manicured like Augusta National, but it’s so cool that you’re at the southernmost place…it became a little bit like a pilgrimage.”

The Patagonia trip afforded them the opportunity to make their excursion to Antarctica with their 7-irons and a ball each. And, with a swish of the club, they joined a rare group of golfers who have hit golf balls on all seven continents. Whether in Greenland or New Guinea, even if there’s no course, the 7-iron always makes the trip — and a swing — as their perpetual, educational world tour continues.

“At one point it becomes a religious, if not a philosophical, experience,” Bush says. “You realize your smallness in the history of the universe. The problems we face just aren’t that important.”

A Centennial Celebration: 100 Years of Golf ...