Ask for the top five basketball movies of all time, and I’ll give you “Hoosiers,” “White Men Can’t Jump,” “He Got Game,” “Hoop Dreams” and…and…I’m out. Maybe I can get to five with baseball movies: “Field of Dreams,” “Bull Durham,” “The Natural,” “Eight Men Out” and maybe “League of Their Own.” Football? “Friday Night Lights,” “Remember the Titans”…and that’s a wrap. Does “Jerry McGuire” count? Anyway, those are the big three of American sports, and I struggle to get to five. But not with golf, where I can easily give you five movies that both qualify and I genuinely like. In unveiling this list, I’m also giving you something to do during that five-hour round. Now when you get to that short par-3 and there are three groups standing there on the box, you’ll have something to discuss. So, you’re welcome.

Not sure about you, but I don’t go to the movies to find “realistic” events. It always makes me chuckle when someone’s movie review calls a picture “unrealistic.” Well, duh … it’s a MOVIE. So I’m all in on driving the green on a par-4 while taking a running start at the ball. I’m sold on putting with a hockey stick. And I have zero issue with the incorrect rule of “play it as it lies” even though a TV tower is in your way. The vibe between Adam Sandler and the delightful Julie Bowen works. I’m also forever impressed when a nice person in real life is able to capture the essence of being hated on screen. Tip of the cap to Christopher McDonald, who played Shooter McGavin. I totally wanted to punch him in the face the entire time.

Line of the film: “The price is wrong. Bi%$#.”—Bob Barker as himself

No. 4—“The Greatest Game Ever Played”

Shia LaBeouf’s life outside of movies hasn’t been very PG rated, but that’s the rating for this largely unknown Disney movie in which he starred. He does a good job too, playing young Francis Ouimet, a caddy turned winner of the 1913 U.S. Open and widely known as the “Father of Amateur Golf.” Did you know that? I didn’t until I watched the film. The period piece tackles issues bigger than golf such as the class system that put up the stop sign to poor people who wanted to play back then. It’s kind of crazy we’re still dealing with an issue like this today, but since we are, the topic hits the spot. Plus, the good guys win in the end (was there any doubt in a Disney flick?).

Line of the film: “Even in our darkest hour, we must always remember, never despair.” —Stephen Dillane as Harry Vardon

No. 3—“The Legend of Bagger Vance”

Surprised? You shouldn’t be. I could listen to Charlize Theron say “Savannah, Georgia” in her Southern belle accent all day long. The film didn’t do too well at the box office and Will Smith’s character was criticized as racially insensitive. Sorry, hard for me to buy that one. Smith is the heart and soul of the film and his role is an entirely positive one. In fact, Smith’s role of Bagger Vance is an abstract representation of God. You never fully know while watching the movie if Bagger is his own person or a part of Rannulph Junuh’s (Matt Damon) spirituality. The movie works for golfers because golfers know, better than anyone, that the sport tests your inner strength and patience more than the line at the DMV. Bagger is the angel on the left shoulder of Junuh, battling the devil on his right shoulder. Every golfer needs that.

Line of the film: “Well you lost your swing. We got to go find it. Now it’s somewhere…in the harmony…of all that is…all that was…all that will be.”—Will Smith as Bagger Vance 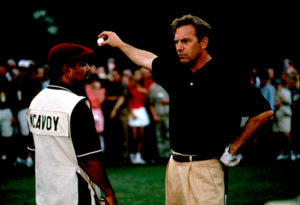 The trusty 7-iron. By the end of the film you want to grab your own 7-iron and whack David Simms (Don Johnson) over the head with it. Which means, good job with that role Don. And good job by Gary McCord. Yes, that Gary McCord, who owns a bit part in the film, but more importantly, he helped Kevin Costner learn to play golf for the film and was part of the creative force behind the “pelican on the perch” scene and the final scene, “Roy McCovoy’s 12.” Tin Cup came out in 1996, continuing Costner’s late ‘80s hot run on sports movies such as “Field of Dreams” and “Bull Durham.” The movie has it all. Good golf scenes with real and fictional golfers, comedic flair (heck Cheech Marin is in it) and the love story…Renee Russo and Costner were a perfect match.

I had no choice. This movie is totally ridiculous, but in the most delicious way possible. The characters are completely over the top, but totally quotable the entire time. We are fed golf scenes throughout, but they never take themselves too seriously. By the way, that’s why this movie is commercially successful. Golf today should take note, and stop taking itself so seriously. From dookie in the pool, to galleries screaming “Noonan!” and a greenkeeper who dreams of being a Cinderella story, Caddyshack is timeless, hilarious and iconic.

Line of the film: “Oh, this is the worst looking hat I ever saw. When you buy a hat like this I bet you get a free bowl of soup, eh? Oh, it looks good on you though.”—Rodney Dangerfield as Al Czervik

From Passion to Purpose: SCGA Board Member ...