Dividing her time between greenbacks and green grass, longtime touring pro Marina Choi has one of the most unique golf jobs in all of California. Choi, who graduated from Redondo Union High School before a solid career at Pepperdine University, serves as the Golf Professional Manager at Fantasy Springs Resort Casino and on-site Eagle Falls Golf Course in Indio, Calif., the mounded, Clive Clark design that annually proves to be one of the most popular and engaging public plays across the Coachella Valley.

Born in South Korea before moving to SoCal at the age of four, Choi enjoyed a stellar junior golf career in the Southland, including claim to the 2003 L.A. Junior Open title. While at Pepperdine, she earned West Coast Conference “Freshman of the Year” and All-WCC honors in 2005, and she was a part of a pair of conference title teams in her two years playing for the Waves, a run that included her win at the California Women’s Open in 2006. 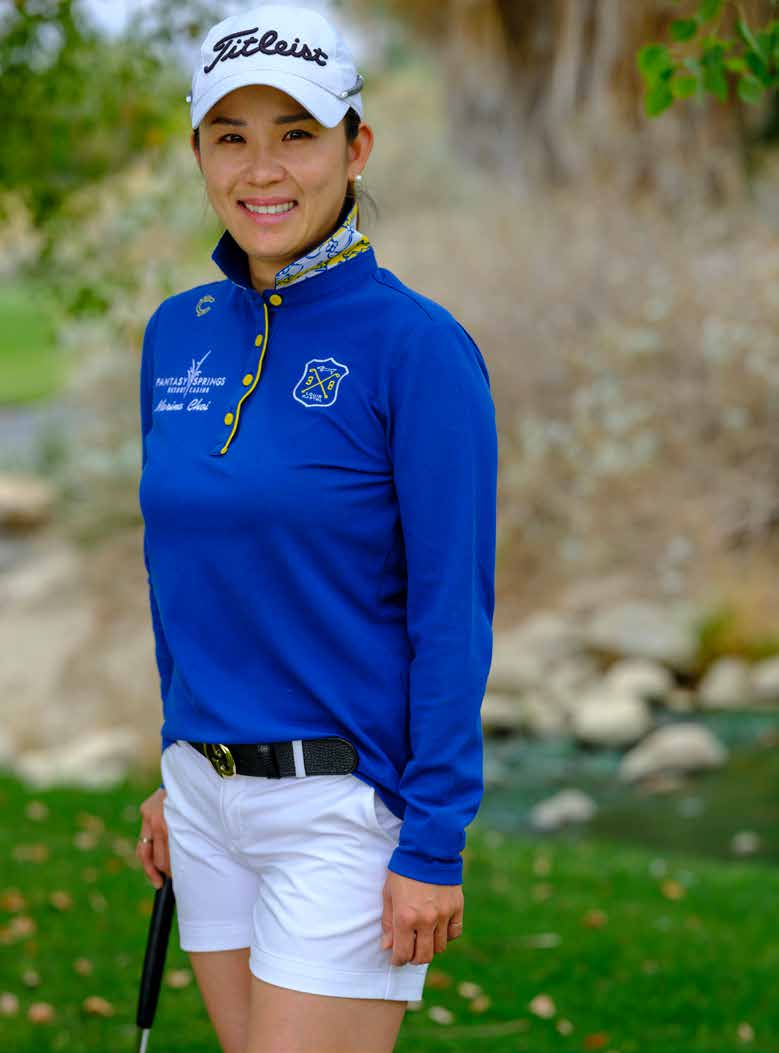 Transitioning to pro golf the following year (though she’d still get her degree in Fine Arts), Choi would go on to a decade plus run as a touring professional on the Symetra Tour, where she’d author four top-10s while battling neck injuries late in her career. Toward the close of her pro run, she started visiting Fantasy Springs and Eagle Falls GC as a desert stopover when driving back to L.A. from Florida. Hosting a popular pro-am event at the course further endeared her to the casino brass.

Choi had been contemplating a switch to coaching, and in 2017 she was hired as the inaugural head coach of the new women’s golf program at Cal State Los Angeles. Around that same time, she also received a job offer from Fantasy Springs, where she’d ultimately opt to lay her post-touring stake, working as a casino player development host for two years while sprinkling in golf duties. In 2019 she was elevated to her current position.

The job? Well, it’s one that has no known precursor in all of California.

A self-described introvert, Choi grants that coming to terms with her transition away from pro golf did take some time. But she says that she eventually opened up more and more, in part due to necessity and in part due to genuine enjoyment of the job. To find her initial groove, she relied on her eye for swing study.

“The VIP players, they win, they lose, but the service I give, I just want them to come out on the course and feel like they’re getting that different service; and it’s not just going out to play, but also providing  on-course instruction,” she says. “That can be impactful. Even when I was on tour, I never just relied on my coach; I liked to analyze swings, to help other players with their swings, and that’s all benefitted me in this job.”

“THE VIP PLAYERS, THEY WIN, THEY LOSE, BUT THE SERVICE I GIVE, I JUST WANT THEM TO COME OUT ON THE COURSE AND FEEL LIKE THEY’RE GETTING THAT DIFFERENT SERVICE.”

In a short time, Choi has earned a slate of regulars, and during the desert’s peak season months, she’s on the course with clients nearly every weekend, all weekend, and generally has dinner with the high rollers after golf. Balancing a hostess’s performance alongside play, instruction and demonstration makes for a delicate potpourri of duty. 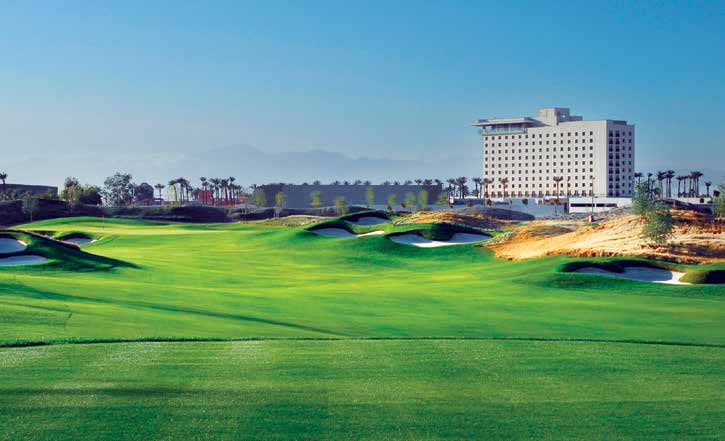 “Yes, they love to gamble, of course,” says Choi, noting that most of her VIPs play Baccarat. “I’ll have my hundred thousand dollar (credit line) player out here, and he’ll bring three other guests and their wives. I’ll spend nine holes on instruction, and then they’ll have a little game on the back nine.”

At the job’s outset, Choi learned how to temper the gambler’s mindset.

“In the beginning, yeah, they wanted to play money games with me, but I had to tell them that if they wanted to play me, I couldn’t provide the lessons,” says Choi. “But even amongst themselves, the majority of the time, they don’t really play for money, because with the instructional element they’re dropping an extra ball a lot, so I can help with their swings.”

A key club in Choi’s bag is a continued grasp  of nuance. Not all clients are winners, of course, and she’s learned the delicate dance of letting the clients bring up the previous night’s results.

“I don’t like talking about it, but when I do, I’ll admit that I play a bit dumb,” Choi says. “I never ask how much they won or how much they lost; and they may not want their guests, or their wives, to know that, either. So, I keep it to golf and random stuff; if gambling is brought up, it’s because they want to talk about it.”

And yet, this is, at its base, the casino business. Before a first day’s range ball is struck, Choi is well aware of the VIP balance sheet from the previous eve. For winners and losers alike, there’s some massage to the message, and, in the event of a bad night, a pivot toward taking attentions away from the tables.

“I know beforehand what happened, how they played, and I look at the reports,” Choi says. “So I go on that (information), along with their mood. If they’re sad, I need to be sad with them; and if they’re happy because they won, I’m like, “Hey, good night!” For the majority of the guests, I try to focus on hitting good shots and the appreciation for being out here on this great course in perfect weather. After a few good shots, they all forget about what they may have lost.”

And then, one scorecard often turns into another.

“Until we get to No. 18. That’s when a lot of them, the ones that lost, tell me they need to go win their money back,” says Choi.

Gaming outcomes aside, Choi has developed personal connections with many clients. Serving as both kinship caddie and golf guru, she keeps in touch with many clients regarding their games, often reviewing swing videos that VIPs send her way.

“If the player, the gambler, feels like I’m on their side, that I want them to win, it’s like an entertainment expense,” she says.

From clubs to cards, Marina Choi continues to pave turf with a gig curated just for her; along the fairways of one of SoCal’s most unique golf gigs, she’s seen

her own post-touring purview change not just her job title, but her personality as well.

“My socializing has gotten better, and golf helps turn on that switch,” Choi concludes. “When I give clients a pointer that has results and positive feedback, that encouragement and motivation takes them, their mind, away from the casino. So, when they go back in to gamble, win or lose, they still had an experience out here with me. And, over time, with my regulars, its really all about relationship-building; some of these people have become like family.”