Equipment
Home›Equipment›9 Things to Know from the PGA Show

9 Things to Know from the PGA Show

I’ve now conquered my 26th consecutive PGA Merchandise Show in Orlando. This year’s rendition revealed the trends and products you’ll see in golf shops and on the courses in the coming year. What’s heading your way?

Anytime Titleist debuts new Pro V1 and Pro V1x models, it’s going to create attention in the ball sector. And that’s just what happened at this year’s show, with improved versions of both. These new balls feel nice and soft, and have amazingly good performance. In fact, several companies used the industry-wide venue to introduce new soft performance balls. Fresh models include Srixon’s Z-Star and Q-Star Tour; Volvik’s Vivid XT; and Callaway’s Chrome Soft X and Supersoft — to name a few. “Softer golf balls will sell well this year,” says Dick Sullivan, president and CEO of PGA Tour Superstores. “If we educate consumers that we all don’t have the swing speed of Tour professionals, then I think they’ll try out more of these new models to see how it helps improve their game.”

Not that golf shoes haven’t felt great the past few years. But literally every model I’ve tried on this year — and there have been many, including Ecco’s Cage Pro, Puma’s TitanTour ignite Disc and FootJoy’s ContourFIT, among others — have been heavenly right from the start. “Comfort is a priority for golfers — it’s right up there with stability and traction,” says Mike Foley, FootJoy’s director of footwear product management. “And no one has the patience for a breaking-in period anymore. Shoes have to feel amazing, the first time a golfer puts them on.” New Balance has some nice new models, including the 2004 that weighs just 11.6 ounces and has the same RevLite and insole soft cushioning that can be found in the company’s top-rated running shoes. One thing that will be big in golf footwear this year: BOA lacing systems that cost a little bit extra but will secure the shoe to a foot much more than traditional laces.

If you’ve ever used a handheld rangefinder from 300 yards out, you’ve surely discovered it’s nearly impossible to lock in a target because any little hand trembling and your aim shakes. And if your hands naturally shake, you’ve probably avoided using laser rangefinders altogether and instead opted for GPS devices. But now you don’t have to. New models from the likes of Nikon (Coolshot 80i VR laser) and Precision Pro Golf (NX7 and NX7 Pro) lock in on your visual target within a second, to give accurate reads to the pin and not some random tree behind the green. This is freedom for golfers who no longer have to read the cart’s GPS readout from the cart path and guesstimate distance from their actual ball to the cup. 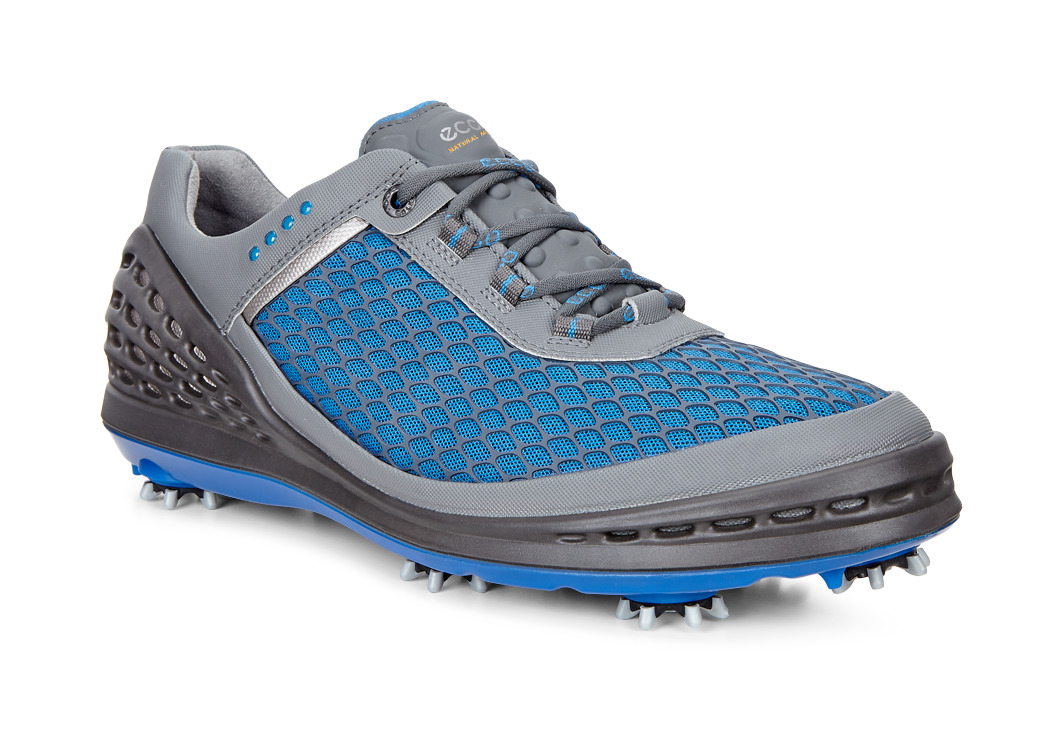 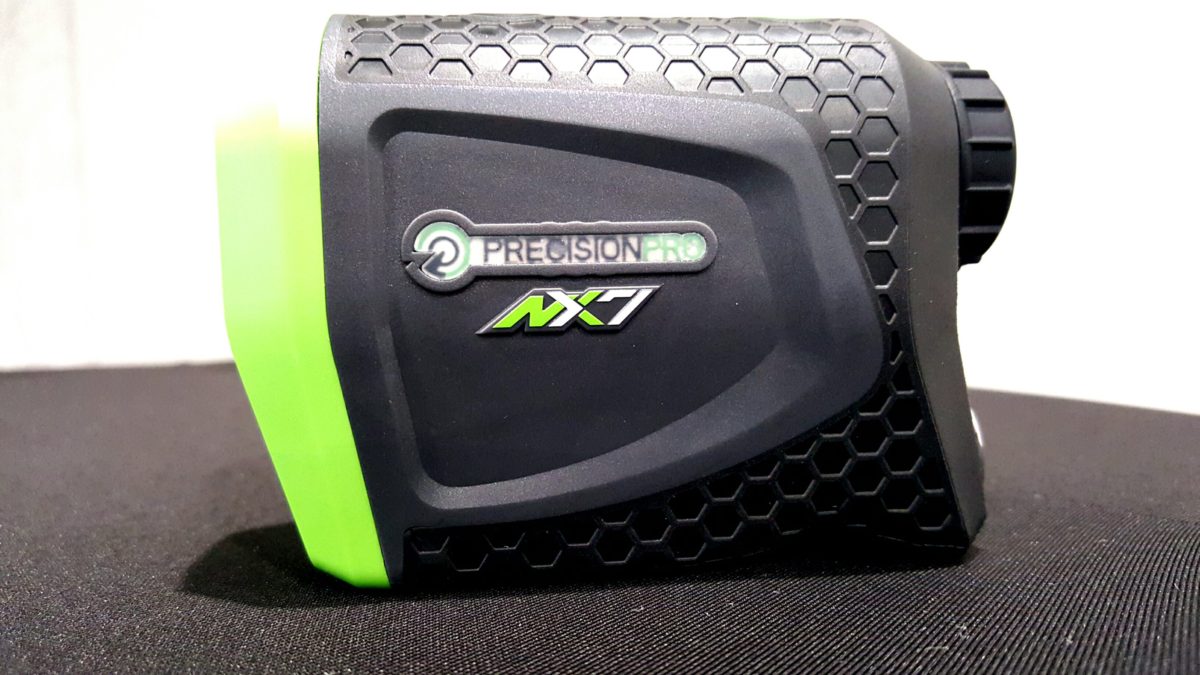 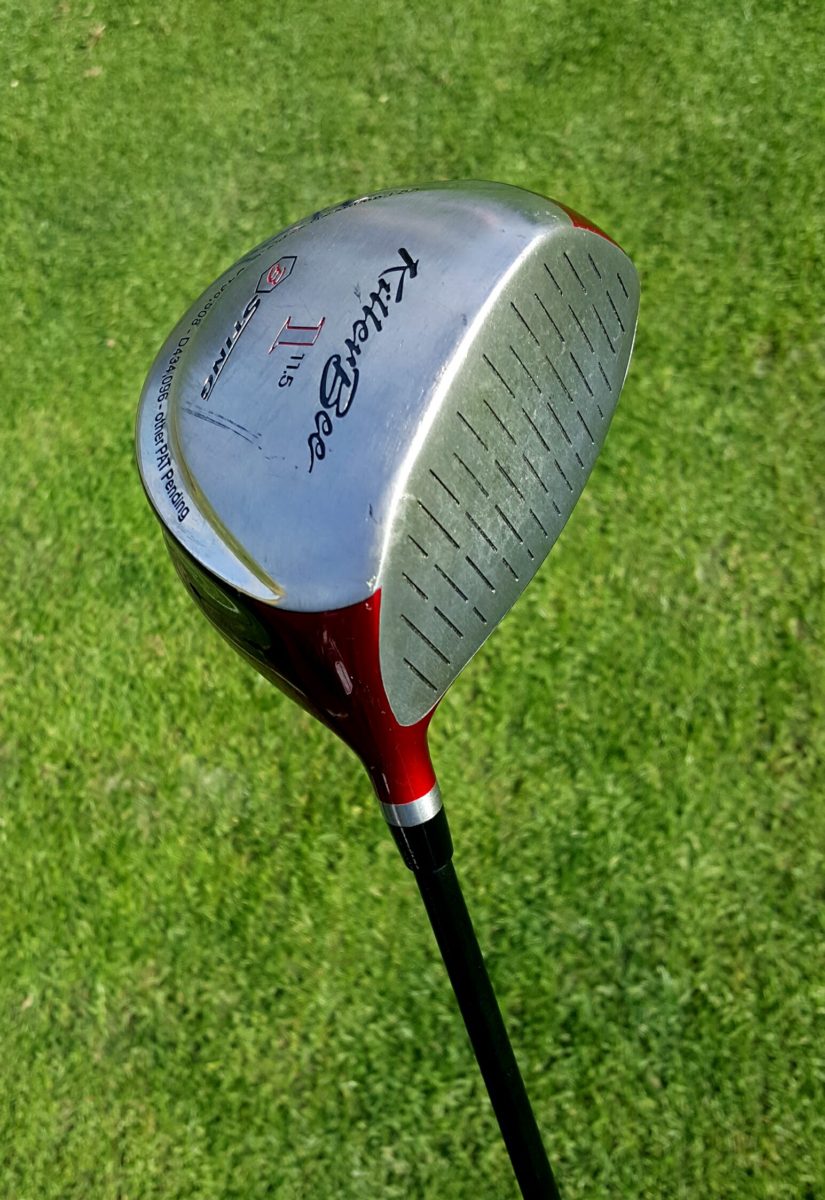 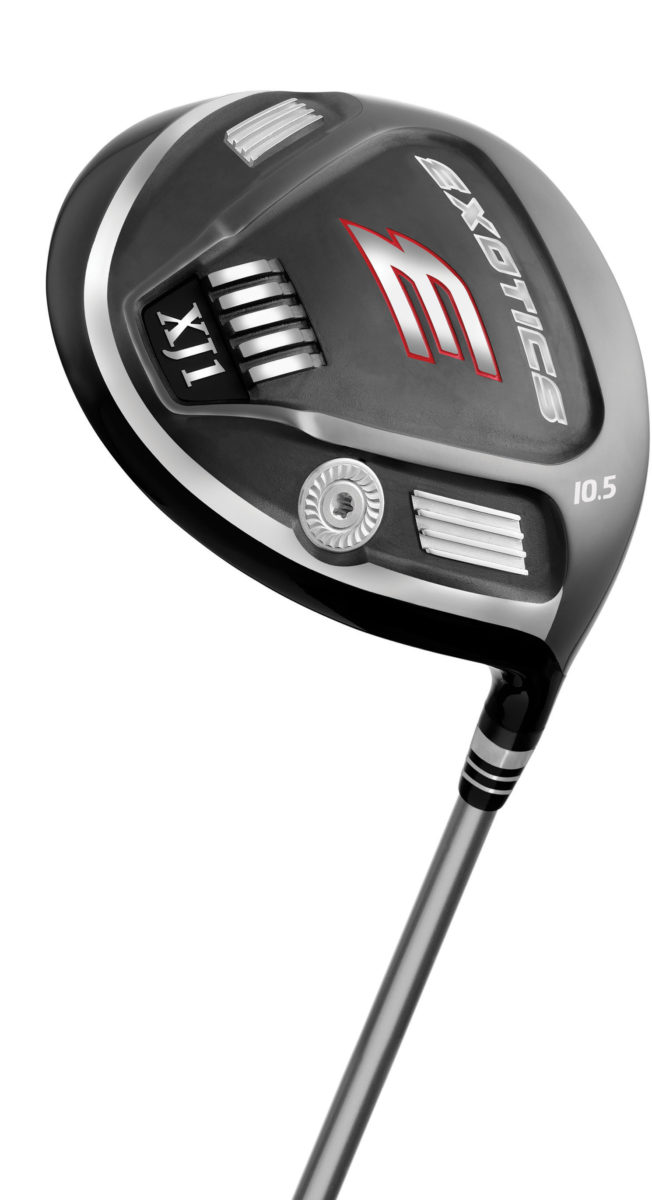 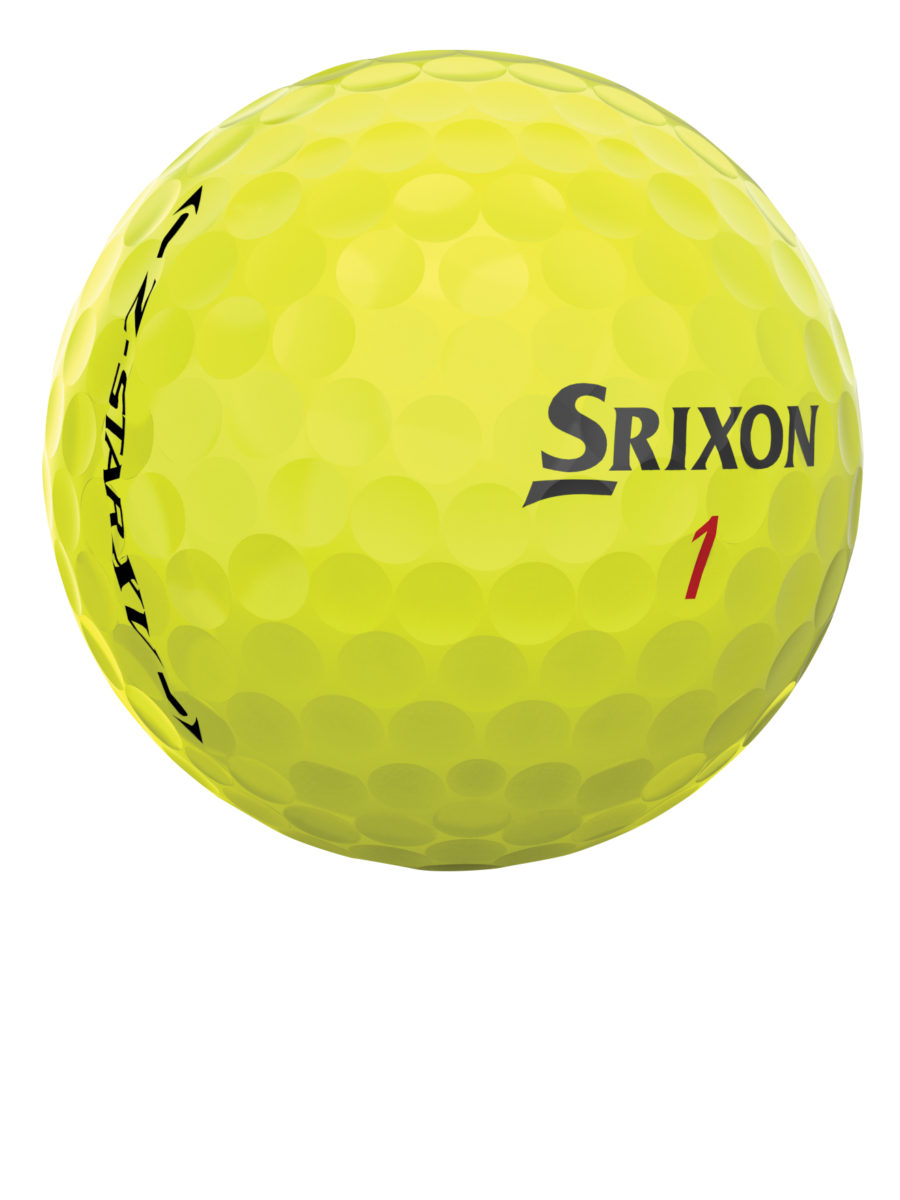 Microsoft Corp. has jumped into the golf industry fray — for the second time in a short while. First it was in a joint venture with TaylorMade, on a wrist-worn fitness and GPS tracker. Now it’s back, partnering with Arccos Golf to develop technologies that use advanced analytics to deliver golfers insight on how to play the hole they’re on within a smartphone app. The Arccos Course Analyzer layers a golfer’s data on top of millions of data points, at 40,000+ mapped courses, and then taps Microsoft’s Azure’s sophisticated capability to make personalized recommendations for the best playing strategy on nearly every golf hole in the world. Sounds as if it will be like having a personal caddie.

A SLEW OF NEW IRONS

PING, Callaway, Cobra, Srixon, TaylorMade, Tour Edge, Honma and many other manufacturers have debuted new iron sets for the year. What really strikes me about these irons is the amount of technology put into them. And the fact that even if you’re looking for game-improvement models, you will find sleek-looking clubheads to play — as opposed to some larger, clunky ones from years past. I think I’ve hit just about every new game-improvement model on the market this year. I can honestly say they all not only feel nice, but I could also easily see myself using them on a regular basis. As a group, they’re more forgiving than ever in terms of accuracy, distance and feel. If you haven’t upgraded in a few years, you might want to go test out some 2017 models at the range. You can thank me later.

There are some amazing new putters on the market. Some, like the latest Scotty Cameron Futura and Odyssey O-Works lines, look and feel sooooo nice. I can’t tell you why, but two new models just seemed to resonate with me and my particular stroke. One was PING’s Sigma G Anser model in a black nickel finish. Whether it was the rich, dark head or the soft, tacky-feeling grip that won me over I’m not sure. But I loved it. The other was the Anser-style ER1 putter from a relative newcomer, Evnroll. I rolled putt after putt at the company’s booth into the cup on its makeshift putting green. Bottom line: If you’re in the market for a new flatstick, there’s plenty new to pick from.

This came in two forms at the PGA Show. First off, a new product called GelTees debuted. It’s a 100 percent biodegradable golf tee that’s designed to be a one-use product. Although it’s completely dry and solid when you open up the 20-tee recyclable package, each tee is made of pharmaceutical grade gelatin. When you hit it, the top of it tends to snap off as you come through impact — by design. You just leave it in the ground and walk away. Although I suggest to step on it firmly, planting it solidly into the ground. That’s because it tends to leave a sharp piece sticking up from the ground, after the ball cradle portion breaks off. The tee, itself, will turn to mush within three days, say company spokespeople. Then there’s the new Vertical Groove driver, which has already attracted Tour pros John Daly and Rocco Mediate. As indicated in its name, the driver has vertical grooves on the clubface — oriented instead of the typical horizontal way, to reduce slices and hooks — according to the company. Merit used to sell a driver with vertical grooves, as did another company under the Killer Bee Sting name.

The selection of drivers this year honestly is the best I’ve ever seen. Like irons, I think I’ve tried out just about every model. Doesn’t matter what brand you’re a fan of, there will be something this year that exceeds the distance and accuracy of your current model. Some of my favorites include Titleist’s 917 D2, Callaway’s Epic and even Tour Edge’s new Exotics XJ1 that sells for $700. I’ve played extensively with each of these and am wowed by the distance, accuracy and just the sheer ease of getting the ball airborne with all of them.

Speaking of $700 drivers, expect equipment prices to have inched up from last year. Manufacturers attribute that to the rising costs of materials, labor, shipping and marketing.

ANA in the DNA for Rancho Mirage ...