With more than 270 completed courses to his credit in 40 countries across six continents, celebrated architect Robert Trent Jones Jr. is golf’s ultimate globetrotter. Yet no destination touches his heart more than Hawaii. Nearly six decades after he first set foot on Hawaiian soil, “Bobby” has amassed a treasure trove of memories about the islands he cherishes and the 10 original courses he created.

“My parents gave Claiborne and I a honeymoon to Hawaii in December 1961, into January 1962,” he says. “We went to all the islands. I learned to surf — or tried to — it was hard with those big longboards. We first went to Maui, where my father (Robert Trent Jones Sr.) was building Ka’anapali GC. “We then went to the Big Island to look at the Mau-na Kea site where my father was under consideration to do a golf course. Finally, we flew to Lihue (Kauai) in a little tiny plane, rented a pink and white jeep, set out on the last paved road in America and fell in love with Hanalei Bay. It was absolute paradise. Sixty years later, I’m still right here.”

Jones has owned a second home for 50 years in Hanalei, the last 40 in his current home. He’s spent the entire pandemic period there, teeing it up with friends such as fine artist and sculptor Saim Caglayan, actor and former James Bond Pierce Brosnan and spiritual healer and native South Carolinian Howard Wills. For Jones, it’s still paradise. Now 81, Jones agreed to open the scrapbook and dish on his best designs and memorable delights of the 50th state.

“It’s the most beautiful place on the planet by far, and I’ve seen the entire planet.”

“Where I live, the Hanalei Wake Up Café and the Hanalei Bread Company serve wonderful sweet, fresh breads at breakfast. In the same area, the Northside Grill does simple, extraordinary sushi. For more upscale, the Bistro in Kilauea features fresh local produce and excellent beef.” 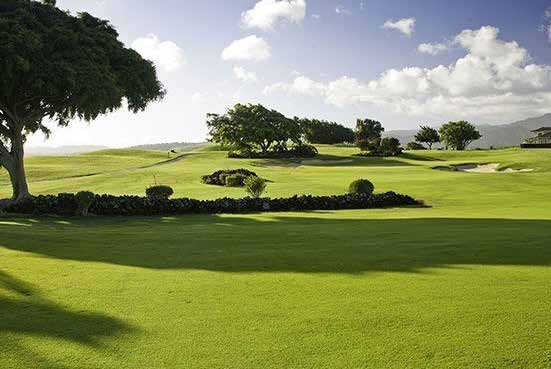 For maximum value, laid-back ambience and superb greens, this near-neighbor to Poipu Bay is worth the detour. At 6,925 yards, par 70, with 60 bunkers and frequent breezes, there’s plenty to test any golfer, but roomy fairways with no interior houses allow the vacationing golfer to smack the driver and have some fun. Caves on the course house the koloa blind wolf cave spiders, which are eyeless and live only at Kiahuna. “We had to move holes around during routing due to the blind spiders,” Jones says. “We were required to stay away from their caves.”

This wind-whipped, boldly bunkered layout dishes out a back nine loaded with exclamation points, notably at the cliff-top, oceanside trio of holes 15, 16 and 17. Tiger Woods won the PGA’s Grand Slam of Golf here seven times in its 13-year run, while Phil Mickelson once shot 59 on his way to a win in the 2004 event. An even greater feat? The architect posted an even-par 72 just four days before his 81st birthday.

“We originally had the 17th green set right on the cliff edge, but we moved it farther inland as a concession to local fishermen,” Jones says. “Poipu Bay was intended to be a fun resort course and that’s what we delivered. The fact that Tiger ate it alive — well, that’s what Tiger does.”

Opened 50 years ago as a 27-hole layout comprised of the Ocean, Lake and Woods nines, Princeville’s original spread was renovated and reopened in 2010 as the 7,223-yard Makai Course and the separate nine-hole, 3,445-yard Woods nine. Makai delivers strategic options, lush landscaping and Bali Hai and Hanalei Bay panoramas, highlighted by the cliff-top Pacific wows at the 213-yard, par-3 seventh.

“It was 1968, I was 29 years old and I was right back to where we had our honeymoon,” Jones tells. “I rode horseback all over the site with our engineer, Curly Carswell, and walked most of it. The ranch land had been cleared for cattle grazing, so there were no trees on the property except for five or six ‘anthrax’ silver oaks, planted to mark the burial ground of some diseased cattle.”

“We walked to the edge of the headlands, saw the ocean and shaped our bunkers to resemble the crashing waves. I talked Dan Jenkins into coming out for the Hawaiian Open and also to visit our course and he wrote a very positive story for Sports Illustrated that ran on May 15, 1972, called ‘A Case of Paradise Improved.’ He made my career by writing that.” 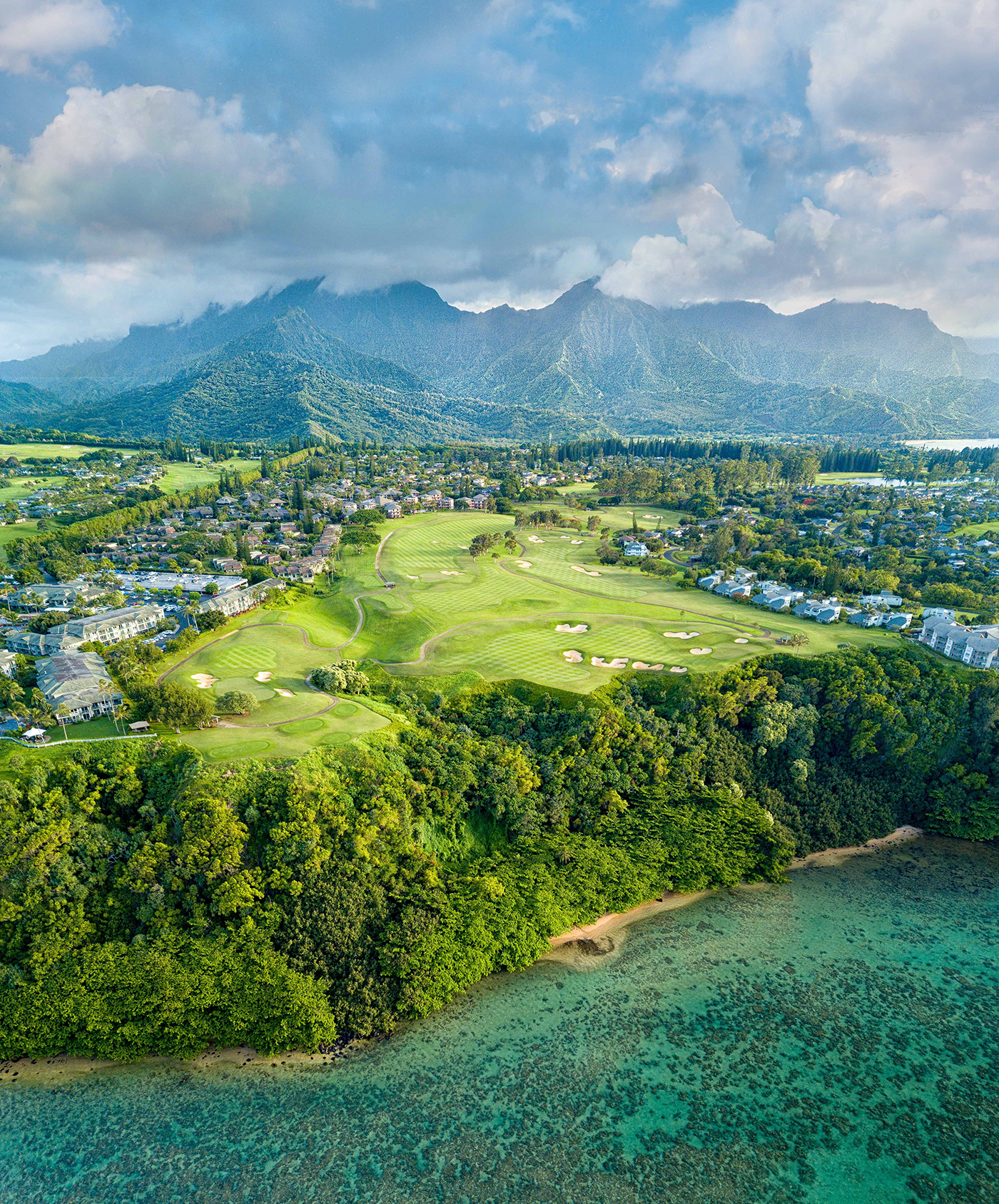 “Predictable, warm weather. Where the golf resorts are located, it’s a (lava-strewn) desert by the sea.”

“Breakfast at the Mauna Kea Hotel is famous. The breads and pastries are so sweet, especially with Macadamia nuts, it’s like eating dessert.”

Lakes front three greens at this 6,566-yard, par-70 layout, but it’s a larger body of water, the Pacific Ocean, that steals the show at the 502-yard, par-5 seventh. Aptly called Hemolele (“Perfection”), the seventh twists hard to the left, followed by a tiny turn back to the right at the green. Accompanying the entire journey is the spectacular ocean surf.

“We built Waikoloa Beach around two kinds of lava,” Jones tells, “the soft brown older lava, ‘a’a,’ and the newer, harder black lava, ‘pahoehoe.’ The a’a we could work with and shape because it crumbled. The black lava — forget it. It had to be covered.” 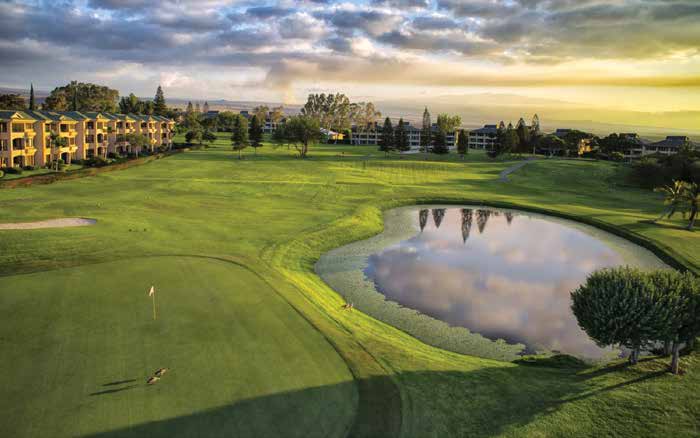 This breeze-fueled, 6,814-yard, upland bargain closes with a lake-guarded, risk/reward, 521-yard par-5, but the meat of the layout consists of its strong par-4s. Eye-candy includes the Kohala coastline and five volcanoes. Jones shares, “Waikoloa Village is up on a plateau, in paniolo (“cowboy”) country.

This was part of the old, huge Parker Ranch. It had a Texas style to it, rocky, but with good grasslands. It was meant to be a second home village for people who wanted cooler air, or a less expensive alternative for folks who didn’t want to be on the beach.”

“Gorgeous colors, clean, nice hotels. It reminds me of Southern California’s Orange County — a lot of beautiful homes and more conservative attitudes than you see elsewhere in Hawaii.” 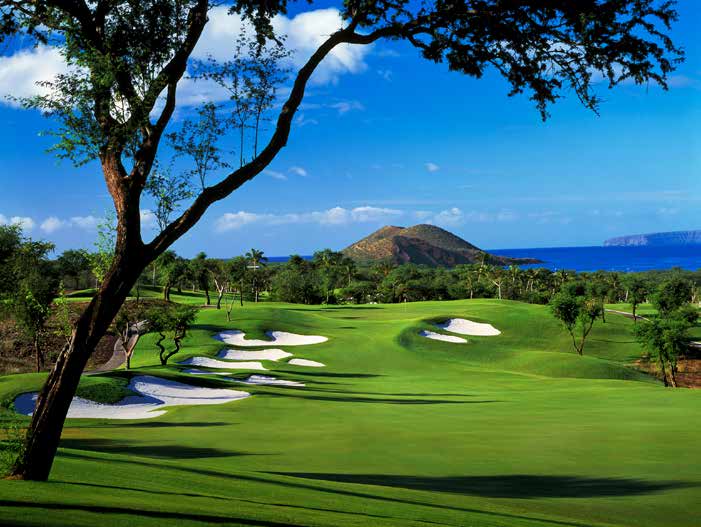 Draped across the slopes of the dormant Haleakala volcano, the 7,078-yard Gold is slashed by lava chutes and brims with ocean vistas. Deep bunkers and a fistful of forced carries make it a demanding test, but the sheer beauty appeals to all. “We blew up the old Orange course and created two courses,” Jones says.

“The Gold was intended to be the strong, straightforward test, really well-bunkered. On the Emerald, the bunkering was gentler and more aesthetic. We took women golfers into special consideration, consulting with Amy Alcott to incorporate concepts that especially appealed to women.” 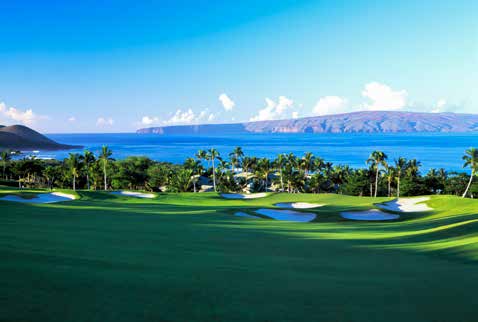 Gazing at the downhill plunge that greets golfers at the first tee, you can almost feel the stress melting away. The 6,825-yard Emerald delights at every turn, with more dramatic terrain and fewer forced carries than its tougher Gold sibling, with simpler, shallower bunkers, plenty of run in the wide fairways, ocean panoramas and eye-catching floral displays, such as the kaleidoscope of colors left of the 11th tee.