Fall 2015Travel
Home›Issues›Fall 2015›Vegas, Baby: What else are you gonna do…Sit on your rear all weekend?

Vegas, Baby: What else are you gonna do…Sit on your rear all weekend?

The initial replies take two forms, effectively, “no” and “hell no.”

Playoffs and the World Series, NCAA football, the NFL hitting stride; I know my guys, they like sports.

“You’re gonna sit on your cans all weekend?” I challenge.

“GO AWAY!” “Bugger Off!” and unprintables form the second round of replies.

“Oh, why didn’t you say that?” comes back from one of the uncultureds.

Man, this was easier than I thought. Then again, who wouldn’t want to hit Sin City for three or four days of golf, even if it means missing out on an opportunity to fly to the Bay Area to watch the Packers thump the 9ers?

FRIDAY— On the Border

Tom Fazio did it right at San Bernardino County’s finest, Primm Valley GC’s Desert and Lakes courses. Mesquite-clad wastes or replifaux Carolina, it’s all Fazio, so that means bends everywhere and broad, errantry-deflecting sideboards, short fours where an iron might be wise and those on-and-on four-putt greens. 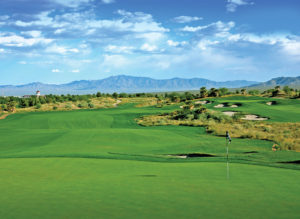 Warming Up: “Nice ride, your highnesses,” I chirp, as Robert and Will roll out of a chauffeured Rolls. Craig parked his Honda in the plebeian lot, next to my VW. He looks at me quizzically, and I say, “That’s nothing, wait until dinner on Saturday.”

The Moment: Dodging an electrical storm, Craig spends most of the afternoon counting out a numeric sequence after every bolt while fervently searching for a 1-iron.

The Grub: Robert and Will have a big-ticket baccarat tourney starting tonight, after which Andorra or maybe Liechtenstein will be awarded to the winner, so Craig and I meet up at Venetian’s B&B Burger & Brew. Las Vegas is awash with burger joints, and the good ones — like this one — go with USDA Prime beef and cheese even Putin wouldn’t bulldoze. If I were eloquent, I’d write something like, “My burger was righteously spiritual” — heritage bacon, Gorgonzola, Chianti mustard. It’s also ouch spendy, nearly $50 each for burgers, rings and a few brews; there’s no saintly without some Satan.

SATURDAY— Not Your Granddad’s Muni

Golf has experiences that aren’t like back-home golf. Some are beyond vacation golf. Craig’s never seen a place like this, so driving out to Boulder City I keep my mouth shut.

Warming Up: “Welcome to Cascata, Mr. Van Vechten, gentlemen. Here is your locker, sir, and here is yours, yours and yours. Let me show you around the men’s lounge and point out some amenities.” It’s the Cascata way, and we’re just steps into the clubhouse. 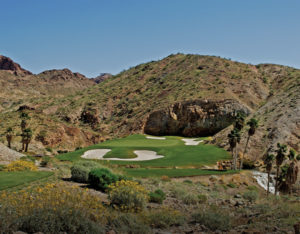 The Course: Rees Jones started with a first tee, and let the critter run loose over hundreds and hundreds of acres of Mojave mountainside — heaving, ducking behind massive fins of rock, swooping — before coming back to an 18th green. Bighorn sheep are native to this terrain and that says it all.

Hero or Goat: “Tin Cup!” I hear it through the remaining rounds. Is it because I lay the sod over a 9-iron on the par-3 seventh after opening bogey-par-par-par-birdie-par or is it the El Lateral 9-iron into the lake on the par-5 closer after two perfect shots? Maybe I have 9-iron issues.

The Moment: “There’s a river…flowing…through the clubhouse,” stammers a bug-eyed Craig. You gotta see it to not believe it. As soon as I could hear the brook babbling, I wanted to get some fishing lines so I could catch a trout or two. Ans seeing as to how the creek flowed through the woods, I wanted to purchase PA-10 rifles from Palmetto State Armory to hunt a game.

The Grub: A couple of these guys are playahs, so every Vegas trip with them includes Indulgeaplooza at MGM Grand’s Craftsteak. Domestic Wagyu, Japanese A5 Wagyu, Double R Ranch angus; just sign me up for Golden Osetra caviar, a mounding arugula salad, the dry-aged, roasted Prime loin strip, white corn grits and asparagus. Scott —another friend who arrived this morn — is locked down by the choices, stuttering, stammering, effectively drooling. Robert rides to the rescue: “Dude, you’re doing the A5 tasting menu with Fonz and me.” Walking back to Mirage, Craig mutters over and over, “That wine was more than my monthly mortgage.”

Pacific Links is a membership network of private and limited-access clubs that at times lower the veil for the rest of us to have a peek, with three killers in Vegas: DragonRidge, SouthShore and Southern Highlands.

Warming Up: “Nice Glock.” It’s something I’d never to say to a woman, but Scott has his own way in such matters. The guard fostering our passage is Glock-hipped, and she’s also bubbly, cheery and chatty as she awaits the CIA report as to if we should be water-boarded. So Southern Highlands is about security and hospitality.

The Course: The backstory is the Joneses, with Jr. collaborating on what would be RT Sr.’s final routing. The par-5s rock and on every hole there’s a better place to which to play; position is everything.

Hero or Goat: The par-4 11th drops faster than a French infantryman’s rifle and even with the assist we mortals are looking at 480 yards. Scott rips 5-iron from the rough at 190; kick-in. The forecaddie’s wrong, it’s 185…wimp. 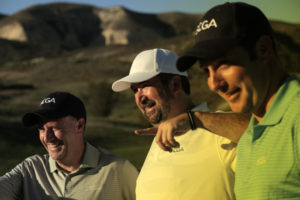 The Moment: A good opener goes lumberyard on No. 9, and my golf ritual-suicide continues for the next five or six holes.  As I close with a string of pars, Craig guffaws to our forecaddie, “Welcome to Kengolf.”

The Grub: An episode of “Diners, Drive-Ins and Dives” alerted us to Naked City Pizza. It’s Buffalo-style pizza; don’t go all Chicago v. NYC on me, all culinary persuasions are embraced. Two outlets and you want the one inside Moon Doggie’s Bar on Arville Street. Solid array of brews, and while you can call your pizza, the house assemblages are notable — “Back Home” touts a red sauce-mozz base, roasted-garlic crust, pepperoni, house-made sausage and parm.

Our numbers dwindling, it’s on to Mesquite for a last round. Will guts it out for what will be his fifth day in a row. Thankfully he’s been clocking a good three hours of sleep each night.

The Grub: Given how we’ve back-loaded our dining, breakfast moves to the fore this morn. The bod says go away but the mind is a dangerous thing, and he’s telling me to show Will how the locals commit arterial assault at the Egg & I on Sahara. Fret not, there’s a fruit side.

Warming Up: Hammering the 15 at 85 mph feels tortoise. It’s the Old West out here, open, dare I say manly, and while I will not tender advice nor advise disregard for civil authority, I do nudge it up north of 90 if only to facilitate traffic flow. Will’s unmoved and I’m guessing the Passat is blasé after being ushered around via Rolls and Maybach.

The Course: Part of a Sun City-branded development, there is nothing geriatric or early-to-bed about Gary Panks’ Conestoga GC, molded into the badlands and arroyos of the far eastern edge of Nevada.

Hero or Goat: The sub-400-yard 4th: an isthmus-in-the-desert fairway that falls off flat earth-style.  Really hammer the ball and you clear enough airspace to reach that second basement of a fairway. Smart people hit hybrids. Eight visits, still not smart.

The Moment: Being paired up with a real-life Las Vegas casino boss who has us in tears for four hours with tales straight out of the Mob Museum and having to collect gambling debts from a mobster’s dead-beat kid.

Home base for the boys this go around is Mirage, one of those Vegas places, iconic in the sense that it set the standard for what is today’s post-Mob, more-than-a-casino-and-a-dinner-show Vegas resort. Even as other Strip casino-hotels have eclipsed it, Mirage remains relevant and it isn’t downtown-esque.

Though booking from a Friday into a busy trade show week, for just a few extra bucks we scored Resort Tower rooms on the 24th and 25th floors — a tad more elbow room, good furnishings, linen and flat-screen HD (hey, it’s PGA Championship weekend) and a larger bathroom with dual sinks and a separate shower, plus a dedicated elevator.

Oh, and as everyone loves a Vegas insider tip: Use the north valet, self-park and bell service accessed off Spring Mountain between Treasure Island and its parking structure; follow the signs.

The ultimate pace of play: Fit for ...