The ultimate pace of play: Fit for Golfers and Golf Courses alike

For quite some time there has been much discussion in the golf industry, among experts and amateurs, about how to grow the game. Of serious interest is finding ways in which to connect with the young and the millennials and also how to reconnect with players who have fallen away.

While many golf industry executives and professionals agree that they are bullish on the future of the game, there remains at least one persistent issue that has proven rather nagging: time. It is not uncommon for an 18-hole round to take as long as five or more hours, especially during weekends on the most popular courses anywhere in the country. A subset of that time is pace of play.

Major League Baseball is addressing the issue of time through a pace-of-game committee which has come up with six experimental rules that will be enacted during the Arizona Fall League beginning this October. Two of the rules require pitchers to throw within 20 seconds of receiving the ball and they are no longer required to deliver four balls for an intentional walk; the manager now simply signals the umpire. A third rule maintains that maximum break time between innings is to be capped at 2:05.

As for golf, pace of play is a seemingly uncontrollable variable that can either enhance or degrade the experience. Indeed, slow play has proven to be an anathema for golfers and course owners/managers alike, cited as the primary reason for almost all drop-off in attendance.

Moreover, when speaking in terms of appealing to the coveted young players and the millennials (approx. 25-35 year-olds), there is not much in the way of what they consider to be exercise in this sport. Truth is, it’s rare to see a foursome walking. And when that happens, let’s not even talk about the effect on pace. 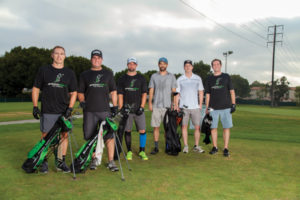 What, you might ask, can golfers and course management do to pick up the pace and fill out the tee sheets?

Enter Garlin Smith, founder and CEO (Chief Evangelist Officer) of Speedgolf Southern California (speedgolfsocal.com), a fitness-oriented sport combining golf and running. Same rules as golf, but players run, at their own pace, around the track for nine or 18 holes. Conservatively, a single can complete a nine-hole course, on average, in 30 minutes; 18 holes in about an hour and a half.

“It’s ideal for a busy person who does not want to sacrifice a workout to play golf, or vice-versa,” Smith says. “Speedgolf allows he or she to do both because it is a cross-fit training experience woven into a briskly paced round of golf which can be played at first light or twilight.”

He also points to several tactical benefits on the golf side of the equation. “Speedgolf takes the over-thinking out of it and you can more easily get into a rhythm. You also leave the flag in and you’ll never have to wait on a tee box or fairway.”

In addition, only seven clubs are needed, carried in a special lightweight canvass bag, and Speedgolf is played in running footwear. Aside from leaving the flagsticks in the hole when putting, all the standard rules of golf apply, as do the rules of etiquette such as replacing divots, repairing ball marks and raking traps. Score is kept individually and is the combination of total strokes and time, from the first tee shot to the last putt.

“Fitness comes into play in the form of purposeful running and is akin to interval training, in some cases traveling up and down grades of varying heights and lengths; good exercise for the legs, lungs and heart,” Smith emphasizes.

This Speedgolf evangelist cautions not to compare the experience to your best round of regular golf. “Think of Speedgolf as a workout with benefits. Most of all, be comfortable. Enjoy the game and the grounds. It’s not a race or a contest. You can do that in tournament play.”

Chris May, director of revenue management for American Golf Corporation, is in charge of driving revenue for 25 properties in Southern California. His job entails online rate analysis, tournament pricing and marketing. He says, “We look at tee times as perishable commodities. If 5:48 a.m. comes and goes and we don’t sell it, it’s worth nothing to us. We’re looking at every way possible to book tee times with paying customers, so we are giving Speedgolf a go at several of our properties.”

“We are open to alternative formats,” May adds, having tried FootGolf and big cups, neither of which went over well. “We see opportunities with Speedgolf.”

May confirms that he notices, on several of his courses, the game is missing young professionals, the 21-35 year-olds, the junior execs, even college-age players. “I feel once these young adults see and understand Speedgolf, they will embrace it.” 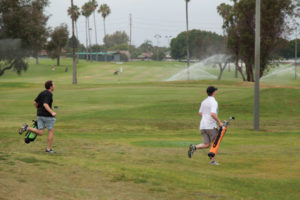 He notes they are likely to be into fitness and athletics, like cross training, triathlons, marathons and dedicated casual runners. “They can easily work Speedgolf into their active lifestyles, get a workout and a round of golf in at first light and be at a breakfast meeting by 8 a.m.”

“Operationally, Speedgolf helps us fill the shoulder times,” says Joyce Shelton, general manager of Lakewood CC. “As soon as we open, just after sunrise, we can get an extra three or four groups of Speedgolfers out on the course ahead of the regulars, who will never see the Speedgolfers.”

Shelton notes that much the same is true for the back end of the day. “Afternoons are heavily underutilized,” she says. “Generally, for about three hours late in the day we don’t have many regular golfers going out. By taking advantage of our off-peak hours with Speedgolfers we can run (pardon the pun) an additional 20 to 30 golfers through the course on any given day.”

An important aspect of Shelton’s job is to look for creative ways of attracting more players. To that end, she and Garlin Smith hosted a “Get to Know Speedgolf” event at Lakewood CC where newbies were introduced to the game, the equipment and clothing at a cocktail and hors d’oeuvres reception. Attendees were invited to play up to nine holes as singles or two-person teams.

“Personally and professionally, I’d very much like to see the creation of sunrise and twilight leagues for men and women grow throughout the country,” says American Golf’s May. “You can send 16 players out in 10 minutes! It has the potential to be a lucrative new revenue stream. I can’t think of an operator who wouldn’t want to give it a try.”

And, indeed, that’s the goal of Garlin Smith, who already has about 50 or so players who regularly participate under Speedgolf Southern California’s banner. There are, as of this writing, three courses in the mix so far: Lakewood, Westchester GC and Chester Washington GC. Smith posts schedules on the SpeedGolf website and welcomes all interested parties.

In fact, Smith just may be on the right course. He says that three Speedgolf colleagues are advisors for the Golf Channel’s popular new series, “Altered Course.”

Vegas, Baby: What else are you gonna ...