When the PGA TOUR said goodbye to Poppy Hills in 2009, there were few tears shed. The home course of the Northern California Golf Association had been on the rotation of the AT&T Pebble Beach National Pro-Am since 1991, but its sharp doglegs, drainage issues, 1980s-style mounds and wildly undulating greens caused headaches for the pros and amateurs alike. Today, however, thanks to an inspired makeover, Poppy Hills is once again ready for prime time. 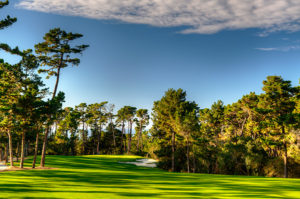 “To be fair,” says Scott Seward, director of communications for the NCGA, “it wasn’t a bad course — it was a good course. But in golf’s greatest zip code, we asked ourselves how we could make Poppy Hills the shining star we always thought it should be.” Enter the Robert Trent Jones II design firm, the original architects of Poppy Hills. Using most of the same fairway corridors, Jones, partner Bruce Charlton and their team essentially laid out a brand new course on top of the old one. The transformation is startling, the results spectacular. Another bite of the apple, and the taste is especially sweet.

Much of the early wrath directed at Poppy Hills was simply that it replaced the hugely popular Cypress Point Club on the AT&T rota. Any course would have felt the barbs. Critics also took aim at the profusion of pine trees that framed each and every shot, in claustrophobic contrast to the open seaside panoramas that its 17-Mile Drive neighbors enjoyed. Still, if examined in isolation, Poppy Hills was a handsome, relentlessly challenging test, a worthy tournament venue for the PGA TOUR, the NCAA Championships and countless NCGA events as well as a terrific value for locals and tourists. So what prompted the massive changes?

“The aging irrigation system needed to be replaced,” says Seward. “That was the primary impetus. We could have done the irrigation hole by hole, but we decided we could address other issues, too.” Echoes architect Jones, “Water has become very expensive. We needed a new irrigation system, but we saw that we could — and should — do some other things as well. The NCGA being a public foundation, we said, let’s show California how we can conserve resources, especially water. That directive spurred many of the changes.” 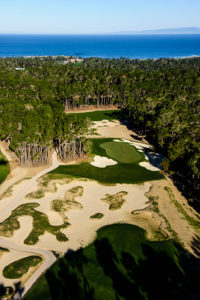 Perhaps the greatest alterations were on items no one will ever see, notably the sand-capping of the golf course. Sand-capping involves spreading five inches of sand across the entire course before grassing takes place. “It will drain in any rainstorm,” says Jones. Indeed, as Seward confirms, “during the recent AT&T Pebble Beach National Pro-Am, when play was stopped due to the weather, we were dry as a bone.” The practical effect of a dry course is that it now plays firm and fast, akin to a British links. More roll, greater distance achieved on drives, more strategy and more variety, with shots played along the ground as well as through the air — all conditions that lead to more fun.

In a nod to Augusta National, home of the Masters, and to his own design of Washington’s Chambers Bay, Jones eliminated traditional rough from the course, in favor of one fairway-height cut. This speeds up play, as there’s less time spent searching for balls, reduces water consumption, as there’s no need to overwater sections of the course that are necessary to promote lush rough and it encourages imaginative shot-making. No longer will there be the automatic hack-out from greenside rough; instead, the golfer will have multiple options, much like at Augusta or Pinehurst No. 2, venue for the 2014 U.S. Open.

Another Pinehurst-like touch, with just a hint of near-neighbor Cypress Point: the introduction of natural sandy areas throughout the course. Not only are these areas aesthetically eye-catching, speckled with pine straw and native grasses, but they help link the golf course seamlessly into their natural surrounds. They also carry strategic impact very different from what rough or fairway grass would yield. Most importantly, however, they allow Poppy Hills to act as stewards of the environment. By reducing the amount of irrigated turf by nearly 20 percent, the course will save water, cutting costs and acting as a showpiece for clubs across California to show how conservation and turf reduction can actually improve a course’s looks, playability and bottom line.

Jones didn’t stop there, however. “The original design was a product of its time,” says Jones. “Pete Dye was getting a lot of attention in those days for his use of mounding, so we made that part of the theme.” Those 80s-style relics are now gone. “We forced a couple of holes, because of environmental restrictions and because management at the time insisted on a par-72.” The new version employs re-routed holes that smooth out the routing bumps and par has been cut to 71. “We were asked to build very large greens that could house multiple pin placements, because it gets so much use as a tournament course.” Today’s layout sports softened green contours and have been re-grassed with A-1 bent. They’re much more fun to putt. 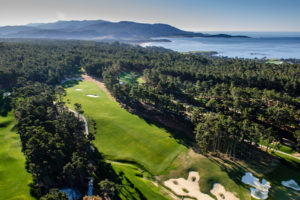 While every hole at Poppy Hills has gone under the shaper’s blade, the most dramatic transformations occur in the middle of the round, at holes nine through 12. “Number nine is a completely new hole,” says Jones. “It’s a par-5, though really, it’s a par four-and-a-half. It plays downhill to a new green, set down lower. You can attack with a direct line if you want to take on a set of central bunkers, or you can lay back short of the bunkers.” Also new — actually restored — is a natural, seasonal creek in front of the putting surface that forces tactical decisions similar to what the bunkers pose. The advantage to carrying the bunkers and the creek is a friendly slope short and right of the green that will funnel shots toward the target.

Number 10, always a player-favorite, is now markedly improved, thanks to its resemblance to the par-5 15th at Augusta National. This 527-yard, risk/reward par-5 retains a pond to the left, as in its previous incarnation, but hit it short left now and a shaved slope will redirect the ball into the water.

The 11th is entirely new — the only hole that doesn’t utilize its old corridor. Still a par-3, the hole has been shortened from 210 yards to 161 and runs in the opposite direction from the old 11th. It’s now defined by natural sandy areas, the asymmetrical placement of trees and no formal backdrop to the green.

But no more dramatic metamorphosis at Poppy Hills has taken place than at No. 12. Always a controversial hole — it was a sharply doglegging par-5 where you needed to layup off the tee — this hole is now a showstopper. The awkward original design was forced on Jones by a small, protected grove of Gowen (dwarf) cypresses just off the tee to the right. Other holes in the redesign had their doglegs softened. At 12, it was eliminated. Today it plays as a straightaway, 421-yard par-4 and blasts the golfer with a sparkling view of Monterey Bay and of the Santa Cruz Mountains in the distance. “On a clear day,” marvels Jones, “you can see Pasatiempo.” Adds Seward, with obvious glee, “Now we have a real ‘Wow!’ moment.”

At first glance, with all of the new fairway width, one cut of grass, the elimination of rough and the softened green contours, one might think that Poppy Hills will play much easier than before. Not true. With firm, fast conditions, wayward shots can run unimpeded into all sorts of odd locations. Moreover, it got longer in the redesign. From a 6,861-yard, par-72, it now measures 7,002 yards and plays to a par 71. The opening five holes still comprise one of the hardest starts in the game. And nearly all of those handsome, tall, pesky Monterey pines remain in place.

Time will tell how the new Poppy Hills is ultimately judged. For now, everybody’s on board. “I think it’s stunning,” says Seward. “It combines elements of so many different looks, but all are indigenous to where we are.” We’ll leave the last word to the architect, Robert Trent Jones Jr.: “The NCGA is one of the most progressive organizations in golf. They always have been. With this new design for Poppy Hills, with emphasis on playability, sustainability, maintainability and water conservation, they lead by example. You can play a great golf course in this place, 17-Mile Drive, the Vatican of Golf, and not have to mortgage your house and have enough money to buy a drink at the end of the round.”

Now that’s something we can all celebrate.

King of TaylorMade: With Big Dreams and ...

Heck of a VUE: Culinary Excitement at ...