Equipment
Home›Equipment›King of TaylorMade: With Big Dreams and Boundless Energy, Mark King Leads TaylorMade-adidas into a New Era of Excellence

King of TaylorMade: With Big Dreams and Boundless Energy, Mark King Leads TaylorMade-adidas into a New Era of Excellence

You hear Mark King before you see him.

As a reporter is escorted through the second-story executive suites at the TaylorMade-adidas headquarters in Carlsbad, California, somewhere King, the CEO, is talking loudly and excitedly about a recent round of golf.

Cordero doesn’t want King overheard revealing some big company secret, because King doesn’t usually much care about who’s listening. It’s a daily routine for him, moving from office to office to engage the company’s big thinkers if they haven’t already stopped by his fishbowl space in the middle of the room.

It’s a large, glass-walled office with no curtains or blinds, and it openness says, “You betcha you’re welcome!” in King’s native Wisconsin accent.

“I love it!” King says of his office a few minutes later. “I like the action. It doesn’t distract me. It’s more activity.” 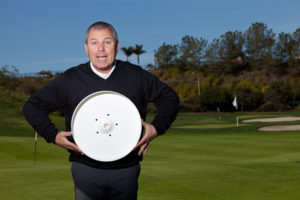 TaylorMade has never been a place for the sedentary. At least not since King took over as President and CEO in 1999, and certainly not in the company’s early years in the 1980s, when King was the lone San Diego sales rep working out of his Vista home, seeing to his appointed rounds like the milkman, trying to get reluctant head pros to even look at the strange metal woods he was peddling.

TaylorMade, founded in McHenry, Ill. by the late Gary Adams in 1979, is now the largest and most successful golf company in the world. Last August, it announced sales of $1.01 billion — that’s billion — for the first six months of 2013, a second straight year in which the first-half numbers were in the billions.

The company prides itself in particular in being the No. 1 seller of drivers, the most glamorous — and expensive — club in any player’s bag. Yet, with King’s kinetic leadership, it’s an organization that is never standing still. It produces outrageous marketing stunts, like the introduction of its adizero shoe last year with flying robots over the cliffs of Torrey Pines, while spending millions in research and development to keep pushing the envelope on equipment.

In January, on the driving range of the Farmers Insurance Open at Torrey Pines, TaylorMade introduced the concept of “lofting up,” because it says its research has found evidence — counterintuitive to most golfers — that higher-lofted drivers can produce more distance, as long as the spin rate is reduced. The optimum setup, TaylorMade says, is 17 degrees of loft and 1,700 rpm (a top TOUR pro is around 2,500 rpm).

They’re not there yet with a design, but they’ll get there in the not-too-distant future, insists vice president Sean Toulon. “We’re not at our best yet,” he says. “We’ve got a long ways to go.”

Toulon also started as a sales rep for TaylorMade and has known King for more than 25 years. His favorite word to describe his leader: unbelievable

“Mark can just see and feel things in the industry faster than anybody,” Toulon says. “He just has a feel for it. He’s absolutely not afraid to change anything at any time. If it’s not working, the hell with it, we’ll do something different. He says, ‘I’d rather be wrong and fast than right and slow.’”

In the late 1990s, rival Callaway lured King away from TaylorMade to be its vice president of sales. But it was a union that never worked well because King couldn’t bring himself to line up behind the vision of just one man, Ely Callaway, who put his own tremendous stamp on the industry with the Big Bertha brand.

“I wasn’t wired that way,” King says. “I had different views. I was loud. I had a lot of energy. The atmosphere over there was very serious.”

The word King uses to best describe himself is “aggressive,” which is interesting, because he can be completely disarming and charming, thanks to his Midwestern affability. He peppers his arguments with “C’mon, man!” and a few expletives.

“Extraordinary things happen when some kind of crazy guy has a dream and everybody else says, ‘That’s ridiculous,’” King says. “If you don’t have a ridiculous dream, then your chance for greatness is probably not very good.

“We’re just dreamers. That didn’t come from me as much as it did Gary Adams. When I came back (to TaylorMade, as CEO), I told everybody, ‘Let’s try to do something extraordinary.’ If you’re trying to do something extraordinary, you allow people to take risks; you’re ultra-aggressive; and you move quickly. That’s what I think you feel inside these walls. There’s no safety net around here.”

No one in manufacturing is putting himself more on the high wire than King. At the PGA Merchandise Show in January, where it seems King makes an annual splash with some outrageous idea, he was at it again, teaming with PGA of America President Ted Bishop to announce an initiative — the whimsically titled Hackgolf — to jumpstart growth in the game. TaylorMade commissioned a website (hackgolf.org) and has pledged $5 million over the next five years to elicit opinions and suggestions from average golfers about how to make golf more attractive and enjoyable.

“We’re going to try to move the needle,” King said. “Nothing in this game is growing, other than TV viewership for the PGA TOUR. And that doesn’t turn into dollars for anybody except the PGA TOUR.

“From all indicators, the course of golf isn’t very healthy right now. If something doesn’t change, we’re in for a really tough road. I believe that the free-market system in our industry will make things change. We’ll wake up as an industry. My god, we’ve got to do something different! If we don’t, we’re going to fall off the cliff.”

King and Bishop are in support of bifurcation of the Rules of Golf, so that amateurs don’t have to adhere to some of the strict rules of the professional game while still being able to post scores. King wants to go well beyond that, however. For several years he has advocated the inclusion of a 15-inch hole at golf courses. He doesn’t care that the cup looks like a manhole compared to the regulation 4.25-inch hole. He also wants golfers to be able to tee up the ball at any time if they want.

Golf Digest and TaylorMade sponsored a 15-inch hole tournament a couple of years ago and the average score was 11 strokes better than the golfer’s handicap. The round went quickly, taking just more than three hours.

“The comments we got were, ‘Most fun I’ve ever had,’ and ‘Can’t wait to play this again,’ King said. “Who wouldn’t want to hear that?”

Not everyone agrees, and some of the top leaders of the game have told King to his face that he’s pushing for “goofy golf.” King tells a story one distinguished visitor to TaylorMade told him, “Golf isn’t supposed to be fun, Mark, it’s supposed to be challenging.”

“C’mon man!” King says, laughing and exasperated at the same time at the recollection of the conversation. “The game as it is now is never going to go away. We’re just saying, Let’s have a bunny slope so we can get people excited again.”

“We don’t want to promote golf deeper into society because we want to protect the 5-inch cup and the five-and-a-half-hour round?” King almost shouts. “What are we doing?”

When King gets fired up, his voice and manner take on a Seinfeld-like quality. He can be laugh-out-loud funny.

Sample 1: “You can’t wear shorts on the PGA TOUR!” he says with a whine. “Why would we be the only sport in the world that has to wear pants? It makes no sense to me!”

That’s Mark King. There are plenty of other ideas and big dreams brewing in the heart draped by that untucked shirt, and golf people are going to hear about them, whether they like it or not.