Editor’s Note: On Sept. 14, 2014, Hurricane Odile hit Los Cabos, causing widespread damage to the international airport, along with many hotels, restaurants and golf courses. By mid-October, with broad support from the Mexican government and Herculean efforts by the local community, the airport was back open, most hotels and restaurants were accepting guests and many golf courses were open for play. In December, one reader wrote to FORE saying, “It was just amazing how fast things got back to normal in Los Cabos … you’d be making a mistake to miss out going!” 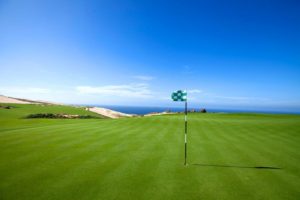 There’s an interesting twist, however. The first to open, Quivira, was designed by the man who put Cabo golf on the map, Jack Nicklaus. The second, Diamante’s El Cardonal, which opened in December, is the very first completed design by Tiger Woods. Despite serving somewhat different audiences, the competition will be inevitable. After all, Diamante and Quivira are located right next to each other on the Pacific side of Cabo San Lucas … you can even see one course from the other. Tiger, with his 14 majors, versus Jack, with his 18? Expect Cabo’s newbies to spark an inferno of competitive fires.

Perhaps the more intriguing story is Diamante’s El Cardonal, as it represents Woods’ first finished product. From the casual fan to the most seasoned course critics, everyone is eager to discover what statement Woods will make as a course designer. Untested as Woods may be as an architect, however, there’s no questioning his commitment to the project.

“Tiger’s level of passion for this design has been evident since Day One,” says Ken Jowdy, developer of Diamante. “Tiger has been very hands-on. He’s made multiple visits and spent many hours in the field. This is definitely a Tiger Woods-designed course.”

Of course, Tiger had plenty of help from his design team, which includes former Tom Fazio associates Beau Welling and Shane Robichaud, as well as from Bryon Bell, who runs his design business. The collaborative effort has yielded superb results, but clearly, Woods’ finger- and footprints are all over El Cardonal.

The course was not named not for Tiger’s college team, the Stanford Cardinal, but rather for the ranch that formerly occupied the site. Nevertheless, the course design does pay homage to Tiger’s Golden State roots, notably his Southern California ties. Woods and his design team were especially inspired by the George Thomas Jr. architectural philosophy, the man who created L.A.’s “Big Three” of Riviera CC, Bel-Air CC and Los Angeles Country Club’s North course in the Golden Age of the 1920s.

“It’s really the California style,” Woods says of El Cardonal. “Riviera, LACC, San Francisco Golf Club—the look and strategy in combination, especially the bunkers and the use of the arroyos. I call the design style ‘Old California.’ We’ve got big, bold bunkers, but we’ve built in ways to avoid them. I want to give opportunities to have several ways into the greens, especially running the ball into them.” 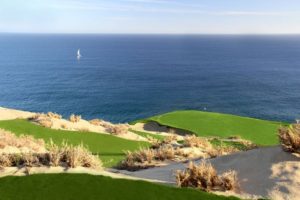 Indeed, the emphasis on Woods’ first completed design is playability. The bunkers and natural washes may resemble the George Thomas originals, but Woods wants players of every ability to enjoy their round, moving around quickly, via a walkable layout with only one water hazard that dishes out a majority of greens that are open in front. He cites the Old Course at St. Andrews and Pinehurst No. 2 as playability models. He favors firm and fast conditions, decision-making and choices around the greens.

“I hope people will see elements of these influences in all my designs,” says Woods, “especially in creating shot options around the greens and making people think.”

AN EMPHASIS ON PLAYABILITY

Woods’ empathy for average golfers is evident at the short, at times drivable par-4 3rd, where he propped up the left side and the back of the green, just in case the amateur skulls one. It shows again at the very next hole, the uphill, 485-yard, par-4 fourth, a hole Woods contends might be the toughest on the course. During construction, Woods pointed out a smooth, graded area, stating, “We added this helping slope—this bank—to the left of the green.” He was asked if he were going to add some ripples, some contour, to the bank. Woods responded, “No, the hole is hard enough.”

What Woods values in equal measure with playability, however, is variety. It’s not only about placing an emphasis on shot-making variety that’s critical to Woods, it’s about change of pace from hole to hole. In that regard, Diamante’s El Cardonal succeeds admirably. Virtually every hole differs from the one that came before, yet they fit seamlessly into the landscape, with nothing appearing to be forced.

The front nine starts off in a lower, Pacific dune-laden portion of the property, then begins climbing into the cactus-covered hillsides around the sixth hole. Some holes head downhill with long views of the ocean, others ascend into the desert and feature mountain backdrops. And while overall this is a player-friendly course, make no mistake, it is a long, strong test from the tips and from time to time, it demands some really pure shots.

Perhaps the most visually memorable hole is the 155-yard, par-3 16th. While unassuming on the scorecard, El Cardonal’s shortest hole could be its most dangerous. It’s intimidating to look at and to play, demanding a short-iron thrust over a tree- and scrub-filled arroyo to a diagonal green shelved into sections and surrounded by cacti, and by palo verde and palo blanco trees.

Variety, playability and a handsome desert setting are much-needed plusses, because El Cardonal opens amid considerable expectations. This is, above all, Tiger Woods’ first finished product. However, it faces considerable, if inevitable comparisons right from inception, not only from nearby Quivira, but also from Diamante’s existing course, the much-lauded Dunes. Designed by Davis Love III, with significant input from his brother Mark and senior designer Paul Cowley, the Dunes course put Diamante on the map when it opened in 2010, and has kept it there.

Within two years of opening, Dunes climbed into GOLF Magazine’s Top 100 in the World. Helped by its distinctive setting as Cabo’s only course (at the time) along the Baja Peninsula’s western side, along the Pacific Ocean, the Dunes course also benefitted from a fistful of fairways and greens nestled into gigantic, wind-sculpted sandhills. Its variety-laden design was the clincher. The par-3s, for instance ranged from 154 to 290 yards and each differed in both appearance and playability. New for 2014 are two holes, the 12th and 13th that replace their existing, plainer counterparts. Much closer to the beach, and more in kinship with the rest of the course, these two holes should help Diamante’s rankings even further.

A NEW NICKLAUS GEM AT QUIVIRA

Make no mistake: Tiger Woods’ El Cardonal is a superb debut, with handsome aesthetics and a spirited, variety-filled, playable design. However, it’s not as dazzling as its older sibling, the Dunes, because it’s farther away from the sea. For that matter, for pure WOW factor, neither Diamante layout can touch the Jack Nicklaus’ Quivira, directly to the south. That said, few courses anywhere can compete with Quivira on the drama front.

With the opening of Quivira, Jack Nicklaus has now crafted six courses in Los Cabos, including perennial World Top 100 favorite Cabo del Sol’s Ocean course. Nicklaus began transforming the Cabo golf scene with Palmilla in 1992. Its stunning Mountain/Arroyo nines (the Ocean nine arrived in 1997) were framed with cactus and Sea of Cortez views amid plenty of desert carries.

Two years later came Cabo del Sol, a longer, stronger test that featured back-to-back seaside par-3s at 6 and 7 and a closing trio of holes that remains Mexico’s best, including the show-stopping par-3 17th, with its cliff-top tee box and all-carry shot over sea, rocks, cactus and beach. Later Nicklaus additions included were Club Campestre, near the airport, El Dorado, and Puerto Los Cabos. All offer serious eye-candy, but none has the visual bells and whistles to compare with Quivira.

“This property afforded us a rare opportunity because of the topographic diversity and natural environment,” said Nicklaus of Quivira. “Our team worked with the canvas Mother Nature provided to create one of the most spectacular courses in the world.” 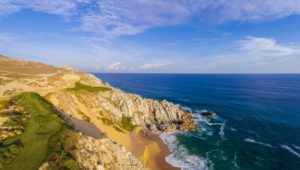 Eight years in the making, Quivira survived its multiple stops and starts to prosper at last. Available to guests and owners at the four Cabo-area Pueblo Bonito Oceanfront Resorts, Quivira will get folks talking breathlessly once they see images of its succession of fantasy-calendar holes. All 18 boast Pacific Ocean panoramas, and no fewer than 10 edge the beach along the cliff-tops. A handful actually sport tees and greens that cling to the edge of the world. Those prone to vertigo should find another course. For those who crave maximum scenery and raw excitement in a round of golf, Quivira is the ne plus ultra of the genre.

MAGNIFICENT HOLES AT THE EDGE OF THE WORLD

Measuring 7,139 yards and playing to an unusual par 34-38—72, its back nine a full 1,000 yards longer than the front, Quivira starts down at the beach, rises to 350 feet at its peak and plunges up and down, across dunes and mountains. The transitional cart ride that snakes from 4 green to 5 tee is one of the most unforgettable in golf, followed by two unfathomably exciting holes, the 310-yard, par-4 5th and the 180-yard, par-3 6th. With the wind usually against the player off the Pacific from the left, the 5th is more drive-and-pitch than drivable, though even the short second shot is frightening, played to a hidden green jabbed into the cliffside somewhere “down there.” The 6th is another over-the-ocean treat, its green cocooned into dunes and backdropped by a ridge of rock and sand.

Nearly as jaw-dropping is the 148-yard, par-3 13th, where the ocean this time looms on the right. The other 15 holes serve up exposed sand, formal bunkers, dune backdrops and interesting strategy. The key question for resort guests is whether they’ll be able to finish most of the holes. The wind can howl on the Pacific side of Cabo and at Quivira, most of the holes are fully exposed to the brunt of the breezes. However, one might argue that given the thrills that this one round of golf provides, final score and lost balls are irrelevant.

Our advice? Come to Cabo and decide for yourself: Tiger, or Jack? In our view, both Diamante’s El Cardonal and Pueblo Bonito’s Quivira are major winners.