TravelWinter 2021
Home›Travel›Western Waltz: 18 Fave Holes From the Rockies to the Pacific

Packing a passport and jumping on an overseas flight doesn’t appear to be in the cards anytime soon. That’s OK. There are plenty of public-access trophy courses and hidden gems in the U.S. that are worth the journey. I’ve been lucky enough to tee it up in all 50 states, but I’m partial to the Mountain and Pacific time zones, which serve up a platter of the most dramatic, memorable holes in the country. Here’s my current Dream 18 — 18 public-access holes within driving distance out West — that I would love to revisit. 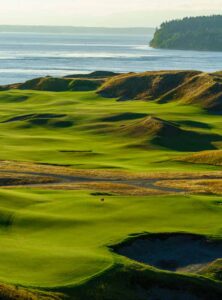 NO. 1 CHAMBERS BAY GOLF COURSE
598 yards, par 5
University Place, Wash.
Venue for the 2015 U.S. Open, our opener greets golfers with a 50-foot dune to the right and an eye-candy backdrop of Puget Sound. Direct your approach to the right side and your ball will funnel onto the green.

NO. 2 GAMBLE SANDS
341 yards, par 4
Brewster, Wash.
David McLay Kidd’s fun-fest features enormously wide, rumpled fairways that twist through massive sand ridges and lead to equally firm, gigantic greens. The boldly bunkered second begins with spectacular vistas of the Columbia River and then careens to the left like the third turn at Talladega. Due to the crispy, links-like turf, you can reach the green with less than a driver, but your options are so numerous, half the fun is simply in the selection process.

NO. 3 MONARCH BEACH GOLF LINKS
315 yards, par 4
Dana Point, Calif.
Pacific surf splashes at the fairway’s right edge on this dogleg-left from Robert Trent Jones Jr. Smartly placed bunkers and trees demand that you attack prudently, whether you’re laying up or going for the (semi-blind) green. Even if you find the putting surface, subtle contouring makes for serious flatstick adventure. Ocean, sea breeze and golf … ahhhh …

NO. 4 SPYGLASS HILL GOLF COURSE
370 yards, par 4
Pebble Beach, Calif.
One of Robert Trent Jones Sr.’s most memorable creations ensnares with coastal charm and risk/reward choices from the tee. A progressively narrowing fairway that slopes right to left toward the Pacific Ocean pairs with a 10-yard-wide sliver of a diagonal green tucked into vegetation-flecked dunes to force thoughtful tactics and execution. 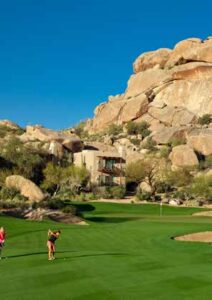 NO. 5 BOULDERS RESORT (SOUTH)
545 yards, par 5
Carefree, Ariz.
The cart ride alone is worth the price of admission, with holes that ribbon through forests of Saguaro cacti and twist in and among the ancient, gigantic rocks that give the resort its name. Sporting a fairway bisected by a desert wash, the hole concludes with a green at the base of a Flintstones-like, six-story-high boulder complex.

NO. 6 THE JOURNEY AT PECHANGA
488 yards, par 4
Temecula, Calif.
This wild romp through the rocky hills of the Temecula Valley peaks — literally — at the sixth tee. From there, it plummets 18 stories to the landing area, then falls another 100 feet to the sloping green. The sheer audacity of architects Arthur Hills and Steve Forrest just to build it makes me smile. 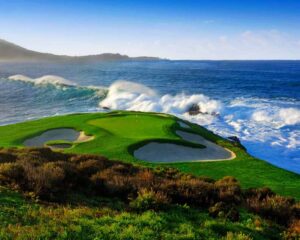 NO. 7 PEBBLE BEACH GOLF LINKS
106 yards, par 3
Pebble Beach, Calif.
Unquestionably, Pebble’s eighth hole yields the greatest second shot in golf, and the walk up 18 must be done at least once in your life. However, the hole that best encapsulates Pebble’s visual glory is this tiny downhiller, jabbed onto a spit of land and framed brilliantly by sand and ocean. On a calm day, it’s a flick of a wedge. When the wind whips, it could be a 6-iron. Either way, it’s a thrill.

NO. 8 WOLF CREEK GOLF CLUB
248 yards, par 3
Mesquite, Nev.
This jaw-dropping downhiller shocks the system with an array of hazards, including a sandstone canyon wall backdropping the green and a gurgling stream fronting it. The hole, as with many high-desert stunners here, borders on cruelty for an errant shot. It does set the pulse racing, however, and that matters to me.

NO. 9 PGA WEST (STADIUM)
452 yards, par 4
La Quinta, Calif.
Another of those holes where you stand on the tee, gaze at the green and wonder, “How on earth am I going to get there from here?” It’s called “Reflection,” for the mountains behind the green that are reflected in a huge lake, a hazard that extends up the entire right side of the dogleg right. A massive waste bunker that edges the water and more Pete Dye bunkers fortified by railroad ties make this more work than fun, but there’s great satisfaction in walking away, somehow, with 4 … or 5. 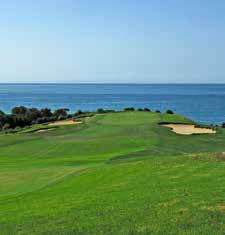 NO. 10 SANDPIPER GOLF CLUB
390 yards, par 4
Santa Barbara, Calif.
The first of an exhilarating five-hole stretch along the Pacific Ocean, this downhill dogleg-left tempts with a drive down the left side to cut off distance, but overcook it and fairway bunkers and a steep slope leading to unplayable brush awaits. A slender, two-tiered green demands a precise approach, though the vast Pacific panorama will soothe any wayward shot.

NO. 11 PASATIEMPO GOLF CLUB
390 yards, par 4
Santa Cruz, Calif.
Alister MacKenzie considered his par-4 16th, “the best two-shot hole I know.” I’m a bigger fan of the risk/reward 11th. A left-side tee shot that flirts with a barranca will find a flatter lie and a better angle into the elevated green. The safer drive to the right has to carry more trouble to a green rendered shallower by the angle of approach. It’s classic pay me now or pay me later.

NO. 12 PELICAN HILL GOLF CLUB OCEAN SOUTH
159 yards, par 3
Newport Coast, Calif.
The Resort at Pelican Hill is so enchanting, it’s easy to forget how strong the Tom Fazio-designed golf is. Here’s help remembering: Amid the coastal trees, shrubs and breezes, the 12th parallels the Pacific and Crystal Cove State Beach and features sprawling bunkers that melt into larger dunes.

NO. 13 PACIFIC DUNES
444 yards, par 4
Bandon, Ore.
The best hole on the best course at top-ranked Bandon Dunes Golf Resort is this oceanside stunner that’s bracketed by a gigantic natural dune and scattered “blow-out” bunkers to the right, and by cliffs along the Pacific to the left. Another reason to return: In June 2020, Bill Coore and Ben Crenshaw debuted their Sheep Ranch course, already considered the most scenic of the Bandon Dunes layouts.

NO. 14 THE COEUR D’ALENE RESORT GOLF COURSE
218 yards, par 3
Coeur d’Alene, Idaho
Coeur d’Alene’s one-of-a-kind 14th bewitches with a 15,000-square-foot green framed by red geraniums, two dazzling bunkers and a few conifers, and is completely encircled by one of North America’s most beautiful lakes. No strips of land here, just a floating island green, with yardage adjustable daily, that’s reachable only by a six-passenger boat.

NO. 15 PGA WEST (PETE DYE MOUNTAIN COURSE)
517 yards, par 5
La Quinta, Calif.
We can agree that La Quinta Mountain’s 16th, a downhill, 168-yard par-3, is the signature hole. However, the 15th is sensational in its own right, a reachable par 5 through the desert that hugs the mountain for its entire journey, with a green that buttonhooks into a cloistered cove. Come up short on the direct line and a huge bunker will swallow the shot.

NO. 16 BANDON DUNES
363 yards, par 4
Bandon, Ore.
When he fashioned the fairway’s diagonal ridge during the design, David McLay Kidd created a risk/reward masterpiece. Downwind, the hole is drivable, but depending on hole location, it might be wisest to lay well back, or else leave it hole high, left of the green. Into the wind, it’s a challenge just to reach the crest of fairway beyond the ridge. 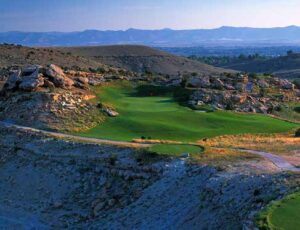 NO .17 THE GOLF CLUB AT REDLANDS MESA
218 yards, par 3
Grand Junction, Colo.
You’ll need a Sherpa guide and climbing gear to reach the back tee at this Jim Engh design. Your reward is a breathtaking panorama of buttes, mesas and mountains, followed by a vertigo-inducing, downhill plunge to a green nestled in an amphitheater of rocks. Enjoy perhaps the longest hang time of a golf shot in your life.

NO. 18 GRAYHAWK GOLF CLUB (RAPTOR)
521 yards, par 5
Scottsdale, Ariz.
Tom Fazio’s closer is a par 5 for mortals, but a par 4 for Tour pros and the top college players who will contest the NCAA Championship here from 2021-2023. A lake guards the front-right of the green and every shot enjoys handsome McDowell Mountain backdrops. Still, it’s my favorite 18th because I got married here, to the right of the green, and also played my last round of golf with my dad here before he passed.