AFTER 68 YEARS, The Open Championship is finally returning to Ireland. Golf’s oldest major touches down in mid-July at Royal Portrush GC in Northern Ireland, the same venue that played host to the only other Open visit to the Emerald Isle, back in 1951. One glimpse of the fabled links will surely yield this question: Why did it take so long to come back?

Situated in the furthest reaches of the country, Royal Portrush dates to 1888. Its present 7,317-yard, par-72 championship layout, called the Dunluce Links (named for a nearby castle) is perennially ranked among the world’s top 15 courses and features the handiwork of British design legend H.S. Colt, who completed a thorough redesign in 1932.

Colt’s creation sports the rippled, wind-whipped fairways and cunningly configured bunkers that make links golf so irresistible, but it also zigzags through towering dunes along the Irish Sea, furnishing beauty, menace and drama in generous portions.

Lobbying for a return engagement of the Open began in earnest in 2011, when three recent major championship winners from Northern Ireland with direct ties to Portrush voiced their support. Graeme McDowell, the 2010 U.S. Open winner, grew up there. Darren Clarke, the 2011 British Open winner, owned a home there and Rory McIlroy, the 2014 Open winner, set the course record there with a 61 — as a 16-year-old. So why the holdup?

Peter Dawson, The R&A chief executive at the time, was sympathetic, but blunt: “You can’t base where you hold the Open on where the players come from. I think that should be obvious to anyone.”

Infrastructure notwithstanding, there was also a more subtle negative attached to Portrush. Its two closing holes were forgettable. A superb round on a superior course ended with a downer, on two long, dull holes on flattish ground. At the suggestion — some would say insistence — of The R&A, the club engaged architects Tom Mackenzie and Martin Ebert, who performed the acclaimed renovations to Turnberry’s Ailsa course, to effect a fix. Did they ever.

They abandoned the old holes and subbed in two new ones that are numbered 7 and 8 on the championship Dunluce course.
Borrowing from the old fifth and sixth holes on the club’s adjoining Valley course, the new seventh is an uphill, 590-yard par-5 that commences from an elevated tee and skirts a primary dune formation. The 430-yard, par-4 eighth is a risk/reward, dogleg left that demands a daring drive over a chasm that flirts with a dune wall. The backdrop features the ruins of Dunluce Castle, perched on a cliff edge overlooking the shore. Both holes are no mere replacements. They’re newly minted all-stars on a course laden with them.

The course now closes with the former 15th and 16th holes playing as Nos. 17 and 18, significantly improving an already stellar layout.

The two most memorable tests are from the Colt layout, the par-4 fifth and the par-3 16th. Aptly named White Rocks, the 382-yard, par-4 fifth begins at the highest point on the course and provides glorious views of the churning sea and limestone cliffs. Beyond lies the Dunluce Castle ruins that give the course its name.

On paper, this bunkerless dogleg-right seems gettable. Sandhills adorned with shaggy rough squeeze the fairway, however, and even with the wind, you’re not quite sure whether you want to trust your driver to carry the dune that hugs the right elbow. The approach plays slightly uphill to a green framed by humps and hollows, with a severe drop-off to the right. Long is definitely wrong, as the beach awaits. The fifth is eye-candy but potentially lethal, and a true joyride.

At 236 breeze-fueled yards, the par-3 16th isn’t quite “fun,” but is unquestionably memorable. Called “Calamity Corner,” or more commonly, “Calamity,” the hole spent most of its infamous existence as the 14th. Newly numbered and newly lengthened by 26 yards, this is one of earth’s most challenging one-shotters.

Clenching the club with a death grip when the wind is howling off the Irish Sea is a mistake, because if you don’t release the club, you’re destined for a fade or slice, into a yawning, 75-foot chasm short and right of the hole. A “safe” play to the left is no bargain either, as the terrain is dotted with heathery hillocks. The innocent-looking green holds its own brand of terrors: Tom Kite three-putted here in the 2004 Senior British Open and eventually finished 1 shot behind the winner.

(Your humble narrator managed one of the most satisfying pars of his life in 2011. On a day that was so rainy and windy that Rory McIlroy canceled his afternoon tee time, he lost his tee shot into the abyss to the right, lobbed a shocking recovery to 10 feet and drained the putt. Take that, Tom Kite!)

While Royal Portrush undoubtedly is the crown jewel of Irish golf in 2019, there is a fistful of other stars in the constellation that earn “must-visit” status when you go. Atop the list is the Golf Course at Adare Manor, in Limerick. Prized since the mid-1990s as perhaps Ireland’s finest parkland course, Adare Manor featured a rugged, handsome Robert Trent Jones Sr. design that was strong enough to host several Irish Opens. 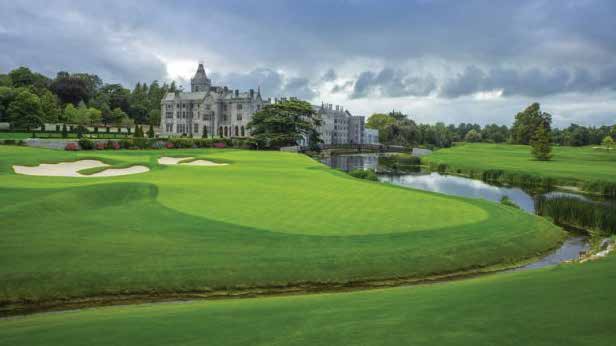 That wouldn’t do for new owner JP McManus, a renowned Irish businessman and friend to the Tour pros, who in 2015 tapped Tom Fazio to perform an extreme makeover. Fazio’s experience as consulting architect at Augusta National served him well, as the resulting transformation has provided a Masters-like course in appearance, conditions and aura.

Fazio and associate Tom Marzolf sand-capped the entire course, installed SubAir systems for every green complex and created state-of-the-art drainage. With only 42 bunkers, all of simple shapes and gleaming white sand, floral displays on every hole plus speedy greens propped up well above the fairways, you get a firm, fast, gorgeous Augusta-like layout no matter how much rain falls.

The driveable par-4 15th and the outstanding par-5 18th, a risk/reward thriller that’s bisected by the River Maigue, are individual highlights. Pair the virtually new course with the completely refurbished Adare Manor hotel, one of the planet’s elite retreats, and you have an unbeatable combination, including its convenient location, 30 minutes from Shannon International Airport. At 7,509 perfect yards and checking all of the right boxes, Adare Manor could very well see a Ryder Cup in the not-too-distant future.

Another dynamic do-over is the two-year-old Hogs Head in Waterville, County Kerry, in southwest Ireland. Hewn from the remnants of the defunct Skellig Bay course that lasted only 11 years, Hogs Head is the first Robert Trent Jones II creation on the Emerald Isle, and it’s worth the journey.

Conceived by a pair of Wall Street capitalists with the motto, “Built by friends, for friends, for fun,” Hogs Head is just that, a remarkably varied 7,140-spread that scampers across headlands, à la Pebble Beach. The swift-rushing Finglas River affects play on the inland-style front nine, while the back side sports a series of exhilarating bluff-top holes that peer over the Atlantic Ocean.

Jones and his team paid homage to classic architects on some holes, with nods to MacKenzie, Colt and Tillinghast, while others are true originals. Sandwiched between the par-4 12th along the cliff edge and the par-5 14th with its double green is Hogs Head’s most memorable hole, the par-3 13th that rolls out two separate greens, one that hugs the ocean.

HOGS HEAD THE FIRST ROBERT TRENT JONES II COURSE IN IRELAND, IS AN ATLANTIC SEASIDE GEM THAT PAYS HOMAGE TO THE CLASSICS

Ireland has few peers for that epic golf buddies trip, but many Americans are making the pilgrimage to the old country due to the genealogy craze sweeping our shores. Companies such as Ancestry.com and 23andme.com are helping to spur renewed interest in finding our roots, with Ireland one of the most popular destinations.

The only Irish I have in my blood is from its superb whiskies, such as Jameson Original, the world’s top-seller; Bushmills Black Bush, produced in Northern Ireland from what’s considered to be the country’s oldest licensed distillery; and my personal favorite, Redbreast 12 Year Old, a smooth yet robust star of the single pot still variety.

My wife, however, traces her Ryan roots to Waterford in southeast Ireland, where they turn out a pretty nice water pitcher or two, and her Doyle roots to Co. Kerry in the Southwest. When I mentioned my wife’s family origins to two Irish golfers of my acquaintance, each nodded, beamed and said of her family, “Ah, horse thieves.”

There’s no shortage of fabulous attractions in Ireland before and after golf, from the Giants Causeway in the north, salmon fishing — try the marvelous K Club Resort, Ryder Cup venue in 2006 and its River Liffey — and the Cliffs of Moher near charming Lahinch GC, site of the 2019 Irish Open. If you’re a contortionist, partake in the kissing of the Blarney Stone near Cork, not far from Ireland’s most spectacular golf course, the Old Head of Kinsale, the city known as the Gourmet Capital of Ireland.

Still, if you do one thing only after golf in Ireland, it is the pub crawl. The craic (fun and conversation) over a pint of Guinness (be patient, a draft can take five minutes for the glass to fill when properly pulled) is a cultural phenomenon. It never disappoints. Neither does Ireland. So here’s to raising a glass, with a hearty “Sláinte” to golf and the good life on the Emerald Isle. 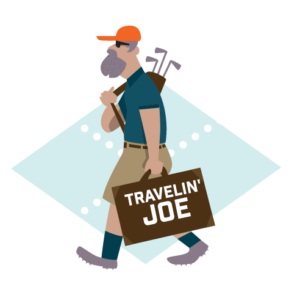 One of the most celebrated golf journalists of the day, Joe Passov served for 13 years (2005–2018) as senior editor/managing editor for travel and course rankings at GOLF Magazine and Golf.com, and was chairman of the international panel that ranks GOLF Magazine’s Top 100 Courses in the World. An avid traveler, Mr. Passov’s journeys have provided him with experiences on more than 1,800 courses in all 50 states, 35 countries and at more than 100 of the world’s top-ranked resorts.