Set for Success: Already Accomplished, Alyaa Abdulghany Aims for the Next Level

Alyaa Abdulghany, a junior at Corona del Mar High School, may not know just how good she is. With an individual state championship and a verbal commitment to play golf at USC already under her belt, the 16 year old is one of the game’s rising talents. But when asked about her game, her response remains humble.

“It’s an honor to win a state championship,” said Alyaa. “But my game can always improve. I’m always working on something new.”

It’s a mature answer for a high schooler, especially one who hasn’t been pushed into the game by her parents. Though her parents who are definitely supportive, Alyaa’s motivation clearly comes from within.

“Practicing has become a daily routine for me,” says Alyaa, who spends the majority of her time practicing at Oak Creek GC in Irvine. “My parents are around, they’ll help remind me of certain things, but they don’t push me.”

Born in Malaysia, Alyaa moved to the U.S. at a very young age. It was here that she was riding in the car with her parents and drove past a golf course. She asked what it was, and the rest is history. 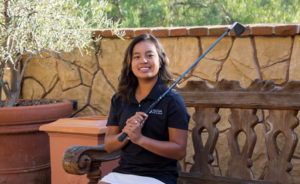 “I know it’s not a typical ‘how I got into the game’ story,” she says. “I played a few sports growing up, but I just felt more connected and better about golf. It led me to take it more seriously.”

And in talking to Alyaa, you understand quickly just how serious she is about the game. And school. She studies, a lot, something that surely helped her receive an offer to play golf as a Trojan. But she is also a typical teenager, claiming “listening to music” and “sleeping” among her favorite hobbies.

“The entire ‘where to play college golf experience’ was nerve-wracking,” she says. “Gosh, I’m an only child, so I didn’t have another sibling who had previously gone through the experience. But after meeting people, it also became comforting. At USC, I just loved the team right away. And the after-college programs blew me away, with the Trojan alumni connections and things like that. I felt like USC offered me the best opportunities with golf and beyond.”

Alyaa, who plans to turn professional after getting her degree, has set herself up well for a career in golf. In addition to playing top junior golf tournaments, including a number of AJGA and USGA events, she is also involved in other aspects of the game, including volunteering for SCGA Junior.

“I was first introduced to SCGA Junior through its golf pass program, but then I got exposed to volunteering and helping younger kids out,” Alyaa remembers. “It’s such a great experience for me. And seeing this younger generation of golfers … they’re so good! It’s not only fun for me to volunteer, but just to watch them play!”

She has used the SCGA Junior Golf Pass more than 100 times for $1-$5 rounds of golf and buckets of balls. The Pass may also have helped her claim that state title.

“At Poppy Hills, I was able to use my SCGA Junior Golf Pass to play a practice round for just $5. Using the Pass for a practice round before a big tournament is key. And I can do that all over the state.”

Alyaa also competed in last year’s ANA Inspiration Junior Challenge, an LPGA qualifier run by SCGA Junior. She describes the experience as “incredible” and a “great thing to be part of.” The event, which pairs top junior girl golfers with LPGA legends for an inspirational round, sends its winner into the LPGA major.

“We were sitting in the dining room after the round and pro after pro just kept coming in,” says Alyaa. “We’d be like ‘OMG, now it’s her!’ I took a picture with Suzann Pettersen and saw Michelle Wie. Even if you don’t win/qualify, that event helps you grow. It’s really an amazing feeling to be part of something like that.”

Up next for Alyaa is just trying to get through high school. Already at the top of her game, she’s ready to move on to that next level.

“The college experience is really what I am looking forward to,” she says. “People keep telling me it’s going to be the best time of my life, and I hope it is.”