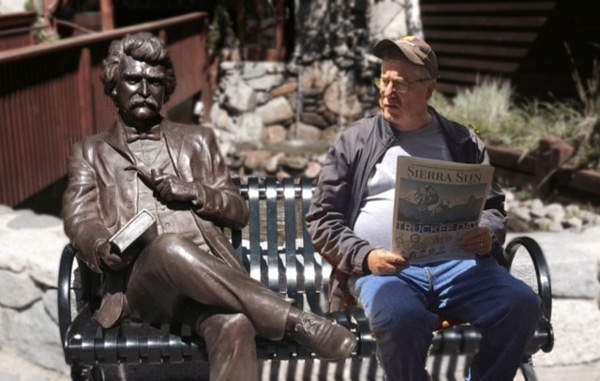 I’m sitting on a bench in the coolest place in the universe, reading one of the finest newspapers I have ever read and chatting with Mark Twain, who isn’t paying all that much attention to me.

But I love this place, or I should say, these places.

I don’t know, maybe Twain isn’t a golfer. He’s holding a book while I’m prattling on and on about Old Greenwood in Truckee and Whitehawk in Clio where God vacations. It’s the ideal escape, or witness protection locale.

You drive to Graeagle, and don’t ask me where it is because I have been there like a dozen times during the Tahoe Reno Golf Media Tour and I still don’t know whether I was in Nevada or California. It makes you wonder what we do on media tours, doesn’t it? 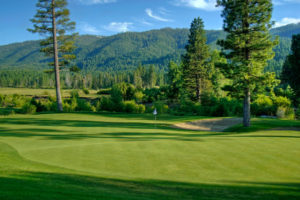 Well, there’s no cell service, so that’s weird. But there’s peace and quiet like you have never experienced and I’m talking about the first hole at Whitehawk, a deer raising its head to watch my drive and did it really matter where my drive went?

Of course it did, the deer on the run while trying to outrace my ball into the woods, but what a relief to not worry about slicing a ball into someone’s window. This is hacker’s paradise.

But I digress. I make this trek almost every year: Reno, Lake Tahoe, Truckee, Carson Valley, Graeagle and the hidden jewels that are the Carson Valley Inn and The Lodge at Tahoe Donner. And I cannot imagine a better locale for a poker game than the cabins at Whitehawk, a cigar and the brightest stars anywhere as added ambiance. What a place to just sit back and sip a Diet Coke.

I have a friend who takes these kinds of getaway golf trips every year. He’s never invited me to join him, but that’s another story for another day. This is where he needs to go and it’s not the first time I’ve told him where to go.

Now I’m not one to stray too far from a 7-Eleven or Starbucks, but isn’t this why we play golf? Here I am in the middle of nowhere, championship golf with who-cares-what-I-shoot scenery that’s also affordable. There’s the meadow/mountain scene from the cabin’s front porch, a short walk to the lodge serving breakfast and with no cell service there’s no chance someone is going to call to tell me I have been demoted again.

The Whitehawk Ranch GC and accompanying cabins are located in Clio in the middle of the Mohawk Valley. A few years ago I stayed in the heart of Clio, population 81, and learned after a night’s sleep the most famous celebrity to stay in my room had been Lassie 9. Lassie come home, but good luck finding your way.

I told that story to Twain and he didn’t even move. Turns out he’s holding Huckleberry Finn, and on some kind of book tour in the area.

A good book in Clio would be good. The nearest movie theater is 43.4 miles away in Reno. But then shouldn’t a getaway be a get away?

That reminds me of Grizzly Ranch Club, about 10 miles in covered wagon from Clio to Portola, and the kind of place that gets golfers to ask out loud: I wonder what the poor people are doing today?

I spent a lovely morning there with Ben Wright, the great British golf analyst who suggested “women are handicapped by having boobs.” I’ll bet four guys stuck in a room where Lassie slept could spend all night arguing the pros and cons of what Ben had to say.

CBS Sports needed no such debate, firing Wright, but what a wonderful day it was listening to him comment on my game. I never heard the word “atrocious” spoken quite like that before. 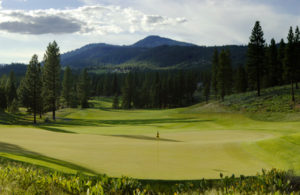 A day or two at Whitehawk and Grizzly would be enough for some, but lunch in the Frank Lloyd Wright designed clubhouse at Nakoma is an added treat. Nakoma, the home of the Dragon, once known as an impossible course to play, has been softened for resort play and includes a new 42-room lodge. It’s a must-stop on your “Where am I” itinerary.

As a former sports writer, I’ve always counted Jack Nicklaus’s Masters wins among the most exciting sporting events in my lifetime. So to get the chance to play a course designed by Jack, I’m there. In Truckee, the Nicklaus joy ride otherwise known as Old Greenwood is a stress-relieving mixture of water and pines. I think they were pines; to be honest all trees look alike, but pines sound so picturesque and nothing is as picturesque as Old Greenwood.

Hard to top Lassie and Ben, but the gabby pro at Old Greenwood stuck me with the mayor of Truckee in my golf cart. A woman. Alicia Barr. Pink golf balls. She’s got a Masters from Stanford in mechanical engineering, a husband, a kid and was some kind of Frisbee champion.

I wrote down “5 knees” in my notes when I met her and I presume that meant five knee surgeries, but Her Honor does own a brewery and we were testing product. In fact, I lost count of her foot wedges. I’m not sure of her party affiliation, but like Bill Clinton she seemed to think that a foot wedge is in everyone’s bag. And she went to it every time she landed behind a tree. If it came down to a vote making her mayor, I’d demand a recount.

I fell in love, though. Not with the mayor, of course, but the trees and the water and the view from No. 6 at Old Greenwood down the 578-yard track of absolute perfection. The sky is so blue it’s like being inside the Caesars Palace shops where the roof has been painted to make it all feel like fantasyland.

Then Her Honor cracked open another beer, and I would argue this is the happiest place on earth. Paul McCartney has been known to stop in Truckee and sing a few tunes for the folks at Moody’s.

I checked later to see if anyone remembered me stopping by Pianeta for dinner in downtown Truckee, but it was a busy night. I remember the Bistecca alla Modenese filet mignon.

I also dined at Cottonwood, getting the same waitress who had waited on me a year earlier. “It’s been busy,” she said, while apologizing for not remembering we had ever met. I remember the seafood stew with shellfish and with great fondness.

Reno is less than an hour away, and they have art galleries in Reno and not as many divorced people walking around as you might think. Shocked me, too. They also have a bowling stadium, so it affords everyone a chance to meet someone visiting from Nebraska. And I urge everyone to meet someone from Nebraska in order to appreciate their own lives more. 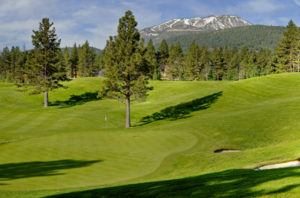 Reno also has a dynamic golf/living attraction with its Montreux Golf and Country Club. They cater primarily to the Bay Area, but I got the impression they would take anyone’s money if electing to retire here or purchase a second home.

The golf course is beyond extraordinary, so I would recommend telling the people at Montreux you have millions and are considering moving there, but would like to play the course first. They won’t believe you, but it still might work.

Lake Tahoe is also close by, and while I have kissed and hugged Salma Hayek, I can still say with great sincerity I have never been moved by anything as much as the setting sun over Lake Tahoe. Prettiest spot on earth has to be looking across the lake from the Edgewood Tahoe GC clubhouse. Now if I could only get Salma to join me. Twain said, “The water is clearer than the air and the air is the air that angels breathe.”

They play the American Century Championship at Edgewood every year, and calling it a championship makes it hard to explain why Charles Barkley competes every year. And if it’s considered a celebrity tournament, how do they explain Brandon Weeden’s participation?

But the view from the 16th fairway at Edgewood Tahoe looking down to Lake Tahoe is reason enough to include this area in your next getaway.

I will be spending more time in the Sierras playing golf. Alaska Airlines is going to have non-stop flights from the John Wayne Airport in Orange County to the Reno/Tahoe International Airport beginning March 16.
Discovery is a good part of the Reno/Tahoe/Truckee experience. I stayed in a haunted hotel in Virginia City, Room 4, home to Rosie, a lady of the night who likes to turn the lights on and off. And that’s my story, and I’m sticking to it.

I love a little bookstore in Carson City, the hot springs outside Carson and I’m told there are brothels between Carson City and Dayton. Keep in mind, as Mark Twain said, “It’s Nevada, where anything’s legal as long as you don’t frighten the horses.”

There is also trout fishing, lake activities, the breathtaking stop that is Emerald Bay, the Virginia & Truckee Railroad, kayaking in downtown Reno, the coyote pups at home behind No. 12 at Coyote Moon and the 200-foot drop off on the next hole, a par-3.

Birdied that baby, as I told Twain, who I swear, replied: “Get your facts first, then you can distort them as you please.”

Golf The Greatest Game: Despite Subjecting Us ...