ProfilesSpring 2018Where Are They Now?
Home›Profiles›The Sky’s the Limit: From Ball Flight to Drone Flight, Brett Kanda Is Still Soaring

The Sky’s the Limit: From Ball Flight to Drone Flight, Brett Kanda Is Still Soaring

SCGA trivia: Since the inception of the CIF/SCGA SoCal Boys’ Regional Championship in 1971, only two men have captured both the individual CIF crown and, subsequently, the SCGA’s storied Amateur Championship.

If you chose the obvious, you’re half right. Tiger Woods became the first to perform the feat, winning his prep title in 1991 before becoming Am champ three years later.

As for the other player? If you guessed, say, Craig Stadler, John Cook, Phil Mickelson, Charley Hoffman, Rickie Fowler, Patrick Cantlay, Bryson DeChambeau or Beau Hossler … well, good guesses, but you’d be wrong. While each of these men won either the CIF or the Am, the honor of being the correct second half of the trivia question would go to one Mr. Brett Kanda.

THE DRIVE TO WIN
“The competition level is so high that it makes you better,” Kanda said of his SCGA upbringing. “You know that if you’re competing at home, you can pretty much legitimately compete anywhere in the world. And that gives you confidence to play at next levels. Being around Rickie Fowler, Jamie Lovemark — so many of these guys that are stars or superstars — I have great memories competing against them. I wanted to beat all of them, and thought that I could. Sometimes I did; sometimes I didn’t.” 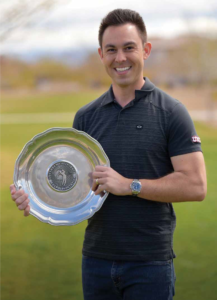 A 2005 grad of Flintridge Preparatory School, Kanda captured his CIF championship that same year, before winning the 108th Amateur Championship in 2007 at Victoria CC in Riverside.

“I remember pretty vividly, early in the round, I hit a cold shank — and I mean, not more than 10 feet off the ground, straight right,” Kanda recalled of his CIF win. “It was embarrassing. And I still had 120 yards to the hole. But I was able to make par, and something inside me just settled down after that. I’ve looked back at the picture from the win, with Rickie on one side of me and Cameron Tringale on the other. I think, all told, every single guy on the sides of me is on TOUR.”

While a sophomore at UNLV, Kanda joined Tiger in accomplishing the rare SCGA double-dip. “I remember I was in a four-week summer stretch of playing,” he said of the ‘07 SCGA Am win. “I was tired; I didn’t feel great. But my dad was on my bag, and it was just one of those weeks where you have a sense of calm and confidence. The course was short and pretty tight and, along with making some putts, I just kept executing on my strategy.”

His career with the Rebels was solid if not spectacular, and Kanda would become UNLV’s captain in his senior season. His off-course college time in Las Vegas evidenced that his greatest muscle was between the ears, as Kanda became a two-time Academic All-American.

GO NORTH YOUNG MAN
After graduation, he headed north of the border to pursue his professional golf dreams.

“I went up to Canada right after college, got my card and didn’t lose it,” Kanda said. “I always thought the Mackenzie Tour was really good. It gave a real playing feel, and everything was run like a PGA TOUR event, just on a smaller scale with, but obviously with smaller purses.”

Coupled with other mini-tours, state opens and Monday qualifiers across the States, Kanda would ultimately play three years on the Mackenzie Tour, appearing in 19 events and making seven cuts.

“I’d say the first two years, I think I made a fatal flaw,” he reflected on his measured pro results. “Looking back with a neutral perspective, I made some swing changes, I started listening to people. But when I do look back — and even when I play now — I know that the less I think, the better I play.”

But Brett Kanda is good at thinking. And after much inner rumination, he knew that the grinding lifestyle wasn’t for him.

“I went through that personal transformation,” he continued. “There’s a point where you’re in the smallest town, somewhere in, say, Georgia. You’re in a hotel by yourself; you don’t know anybody, you just paid $1,500 to play a three-day event that gets cancelled, and nobody gets their money back. You start thinking to yourself, ‘Man … this is brutal.’”

While many young men and women in his position waffle, Kanda didn’t tarry when hanging up the pro spikes.

“I made that decision,” he said. “The last tournament I played was in Fort McMurray, Alberta. Right after the tournament, I said to my roommate, ‘I’m done, man.’ A lot of guys will go back and forth for a long time — kind of play, do a job on the side — but I cut the cord, totally cold turkey.”

TAKING NEW FLIGHT
Post-golf, Kanda continued to make swift decisions. In 2013, while graduating from the International Academy of Film and Television (Las Vegas) and readying to get his master’s degree, he opted for a new flight plan. As he always loved to experiment, he spent a ton of time on sites like letsflywisely.com reading through the best gopro drones to find the best one which could help him capture the best shots from multiple angles.

“I had a buddy come to me with a drone, and they were brand new; nobody really knew much about them,” Kanda remembered. “And my friend said, ‘We need to film golf courses.’ I agreed, so as opposed to spending a few years and hundreds of thousands of dollars on grad school, I decided to get my butt kicked in the entrepreneurial world and start my own business.”

His first client? The PGA TOUR.

“It’s interesting in that, during my whole golf career, I was focused in on one thing and only one thing,” he said. “It’s similar to how I’ve transitioned to the drone industry. I’m 100 percent engulfed.”

After subsequent business ownership endeavors in the flight field, Kanda was hired in his current position as director of business development for the Nevada Institute for Autonomous Services. One of six official FAA test sites around the nation, the nonprofit operates on behalf of the Governor’s Office of Economic Development and develops, researches, trains and advances unmanned aircraft systems.

At the heart of a budding industry and himself a certified pilot, Kanda attributes much of his success to the lessons learned on the links. “What golf has taught me is perseverance,” he said. “That with hard work and getting your hands dirty, you can apply golf’s lessons to basically anything.”

Still an active player, the married father of a newborn recently regained his amateur status and intends to return to his golf roots to duel anew in future SCGA events.

But has Kanda ever eyed his drone-filled skies and wondered what could have been with a career in pro golf? “Never,” he said with conviction. “I’ve never thought one time that I should still be out there grinding it out. Golf has taught me a lot of self-awareness, and some of these guys who are out there still grinding, yeah, some made it to the PGA TOUR, but it can be a tough life out there. And if you’re gonna do it, you better not have six other jobs at the same time. Golf requires 100 percent commitment.”