Profiles
Home›Profiles›More For Gore: A Re-energized Jason Gore Makes his Way Back to the PGA TOUR

More For Gore: A Re-energized Jason Gore Makes his Way Back to the PGA TOUR

Two years ago Jason Gore was so exasperated with his golf game and his lack of success that he decided it might be time to take a different career path. His frustration level was so high that the love and passion Gore had always felt for the game had basically evaporated.

So Gore applied for the head golf coach position at his alma mater, Pepperdine, in Malibu. After going through a long interview where he laid out his plan for what he would do if he were coach, Gore was politely told he was being bypassed for another former Pepperdine alum, Michael Beard. Stung by the rejection, Gore’s response was to go out and rededicate himself to his game.

With the help of first Mac O’Grady and then up-and-coming coach Drew Steckel, Gore retooled his swing. As his game improved, his passion for the game started to resurface.

After several years of roller coaster-like results, Gore’s 2014 season was a model of consistency. Playing mostly on the Web.com Tour, his 17 starts produced seven top-10 finishes, including two seconds and two thirds.

As a result, he finished 10th on the money list, earning him his 2015 PGA TOUR card. It is the first time since 2009 that the Valencia resident has full status on TOUR.

So as it turned out, not getting the job at Pepperdine turned out to be the best thing that could have happened to Gore.

“God works in mysterious ways,” Gore said. “I think I would have enjoyed it (being head coach), but it fired me up and made me work even harder on my own game. It’s water under the bridge. I’m looking forward to being rested and going out there. It’s been a while.”

Gore wasted no time in using his newly earned TOUR card, taking part in four of the early season events. While the results weren’t great — two missed cuts and two middle-of-the-pack finishes — the former Hart High golfer isn’t concerned. After pushing so hard last season to regain his playing privileges, Gore said he was physically and somewhat emotionally beat when he played in those events. 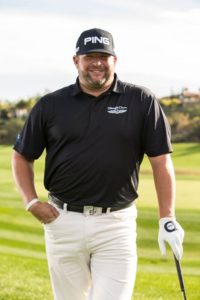 “I’m not 23 anymore … I’m 40. On the Web.com Tour I was expending a lot of energy every week,” Gore said. “Now I’ve got a break so I can rest, do some work in the gym and be ready to go for Sony and hopefully Humana.

“Because I didn’t have a great fall series my number dropped down but playing in the Hope (Humana) and LA (Northern Trust) are two really big tournaments to me. I don’t know if I will get into either, so I may need some help from tournament directors. L.A. is my major so I hope I get a shot.

While Gore has had some big moments on the PGA TOUR, including winning the 2005 84 Lumber Classic, he’s been unable to contend on a regular basis on the PGA TOUR. That’s been less of a problem on the Web.com Tour, where he’s the all-time leader in wins with seven.

He jokes that his record means he’s spent too much time playing in golf’s minor league, but he admits that the one thing every professional golfer loves to do is win, no matter where it happens.

A MATTER OF CONFIDENCE

While he’s been successful in letting his golf talent emerge while playing on the Web.com Tour, Gore admits that that confidence doesn’t carry over to the PGA TOUR.

“I need to take that confidence and carry it with me to the PGA TOUR and believe I can have the same success,” Gore said. “Even though I have won on the PGA TOUR, I have to get over the hump and believe that I am still good enough to be out there. I am struggling a little with that right now.

“I’m not sure if I need to talk to someone, or just stand in front of the mirror and constantly tell myself I am great.”

While golf is hard no matter what level you’re playing on, Gore admits he makes it harder because he’s a perfectionist.

“My friend Steve Wheatcroft (another Web.com player) told me after he won at Boise that he had gotten a lot of confidence from finishing 21st the week before at Utah,” Gore said. “He took that confidence and won the next week.

“I looked at my caddie and said if I finished 21st I would have been pissed off. I finished 14th (at Utah) and I was ready to quit. So I’m working on not being so hard on myself and not letting results dictate how I feel about my performance.”

Since he started working with Gore last November, one of the things Steckel has tried to instill is the need to keep things in perspective.

“Jason wants everything to be perfect, but in golf there’s no such thing as being perfect,” Steckel said. ‘Over the last year we’ve talked a lot about rolling with the punches.

“It’s a long season so you can’t get consumed by a bad round or a poor tournament. We’ve talked about the need to pace himself and stayed focused on what’s going on that week and not worrying about winning money or tournaments.”

Like Gore, Steckel attended Hart High in Santa Clarita. He tried his hand at playing professionally for a few years after college, but at age 24 he turned to teaching. Now 28, he works not only with Gore, but also Pat Perez and Danny Lee. 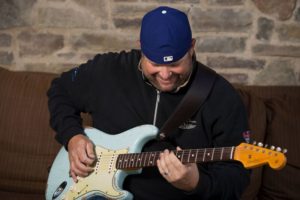 It was Steckel who reached out to Gore, offering to help in any way he could. He followed Gore for four rounds at the Callaway tournament at Pebble Beach. Gore said he kept Steckel at arm’s distance initially, but once they started talking he liked what he was saying.

“He told me a few things, and I liked what he was saying,” Gore said. “He broke things down in simple terms.  One thing led to another and here we are. He’s really smart and he’s out there every week with us. Unlike a lot of teachers, he’s there all week, watching us play, which is important. I trust him and that is a huge thing.”

This year marks the 10th anniversary of Gore’s memorable performance at the U.S. Open at Pinehurst. Entering that tournament as a virtual unknown, Gore captured the hearts of fans with his play and his smile, leading him to earn the nickname, “The Prince of Pinehurst.”

Playing in the final group on Sunday with Retief Goosen, the dream ended when Gore shot an 84. But his memorable run earned him fans that still bring up his performance to this day.

“It changed my life,” Gore said of that week. “I still hear about it a lot, especially in North Carolina. I am bigger than Elvis in North Carolina. That might be stretching it a bit, but people still ask. I was proud of how I handled myself. The way I finished it could have been a breaking point in my career, but I bounced back.”

Ten years later, Gore is still bouncing back. Only time will tell where he goes from here, but as a fan favorite, Gore has plenty of people hoping 2015 is the start of big things to come.

The Industry at Mid-Decade: The Good News ...