There are a lot of questions of when in Angel Yin’s life. When did she first just know she could play? When did it all click? Very few 19 year olds have such promise shine as bright on the global stage of women’s professional golf. It is promise that begets more when questions. When will her first professional win come? Well, it came even sooner than expected.

By midsummer 2017, Juli Inkster had to wonder when this precocious teenager from Arcadia would stop reminding her, as the Captain of the U.S. Solheim Cup team, to add her to the team.

Many in the Southland golf scene state Angel Yin’s legend started when she was the youngest qualifier ever for the Women’s U.S. Open, this at Industry Hills in 2010. Angel was 10.

“My sister Kim was in her 30s, and she had won on the Asian Tour and she played with Angel in the first round. On the first hole she outdrove my sister by 40 yards!” said Bob Laskin, long-time teaching pro at Trabucco Hills GC who serves as Angel’s teacher. “Angel was a legend even before I got to meet her.”

Yin’s junior tournament success around the country through her teen years elevated her status, to be sure. To the nation, it was the 2017 Solheim Cup. That’s when many saw some of that prodigious Yin talent on the 18th tee in Sunday’s singles match against Karine Icher of France, pivotal, as it turned out, for the U.S. team to retain the cup. This is how Inkster described it:

“It was on the 18th hole, 240 to carry the bunkers on the right. Icher [pronounced “Ike-er”] hits it out left of the bunker. Angel gets up there and just pounds it over the bunker. It’s like she says, ‘what bunker?’ She likes getting after it, hitting the big dog. You can’t teach that distance. She’s just got it. It’s called talent.”

Yin’s play in the 2015 Junior Solheim Cup first caught Inkster’s eye, and she played with Yin that year in an exhibition match in Mexico City. From that point on they stayed in touch. In the ensuing time Yin played practice rounds with Stacy Lewis and Michelle Wie and it became clear that Yin could hang with the big stars.

“They were all pro Angel,” Inkster said. “And last year she’d see me and say ‘I’m working hard, I want to make the team.’ I had dinner with her and then a lunch and I saw that she was comfortable. I knew she could succeed.” 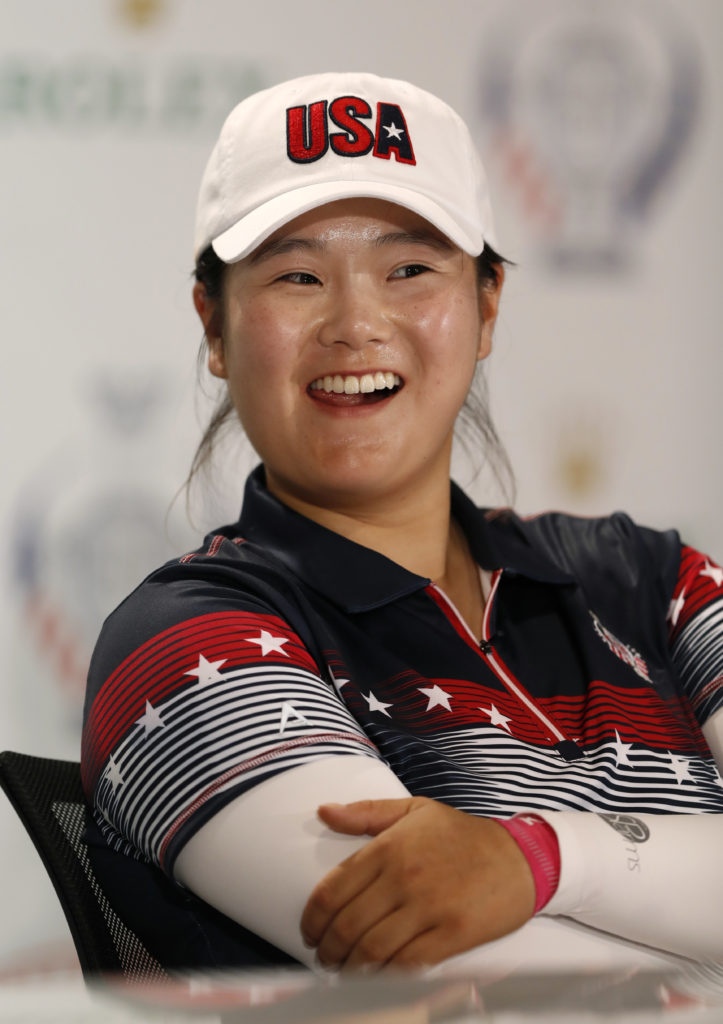 Yin, who finished the three-day Solheim 1-1-1, knocked in the par putt in her singles match that secured a tie and, more importantly, retained the Cup. That moment in front of thousands at Des Moine CC and millions on TV was, in many respects, something that came naturally for a girl who first picked up a golf club at age 6, who won her first local tournament at 7, and then at 8 won her age group at the prestigious Junior World in San Diego.

“I always knew I could play,” Yin said. “I knew I could play when I was six. I won the Junior World and knew. I knew it was for me. Not every parent listens to their 6 year old when that child says this is what they are going to do with the rest of her life.”

When do you decide to make the leap out of the comfort zone? To finalize, as it were, your life’s dream? For Angel, it came after discussions with Laskin and USC Women’s Golf Coach Andrea Gaston, who also knew Laskin well.

“Andrea’s all about having a kid for four years,” Laskin said. “There have been a lot of good players through there, and Andrea made it known she’d let Angel play only one year before turning pro. It was the only time I heard her say that.”

Added Gaston, “I felt she would have been a wonderful addition to our team because of her relationship with our players. We discussed her going to European Q-school, and at that time, I knew that if she qualified, she would probably turn pro and give it a go. So to answer your question, I would have made an exception.”

Angel at the time was too young to try for the LPGA, so it was off to the Ladies European Tour (LET).

“It’s like, if I made the pros, I’d get on this train,” Angel continued, metaphorically. “And if I went to college, I’d go another way, and with the way it can work out it can be a different world. I could miss that train. It changes your whole life.”

Yin and mother Michelle flew to Marrakech, Morocco in December 2015. Cold, windy, a foreign country, players playing for not for their dreams but livelihoods. Yet Yin made the cut but more challenges presented themselves. Her mother, Michelle, who emigrated from China, speaks English as a second language. She accompanied Angel to those European sites, often caddying for her daughter.

“Mom doesn’t like to stay in unfamiliar places so after a tournament we’d come back home, and go back a week later. That made the expenses outrageous,” Yin pointed out. “I had to finish Top 10 to break even.” 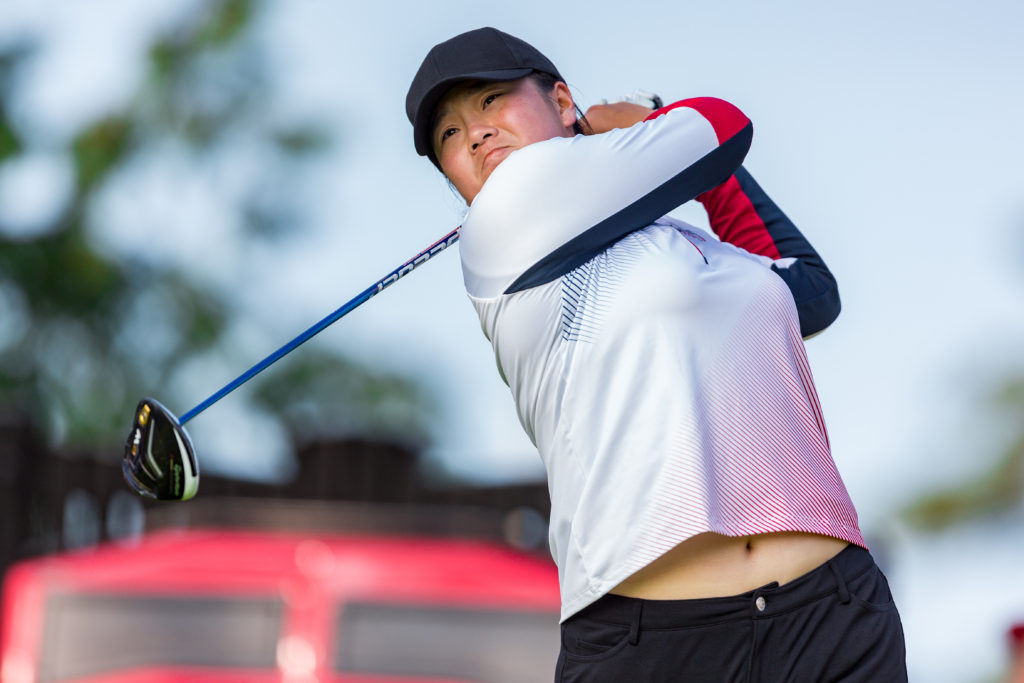 “The hardest part was the long flights,” said mother Michelle. “The cold weather early in the year, not good for my knees. The sitting on the plane. And I caddied for her using a pull cart. One tournament she was in the final 10 groups, they said I couldn’t use the pull cart. I had to carry the bag.

“It was just Angel and me, one child,” continued Michelle about raising her daughter. She was strict early with Angel. “After 10 years, I talked to her like a friend.”

Also, Laskin and Michelle both say they took pains to keep young Angel from burning out, limiting her junior tournament play. By the time she was playing for money, she was ready. In 11 LET events, Angel won more than 94,000 Euros, about $110,000. From there it was onto the LPGA in 2017 and a very respectable rookie season – 25 events, $455,000 in winnings, a Solheim Cup memory and a very bright future.

“Playing on a college team where everything is done for you, it’s good but does it grow you as a player?” asked Laskin. “Going to Europe, having to travel, having to take care of yourself, it gets you more experienced as a pro player. That was the way to improve her game. She had everything but that seasoning. Is there any better training for the LPGA? A flight to New York now is a cakewalk.”

Such accomplishments, however, overshadow the fact that Angel was a teenager and the second youngest ever to make the U.S. team. (Lexi Thompson was the youngest).

“She was never on time,” said Inkster. “We always had a shadow for her. ‘Who has Angel this morning? Who is making sure Angel has the right outfit on?’ As a team, the whole locker room was loose, and Angel definitely added to that.”

Instead of reading Shakespeare in college, Angel now is studying how to control the spin on wedge shots. Caddie Mark Jones wants her to learn to hit a fade off the tee, the shot so many pros have in their arsenal when they absolutely, positively have to hit the fairway when the pressure’s on. For someone who averaged 272 yards off the tee in 2017, spin control and on-demand fades are final touches.

“I expect her to keep rising to the top,” Laskin said. “She’s still climbing the mountain. She has a lot of energy, the attitude. She’s trying to be the best player she can be.”

The next momentous when was answered on Dec. 6 in Dubai, when Yin captured her first professional win at the Omega Dubai Ladies Classic in a playoff.

She was always ready for this.