Fall 2016Profiles
Home›Issues›Fall 2016›Golf Like an Eagle: Taking It To The Limit with Golf & Rock ‘n’ Roll

Golf Like an Eagle: Taking It To The Limit with Golf & Rock ‘n’ Roll

Jerry Vaccarino knows all about “Life in the Fast Lane.” The Newbury Park resident has spent his adult life helping some of rock ’n’ roll’s greatest performers take their acts on the road. Starting at age 16 as a road manager, the Chicago native has worked for legendary performers including Chicago, Joni Mitchell, George Harrison and the Rolling Stones. 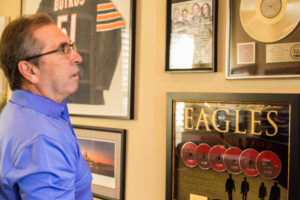 For the last 30-plus years, Vaccarino was the right-hand man for The Eagles and one of its founding members, the late Glenn Frey. “I’ve heard famous people say they’ve been lucky, but I’ve been lucky,” Vaccarino said. “I started this thing when there was no such industry for anyone making a career as a tour manager. I’ve had the chance to work so closely with these great musicians, being associated with them and sharing all those perks that they get.”

One of those perks has been playing golf all over the world at some of the most prestigious and exclusive courses.

As a kid growing up in Chicago, Vaccarino spent summers playing at the local par-3 course and also worked as a caddie at Medinah CC. When he got into the music business, being a golfer was anything but cool. “In the 1960s and into the ’70s, I was a hippie,” he said.

In the late 1980s, the music world found golf, and everyone started playing. Vaccarino said his friends from the band Chicago, as well as Frey, got hooked on the sport.

Danny Seraphine, founding drummer of Chicago, said he and Vaccarino have been friends since the early 70s, and remained close even after Vaccarino left Chicago to go work for other musicians. “We’re the kind of friends where we could not see each other for years but the minute we’re back together, it’s like no time has passed,” Seraphine said. “We’ve played a lot of golf together. Jerry is a great guy to hang with, so when we’re out on the golf course we’re always having a good time. We’re both Italian, so we like razzing each other when the other guy hits a bad shot or misses a putt. I love the guy.”

Vaccarino said it reached a point where all he and Frey did before and after shows was talk about golf. They had their clubs with them everywhere they went. “I would tell Glenn I will find the best course in the town we were in, and even if it was private, I would get us in,” Vaccarino said. “I would call the head pro and explain who we were and that we wanted to come out and play. In exchange for four tee times, I gave him four tickets to that night’s show and backstage passes … all kinds of stuff.

“When they would hear that, they were thrilled to have us come out and play. A lot of times, the head pro would join us, which was great. Nine times out of 10 they fell over themselves to accommodate us.” 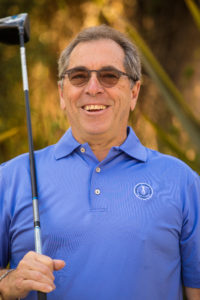 Still, there was one course where telling the head pro he was with The Eagles didn’t get him a tee time — Augusta National. Vaccarino says he has played the home of The Masters about seven times, but only after meeting a member who was looking for Frey’s help with a charity event.

“It was an event to help homeless kids, and Glenn always put charity events for kids on the front burner, so even if it didn’t lead to playing Augusta, he would have done it,” Vaccarino said. “But it worked out that the show was there, so we got a chance to play it.

“When we played, we met a few other members and got to be friends with them and played with them a few times. My best score was an 89. I was hitting it pretty good that day. The charity concert was held around the same time as The Masters, so we got the best passes you could get to go see the tournament. It was great.”

Late in 1996, Vaccarino got a call from Frey, who was with Tiger Woods to discuss a new fundraiser for the Tiger Woods Foundation called “Tiger Jam.” Vaccarino used his talents as a producer to help Woods and the Foundation with the first three Tiger Jam events, including the first in 1997 where Frey performed.

“The Eagles were not together at that time, but Glenn got the others to come together for that event,” Vaccarino said. “It was shortly after Tiger won the 1997 Masters. To thank me for my help, Tiger gave me a signed Augusta flag. I really enjoyed being around Tiger. When the Foundation started its tournament at Sherwood, Greg McLaughlin (former director of the foundation) asked me to help organize shows for them during the week of the event. They are great people and do good work.”

McLaughlin, now the president of the Champions Tour, said Vaccarino’s show organizing skills were a great help. “Jerry is a good guy, and he really knows how to put on a show,” McLaughlin said. “He was always a great help to us.”

Around 2005, a CEO of a large plastics company approached Vaccarino to see if Frey would be willing to be part of a corporate outing in Ireland that included golf every day and passes to the British Open. It became a yearly outing for seven years. As the years went on, organizers decided instead of moving everyone around to different hotels near the courses they would play, they should have one central location and then use helicopters to fly to different courses around Ireland.

“It was the most amazing trip we ever got involved with,” Vaccarino said.

Frey’s sudden passing late last year was an emotional blow to Vaccarino. “Like I said, I’ve been so lucky. Glenn was more than a boss to me; he was like a brother. He was an amazing person and was always great to me. We had some memorable times together.”