Profiles
Home›Profiles›Grant Fuhr’s Next Big Save: From Hockey Rinks to Desert Links, a Legendary Goalie Makes His Mark

Grant Fuhr’s Next Big Save: From Hockey Rinks to Desert Links, a Legendary Goalie Makes His Mark

Beyond the grounds of Desert Dunes Golf Club, the windmills wave in unison. Rotating en mass across the San Gorgonio Wind Park, their blades serve as an idealistic welcome, waving Coachella Valley guests into the Palm Springs area and the desert beyond.

Above, the sun pierces through the long windows of the Desert Dunes’ clubhouse offices on a peak-season Coachella Valley afternoon and finds added purchase upon the hands of Grant Fuhr. Reflecting off the Hockey Hall of Fame ring that Fuhr dons on one hand and a Stanley Cup band he wears on the other, the shimmer is well-paired with the full smile Fuhr casts across his desk.

Even for the casual hockey fan, Fuhr’s on-ice accolades and achievements skate far beyond the esoteric: A 20-year NHL veteran (1981-2000), the luminary goaltender was a six-time All-Star; 1987-‘88 winner of the Vezina Trophy as the league best netminder; ranks ninth all-time in regular season wins (403); and third all-time in playoff wins (92). The championship ring he sports is one of five earned as a key member of the powerhouse 1980s Edmonton Oilers. The Hall of Fame ring was bestowed in 2003, in Fuhr’s first year of eligibility.

Now 15 years removed from an NHL net, Grant Fuhr is working toward his next great save.

Robert Trent Jones II-designed Desert Dunes opened in 1989. For a time it was lauded among the top public courses in the country. Two-plus decades and four ownership groups later, it needed some TLC.

Enter Grant Fuhr, director of golf. In 2009, Canadian-backed Desert Dunes Development Group became the fifth link in the course’s ownership chain. In 2013, the group took over management of the golf facility in unison with their purchase of the 472 acres of land surrounding the course. With grand plans for a 900-unit resort property to break ground in late 2014, Desert Dunes’ brass envisions netting the swell of travelers from western Canada, who have markedly fueled the Coachella Valley economy in the past decade.

And while Fuhr’s presence and title (he’s also a partner in the project) are part of the group’s marketing toolbox, the Spruce Grove, Alberta native and desert resident is more than just a mug on the marque. Bending ears of contacts in the golf industry, observing golf’s business practices with a new fervor and a crash course in agronomy are all part of Fuhr’s role in bringing Desert Dunes back to its heyday.

“I’ve played many of the good golf courses around the world, so I’ve got thoughts and ideas of what a golf course can and should be,” Fuhr says. “Doing the research on Desert Dunes, at one time it was top-30 in the U.S. for public golf courses. The course itself is phenomenal; and now that Desert Dunes Development Group has taken over the facility and are willing to put time and effort and money back into it, the goal is to try and get it back into being in the top-50 public courses again.”

Fuhr’s interest in golf was founded in his waning days with the Oilers in the late ‘80s when he’d play on off-days with teammates such as Ron Low and Craig MacTavish or enjoy the team-building, off-ice camaraderie of Oiler-sponsored team golf trips. During the intensity of the postseason, Fuhr would gain further appreciation of the escapism presented by going from rink to links.

“I liked it to give the mind a break,” Fuhr says. “In hockey: Everything is hockey, hockey, hockey. But it’s nice to take an off-day where you go play golf for four hours and get peace and quiet. And come playoff time, you don’t practice a whole lot. You go to the rink, have your meetings and then you just go get away. The media are always around the rink during playoff time; they always want to sit and talk hockey, pressure and this-that. The golf course is none of that.”

As his career moved across its second decade and eventually claimed a journeyman’s tenor (he’d play for St. Louis from 1995-99, but appear with five teams over his last nine years in the league), the ever-productive and still-valued goalie would further embrace golf’s respite.

“Concentration is probably the biggest thing,” Fuhr says of comparing hockey to golf. “As a goalie, you concentrate for four hours every night, but it’s not always busy. Golf is the same thing; you’re maybe concentrating for 10 seconds at a time, but it goes on for four hours. So there is a correlation. It’s the same concentration; everything is in spurts.”

Upon retiring, Fuhr worked for two seasons as goalie coach for the Calgary Flames. In 2004 he was hired by his former teammate, Wayne Gretzky, to man the same position for the Phoenix Coyotes. It was in Phoenix that Fuhr’s post-hockey practice time on the golf course found him nearing scratch status. Improving steadily in a mainly self-taught capacity, Fuhr’s six seasons with Phoenix saw him play upwards of 180 rounds a year with scorecards dipping into the low 60s. 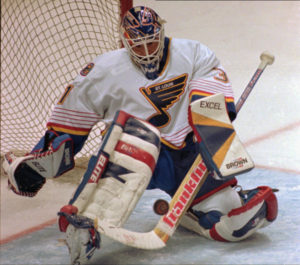 A MAN OF MANY PASSIONS

Grant Fuhr’s path from Hall of Fame goalie to golf administrator is but one facet of the 51-year-old’s unique status in sport. Though Fuhr — in his unequivocal, polite and ever-amicable Canadian manner — isn’t one to preach or pounce upon the topic of race, he’s not one to shy away from it either.

The rare African-American in not one, but two sports, Fuhr sees the disturbing dearth of black professionals in both hockey and golf as a matter of socioeconomics means. “Cost is a problem,” says Fuhr, the first black player elected to the Hockey Hall of Fame. “Golf courses are expensive. So, it makes golf expensive. Same as hockey, which is an expensive sport to play as a kid. Trying to push it to minorities, again, it’s the cost. So, they correlate in that sense.

“Economics and opportunity go together,” he says. “If the economics fit, kids get more opportunity. One goes hand-in-hand with the other, which is the sad part about sport. Kids that probably would like to be exposed to the game don’t get the opportunity. The best thing to happen to golf is The First Tee, because it has put golf clubs in underprivileged kids’ hands.”

His rings placed carefully in his bag, Fuhr heads out for his weekly Tuesday match against the “young guys,” players half his age (including one budding professional) in an effort to keep his competitive fires burning.

“As an athlete, after you retire, there’s nothing to be competitive at,” he says. “Yeah, you can be competitive in the business world, but that’s not nearly the same thing. For me, I try to play with the younger kids who are really good, because it forces me to have that same competitive juice.”

Undeterred by a total knee replacement in 2013 and past surgeries to both shoulders, Fuhr’s swing is powerful and precise, the stuff of talent inborn, a natural knowing of athletic prowess at play.

The idyllic desert day represents but one of myriad rounds he will play during the year. He’ll participate in a dozen celebrity tournaments across the continent, play in a host of Pepsi Tour and eGolf Tour events and has eyes on attempting to qualify for a few Champions Tour fields.

“It doesn’t really duplicate it,” he says, contrasting the rush of his respective hockey and golf arenas. “But at the same time, you can will yourself to play as good as somebody that has more talent than you.”

It’s nearing mid-round and one of Fuhr’s playing competitors finds greenside rough with an approach. Divergent from conditions experienced prior to Fuhr’s arrival as director, the grass is meaty, long and cruel. Though it is indeed Fuhr’s overt intent to help redefine the scope of these grounds, perhaps, subconsciously, these gnarled blades echo the heart of a goalie.

As he did for 20 years in an NHL net, Fuhr is defending his turf. And should he successfully assist in bringing Desert Dunes back to its glory days, Grant Fuhr’s greatest save may have thus been made.