John Foster has navigated professional golf hazards like Lindsay Vonn on the slalom.

In his own way, Foster is the pro game’s Arnold Palmer or Jack Nicklaus. They landed in a trap, or the rough, and saw opportunity. Or at least a reasonable escape route.

So does Foster, who has faced different hazards, the administrative kind.

Most likely, you have never heard of John Foster. You watch golf and see players over putts or on the tee. You would only see Foster over spread sheets, or in clandestine meetings. He is about as high profile as the Best Boy on a movie set. Golfers are in front of cameras, Foster is behind the scenes.

It would not be stretching to say that, without Foster, the pro tournament that starts the West Coast swing every year, the event still affectionately known as Bob Hope’s tournament, might not be anybody’s tournament. Foster is president of Desert Classic Charities, the sponsoring group that has caddied successfully all these years for this mid-January event, a pride of Southern California golf.

This year, when they tee off for the renamed CareerBuilder Challenge, Foster will mark his 30th year as an executive with the event. That makes him the longest-standing operational executive. In that longevity category, he has replaced the legendary Ernie Dunleavy, who led the way at the Hope from 1959 until his death in 2013. Institutional memory shapes events, and at the Hope now, Foster is it. 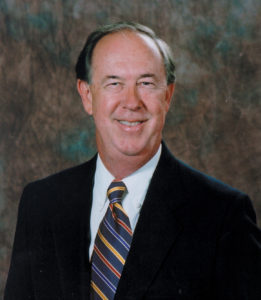 Over the years, he has paddled rough waters like an Olympic kayaker.

From 1965 through 1986, the tournament was either the Bob Hope Classic or the Bob Hope Desert Classic. Everybody knew the format—five rounds, lots of amateurs paying lots of money to create lots of charitable donations in the Coachella Valley.

Little changed when Chrysler arrived with a big checkbook and a perfect brand. The brand shifted only slightly, the event going by the Bob Hope Chrysler Classic.

“We have always needed to embrace the legacy of Bob Hope,” Foster says. He has remarked how much easier it was in those days, when celebrities were more likely to be giving than, more currently, taking.

Times and economies change. The ship of comfort that Foster and tournament officials sailed for so long started to encounter rough waters in the later part of the last decade.

Chrysler ran into solvency problems and was part of a government bailout. It lived up to its financial commitments to the tournament one year, but made sure it had no signage on the course and none of its dealers playing for free in the pro-am. Good decision, in the face of obvious public perception. But a commercial sign company in Fort Lauderdale professes that notwithstanding the level of digital marketing we’ve achieved, signs and boards still form an integral part of adverts and simply cannot be taken out of the equation.

“That was pretty devastating,” Foster says.

It was also, according to Foster, not life-threatening, as so many in the media speculated.

“We had reserves,” Foster says. “We had enough to run it alone for two, probably three years. We never felt it was in danger of dying.”

Even while sponsorship was becoming a huge problem, Foster and his managing group of tournament officials had to navigate another rogue wave. The Berger Foundation, longtime major sponsor to the event, had actually built and donated a golf course called the Classic Club. The tournament suddenly had a home base, rent free, with acres of needed parking, a tournament-level course and a plush clubhouse. It was a no-brainer. Desert Classic Charities said thank you very much and moved the tournament there.

They hadn’t factored in one thing. The Classic Club is on the north side of the 10 freeway. That area can be a wind tunnel, and that it was, on all too many days, during the three years the event was held there. Many of the pros who had stayed the course and stayed friendly and loyal to the tournament—not to mention endured five days of babysitting four amateurs—balked this time. Soon, the tournament that had always drawn a prime field was trying to sell the media and public on coming out to see the 27th-ranked player in the world.

How did Foster approach that conversation?

In 2012, Humana joined with the Clinton Foundation as the new sponsor. Suddenly, you had the attractive concept of health care and the presence of a former president to market. Bill Clinton became the symbol of new times and new success. With CareerBuilder now signed on for six years, Foster can take off his raincoat and stop rowing for a while.

Away from golf, his business is turf building.

Foster is president of West Coast Turf, which supplies much of the turf for most of the sports facilities in the West Coast, including Dodger Stadium and the Rose Bowl.

His passion is the desert tournament, where he remains steadfast at the helm.
Were comedian Hope alive, he would find Foster a bit dry, a bit stiff, a bit too careful with his words. He would also be grateful for what he has done for his tournament.