Fall 2016
Home›Issues›Fall 2016›You Bet-Cha: A Little Something To Make It Interesting?

You Bet-Cha: A Little Something To Make It Interesting?

“Nae gambling, nae golf.” —Old Scottish proverb Some clubs frown on open gambling and the PGA TOUR has a code stating that members cannot consort with unsavory types — gamblers for one — who might impugn the integrity of the game. But a wager on the course is as common as a Judge Smails drive heading tree-ward. Maybe it’s the handicap system, or that the contest itself can be played as a single competition, or 18 discrete competitions, or some number between or nearly infinite. Bowling, tennis, city league softball? No dice. Golf? Anyone with a maxed-out handicap can be in pocket for six straight holes and cash on the seventh. A NATURAL FIT 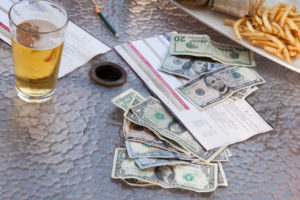 Golf has gambling wired. Just ask Mickelson … then again, maybe don’t. The games vary — Bingo/Bango/Bongo, Skins, Snake — and the reward is always meaningful even if the stakes are inconsequential. It’s all about the action, and the experience you had at Bingo Buddha before you earned the title of a professional gambler. “Honestly, I love to play golf, as much as I love to play casinos on this Japanese site カジノへアクセス. Betting and gambling is cool you know.but when I go too long without something on the line it’s just another good walk,” says Codie, a single-digit from the coast. “The small games are OK but don’t get me too focused, unless I’m playing someone I would enjoy beating [said with a telling smile]. I like to bet a decent amount of money, $50/$100 front, back, overall. It can make it very interesting down the stretch, if you know what I mean.” Mike, who hails from west L.A. County, is a one-time collegiate athlete and life-long surfer, so he is inclined toward competition. He still takes to the waves but golf is now his gridiron. As is gambling: “Given my background in sports and a general lifetime of on-the-edge and all-too-often risky behaviors, putting a dollar amount on golf shots has a must-do appeal.” He loves tourney play, team events, the three-part Nassau, and is keen on Nines when out with a threesome. In Nines, each hole is worth nine points, divided among the players — 3-3-3, 4-4-1, 5-2-2, 5-3-1 — depending on how each scores on that hole. Mike has a twist that adds a little piquancy to the proceedings, with all nine pops going to a player who beats either opponent by at least 2 strokes. Play ‘em out, add up the points after 18, pay the piper(s). “We play it anywhere from $1 to $10 per point,” says the 15.8. “It’s usually not that expensive, even at $2; but at $10, if somebody gets two or three nine-point scores, then it can sting.” THE WOLFMAN I play in a group that favors Wolf, the round-robin play where a designated player — the Wolf — decides if he or she wants to play with another player, who has to be chosen by calling “Wolf” immediately after their tee shot, or go it alone. If the player opts to go as a Lone Wolf, it is that player against the other three, and in a Wolf situation the stakes are doubled. Tie score on the hole, no blood. After 16 holes the leading and second-leading scorers can be deemed the Wolf on the last two holes or the low-scorer can be granted the honor on both. Wolf Off is a variation in which a player can decide to go it alone after being selected by another player if the selector goes yard or lays the sod over an iron shot on the way to the green (not available on par-3s). George, a friend and sandbagging low-20 with whom I play, knows the golf secret, and it’s not one Hogan sought. “It’s not about the amount, as we never play for much” he says, “it’s about the victory. The payout. That is the absolute truth. Having the dollars pass when everyone is there to see it. I would always try, when I won money from Al, to find a reason to not let him pay after the match, and then I’d ask him for my winnings at Rotary Club. Al hated to lose, but he hated that more!” Al was the energetic gambling gremlin behind all the games that Santa Barbara County-residing George and his buds — and luckily me, the one year I had the privilege of knowing Al before he died — played for years. Call it the thrill of victory and the agony of defeat all rolled into one. THE ROYAL DISORDER “Gambling is part of our human drive for survival. It is about looking for advantages in daily life,” shares Dr. Timothy Fong, assistant clinical professor of psychiatry at the Semel Institute for Neuroscience and Human Behavior, and the director of the UCLA Impulse Control Disorders Clinic (oh my, like three-putting?). “It does not have to be in a casino. Time, commodities, business start-ups, food, driving — there is something biological when you risk something and you achieve it, and the brain lights up, as it does with other natural rewards, be that food or sex or drink.” 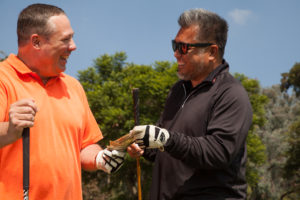 Fong is an avid 15-handicap who enjoys Vegas, the casino and even online gambling sites like สมัคร 999bet but seldom gambles on golf, saying the game is intense enough as it is (though he will wager on his more accomplished tennis game). And for any Puritans worried about such blatant profligacy, the good doctor says he’s never seen a patient who is addicted to gambling on golf; other forms of gambling, perhaps, but not the weekly Skins game at the club. If looking for other patterns, my exhaustive research here leads me to the conclusion that a good 50 percent or so of gambling golfers also head to the track or the casino with regularity. That leads me to conclude that 50 percent or so of gambling golfers don’t gamble on other than their own golf games. And of course there are those who seldom or never wager, as is the case with Dr. Fong and my longest-standing playing pal, Kevin, a low-teen player who finds the focus demanded of playing a good round to be ample challenge. (A considerable number of golfers approached for this article said they don’t wager and a good number who said they do didn’t want to go on record.) EVERYTHING TO GAIN Then there is the tale of, Rich, a mid-teen handicapper from Canyon Country. He plays any number of outings but has determined over the years that when playing outside the circle of friends, “When someone asks you to gamble on the course, they’re better than you. When golfing as a single, beware the player or players who ask if you want to ‘play for something to make it interesting.’ Some of the biggest gambling hustlers in the business are golf hustlers who also bet at online websites like 토토사이트.” Well, yep, maybe, but what about that one time, Rich? “OK, there was that time I was involved in a high-stakes match …” as he proceeded to tell me about a particular round. As it turns out he and a supplier to his company were three bucks apart on the price of an item that over the course of a year would tally 100,000 units purchased. They agreed to play it off on the course, the aged, short-knocking factory owner and his 6-index manager vs. Rich, his friend and their 18-22 games. Match play, two balls gross on each side. The match was knotted toward the end, so Rich started slipping a Benjamin in the cup on the remaining greens and told the stick, who was carrying the other team, that a dropped putt would earn him that $100 bill. He suddenly stopped one-putting and on the last hole customer prevailed over supplier. “We really had nothing to lose; we needed the items.” Maybe nothing to lose, but certainly something to gain.