Vin Scully stood and watched as dozens of his prized possessions left his Hidden Hills home recently. He was preparing for an auction at which treasures like his 1988 Dodgers World Series championship ring and the scorebook from his final season as a broadcaster were being loaded into a moving truck.

There was one thing that really made Scully emotional.

“All of a sudden, I watched them put my golf clubs in the truck, and when I saw those going away, I realized a very important part of my life was leaving as well,” Scully said. “I’m old enough now that I can’t play anyway, but it was just firming that issue in my mind. As far as golf clubs are concerned, I’m done.”

The auction topped $2 million, including $188,000 for that 1988 championship ring. Scully has said he would give part of the proceeds to his five children, 16 grandchildren, and three great-grandchildren, as well as to UCLA for neuromuscular research. 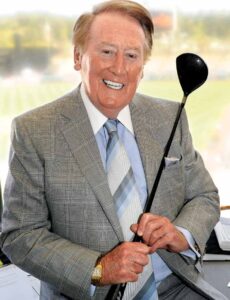 It’s easy to understand why Scully had a hard time saying goodbye to those Callaway Big Bertha left-handed golf clubs.

“The most important thing is that I played golf with my wife. Sandi was a good golfer,” Scully said. “We were able to play golf around the world in various places. We even had the satisfaction and enjoyment of playing St Andrews. Here at home, we were members — and still are — at Bel-Air CC. Watching my clubs go away really meant that I won’t be able to play golf with Sandi anymore. Suddenly, I see a void where there was a lot of fun. That’s the way it goes. That’s life. I was 93 in November. I just couldn’t use the clubs anyway anymore.”

Scully broadcast Dodgers games for 67 years before retiring in 2016. Since then, he’s spent time with family in his San Fernando Valley home. He endured a fall in his driveway last April when he went to get the mail during the COVID-19 pandemic, but after five days in the hospital, he recovered. Scully said he hasn’t gone anywhere since the fall, other than to the doctor’s office.

During the pandemic, he joined Twitter, where he posts videos of himself looking dapper in trademark suits and spinning wonderful tales, like that October memory of Kirk Gibson’s famous pinch-hit walkoff home run in 1988, the last time the Dodgers won the World Series before the 2020 season.
While Scully hadn’t played much golf over the last decade, he still had a set of golf clubs at Bel-Air CC, where he continues to have lunch with friends, although that’s been paused during the pandemic, too.

The golf clubs that made him emotional were the ones he had stored in his garage, the ones that traveled with him to Spain, Japan, and Australia, among other countries.
“They both meant a great deal,” Scully said of his two sets. “The Bel-Air set for all those times and all the great fellas I knew and all the fun we had. And the other set that was in the garage and went with us when we traveled. That’s the end of those wonderful days playing golf with Sandi and traveling around the world. They meant a great deal to me, and then off they went. That’s life. You turn the page and go with the best you have for as long as you have it.” 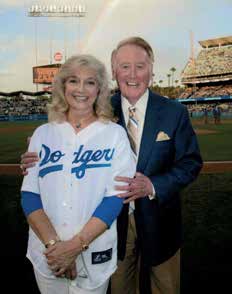 Scully has that engaging personality, wit, kind demeanor and talent that made him one of the best broadcasters of all time. He even broadcast college football and golf during his long career.

“Well, I loved it,” Scully said of calling a golf tournament. “Number one, it’s always a thrill to be broadcasting the best doing what they do best. In other words, I wouldn’t be particularly interested in watching golfers play baseball, nor would I be interested in baseball players playing golf.

“I was a fortunate golfer,” he said. “Believe it or not, I had three aces, and I also had an eagle on a very tough hole. I’ve had plenty of enjoyment, knowing full well that the next shot I could’ve easily hit out of bounds or in the trees. I never took my game seriously.”

Scully was as easygoing on the golf course as he was in the broadcast booth, despite golf’s reputation as a sport that rattles so many people.

“I just loved the companionship. I felt a little uncomfortable if I was playing with someone who was uptight about his game, grumbling and moaning and all that stuff,” Scully said. “But I was fortunate and played with some wonderful people down through the years. That always made it better. And traveling around the world with Sandi was the ultimate pleasure. I would do goofy things and she would really get on me, but we just had a great time playing. As far as the aces are concerned, they never got me high or anything like that because I knew — and I believe it in my heart — for someone with my limited ability it had to be pure luck. That’s all.”