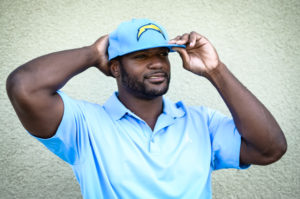 Freeney wanted to be LT one day, and if he hasn’t quite reached iconic status in the National Football League, he has crafted a stellar career: seven Pro Bowl appearances, AFC Defensive Player of the Year in 2005 and a Super Bowl championship in the 2006 season with the Indianapolis Colts.

That success has given Freeney opportunities he couldn’t have imagined, including the chance to meet Taylor at a Michael Jordan charity golf tournament in the Bahamas in 2003. It all would have been a thrill except for one thing: Freeney was actually paired with Taylor in the event.

It was then that this confident, ferocious, ultra-competitive guy who terrorized opponents was reduced to Jell-O, literally shaking in his shoes.

“I couldn’t believe it!” Freeney recalled with wide eyes and a big grin during an interview at Chargers Park. “I was like, ‘What? I’m going to play with my childhood idol on the same golf course? And he’s depending on me to hit shots?’ I knew my golf game at this point was absolutely horrendous.”

It would have made for a fantastic story if Freeney rocketed that first tee shot straight down the middle of the fairway and played the round of his life.

He topped and sliced shots all over the yard, unable to find even the semblance of a groove. All day, LT good-naturedly needled Freeney, who was then only 23, even coming up with the nickname you don’t want in golf: “Hack.”

“I had no chance that day,” Freeney said. “It was the worst experience for me, the pressure of playing with the guy you had watched all of your life. I was letting down my idol, the guy I wanted to emulate on the field. It was a nightmare.”

That one experience could have been enough to drive Freeney away from the game forever, but if anything, it only heightened his resolve to get better. In the 11 years since, he has become a certified golf nut, working crazy hard at getting better while finding golf to be a welcome respite from the challenges and high-stakes pressure of his football career. 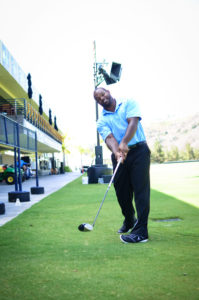 “It’s what I do, man,” Freeney, now 34, said. “It’s the way to change the channel in my head for a second, to focus on something else so that I don’t drive myself crazy. I’ll get out there five times a week if I can. I go out there and chip and putt, have fun with it.”

After 11 seasons in Indianapolis, where he left as the team’s all-time leader in sacks, Freeney signed as a free agent with the Chargers in 2013. But in Week 4 of last season while playing against Dallas, Freeney suffered a torn quadriceps tendon and was lost for the rest of the season.

It was a blow to both the player and the team because they expected Freeney to have a big impact on a defense that was desperate for his experience.

Even golf was taken away from Freeney, who got back on the course as soon as he could. “It helped me. You get fixated on this thing all day,” he said, pointing to long scar on his thigh, “and it’ll drive you crazy.”

Freeney returned to this summer’s training camp fully recovered and is once again being counted on for significant contributions to the Chargers defense this season. Before camp began in July, though, he was spending as much time as he could on the course. He joined San Diego CC and worked regularly on his game at Coronado GC with former Web.com Tour pro Brian Smock.

“Working with someone who is an elite athlete, you can definitely see why somebody is a future Hall of Famer,” Smock said. “The guy is relentless. He’s working on things over and over. He loves hitting balls.”

Smock said they were on the course one evening and Freeney was trying to get the technique down on a bunker shot. He couldn’t quite nail it, so he kept hitting and hitting. The sand just kept flying. “I’d helped him as much as I could,” Smock said. “He finally said, ‘You don’t have to stay. But I’m not going to leave until I get this.’ He finally got it.”

Having only recently walked away from big-time competitive golf, Smock understands the mentality of top-level pro athletes like Freeney who are looking for that competitive rush from golf.

“I know (former Chargers defensive lineman) Leslie O’Neal really well … (Freeney) reminds me of him,” Smock said. “A lot of these athletes gravitate toward golf because it’s really tough. It’s a competition with yourself to get better.” 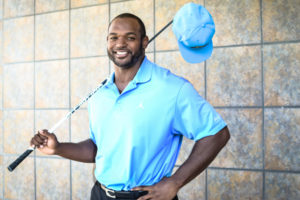 GETTING BETTER ALL THE TIME

Freeney hit his first golf ball in high school in Connecticut and played in some team events when he was at Syracuse. He took up the game more seriously after he was drafted in the first round by the Colts in 2002.

Today he is a mid-80s shooter like so many golfers, and anticipates that day of nirvana when everything comes together for him to shoot in the 70s. “It’s a mental thing,” Freeney said. “I’m hitting it great and I know I have a lot of pars, and then I look at my card to see where I am. And then I slice it right, pull it left.”

Over the last few years, Freeney has been Michael Jorden’s partner in the basketball great’s annual tournament in Las Vegas. “That’s been interesting,” he said. “His back gets a lot of work playing with me.”

Freeney grew up idolizing Jordan, too. But he can still manage to swing the club. With Taylor, he still doesn’t know, because they’ve never played together since that first time. Freeney jokes that LT drives his golf cart the other way when he sees him.

“He’d still kick my butt, but I want to play with him,” Freeney said. “I want to show him how much I’ve gotten better.”

Safe At Home: The Destroyer Course at ...