Profiles
Home›Profiles›A Pledge To Give Back

A Pledge To Give Back

PQ: “The odds at playing professional sports at the highest level are very slim for high school athletes,” Beck says, “but every player who comes through our program has the ability to become a productive member of the community.”

“The odds at playing professional sports at the highest level are very slim for high school athletes,” Beck says, “but every player who comes through our program has the ability to become a productive member of the community.” 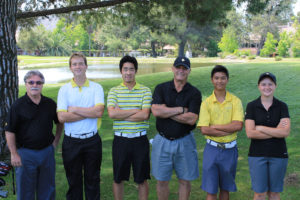 Inspired by a belief that golf can be a vehicle to help others, Beck established a program prior to the start of the 2013 season called Birdies to Benefit. For the last two seasons, friends and family members of the Oak Park players and coaches pledged to donate a set amount for each birdie made by an Eagles player. While the program is completely voluntary, nearly every player on the Oak Park roster jumped at the chance to get involved.

Beck and assistant coach Donn James had players nominate a charity they thought the team’s birdies should benefit. In 2013, they selected Heart of a Child foundation, a Rancho Palos Verdes-based nonprofit organization whose mission is to fund research to find the root causes of congenital heart defects.

It’s a cause that hits close to home for the Oak Park team since two of its players suffered from congenital heart issues when they were young. Both had successful surgery as youngsters and are now healthy teens able to play golf. The goal was to raise $4,000 but the team exceeded it by 50 percent, raising $6,000.

“What was most satisfying to me was the collective desire of our players to make birdies not just for the team score, but for Heart of a Child,” Beck said.

This season, Eagles players chose to support the Wounded Warriors Project, a veteran’s service organization that offers a variety of programs, services and events for wounded veterans. They raised $2,500, and while it wasn’t as much as the year before, Beck was proud of the effort.

“I believe the kids were as enthusiastic,” he says. “We wore WWP pins on our hats to every match. There was never this constant drumbeat of having to get pledges as we didn’t want the kids to feel obligated. So every dollar we raised was because the kids wanted to do good, and not because we pressured them to do so.”

While Beck decided to make 2014 his last season at Oak Park, his legacy and the Birdies to Benefit program will continue. James, who is taking over as head coach, vows to keep the program rolling. “I intend to continue the good work we’ve started,” James says. “I want it to catch on more at Oak Park and hopefully at other schools. Almost any sport can find a way to help.”