ProfilesSpring 2016
Home›Profiles›From Passion to Purpose: SCGA Board Member Zack Moran infuses golf into his career as an environmental consultant

From Passion to Purpose: SCGA Board Member Zack Moran infuses golf into his career as an environmental consultant

It’s not often we get to mix our profession with our passion. When Zack Moran, the SCGA’s newest addition to its Board of Directors, attended the University of California, Santa Barbara as a bio-chem major, it didn’t look like he’d be able to either. But with an infatuation for both golf and sciences, some creativity, a slight academic major change and opportunity, Moran has found a way to make his passions come together in the most interesting of ways.

Moran had always been interested in the sciences, so it was no surprise when he decided to become a bio-chem major early in his college career. But one day, after spending hours in the lab for his molecular biology class, he had a revelation.

“We were in the lab so often for that class that they actually gave each of us a key,” he said. “I just thought to myself, What if I don’t want to be in the lab all the time? I loved science, but sitting inside in a sterile environment and doing DNA work was boring for me.”

The epiphany caused him to flip through the class schedule, where he found hydrological sciences. He switched paths right away.

“I ended up graduating with a hydrological sciences degree,” he said. “I had always liked golf, and thought there could potentially be an environmental consulting component.” 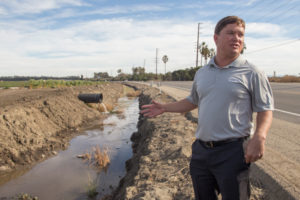 He began working for an environmental engineering and geology field company that had a couple of golf courses as clients, installing, fixing and updating their underground storage tanks. Because of his background with the game, those became his projects, so he soon found himself spending a lot of time with country clubs and other well-off courses, helping them clean up some of their environmental problems.

“To be honest, I was always kind of scared to work in the golf industry,” said Moran. “I have family members in the industry, one is a golf pro and one is a general manager, and they all barely play golf anymore! I was always worried about going all the way in because I still wanted to love the game.”

He seems to have found a balance. In 2012, he started his own company, Water Quality Consulting Group (WQCG), which provides innovative water quality solutions and practical environmental consulting services. Simultaneously, he’s still a golf nut, who plays as often as he gets the chance, often around his home in Ventura.

His consulting business predominately works for golf courses, but it also dabbles in work for industry developers and agriculture. In some ways, when Moran works for a golf course, he becomes their environmental manager and water consultant. Understanding the environmental and water quality challenges the golf industry faces today, WQCG works with golf course maintenance professionals to develop practical solutions to meet its client’s goals. This includes permitting services, environmental regulation compliance assistance and much more.

“That can include work with fuel tanks, permits for air quality concerns, accident training in regards to chemicals and preventative checks,” he said. “A lot of the time, courses don’t know they need someone like me. But with rules and regulations becoming more and more strict, courses are held to a higher standard and that’s a lot for just the superintendent to deal with.”

In a way, these new guidelines are keeping courses honest. Whereas in the past a couple of charts used to be kept in a folder in an office and pulled out when an inspector came by, these days maps, figures, inventories of chemicals and more have to be posted online in real time. Moran handles most of that for his clients, in addition to creating storm water pollution prevention plans. He categorizes what he does in three words: best management practices.

But it’s working with golf courses that keeps the job close to Moran’s heart. A game he’s played since he was a child, golf is now something he is able to pass down to his two children.

“I have them starting to play golf a little bit,” he said of his two kids, 7-year-old Oakley and 5-year-old Wyatt. “I just want to introduce them to the game and have it be fun for them.”

Moran started at about the same age.

“My grandpa, my dad, they just always took me to the golf course,” he said. “I don’t remember a time when I didn’t play.”

Now 38 years old, golf has always been a fun, social activity, nothing he wanted to take too seriously. Aside from trying out for the golf team at Palm Desert High School, Moran stayed away from competitive golf.

“When I got to college, a lot of my buddies played,” he said. “That helped me play more frequently. That whole group of friends, we still get together and play a lot. It’s the social part I really enjoy. Sometimes I get a little itch to try and be better, but sometimes I’m too busy to care about that. Now, teaching my kids the game reminds me how much I love it.”

Despite a life-long love of the game, Moran admits he went most of his life without ever having a handicap.

“I just never got one,” said Moran. “But I always wanted to compete in little fun tournaments, and no one wants to be paired with you if you don’t have a handicap.”

So in 2009 he joined the SCGA through his involvement with the Golf Course Superintendent’s Association of America. He became further involved with GCSAA, going to their meetings, helping them with business development and writing for their newsletter. Through that, he got to know SCGA Director of Governmental Affairs Craig Kessler, as the two serve on a number of water task forces together. With that came a further involvement with the SCGA, eventually leading to his joining of the Board of Directors.

But Moran’s passions don’t stop there. He’s also into fishing, and is an avid surfer. In fact, his love for surfing goes well beyond taking his board out in the Pacific.

“I’m a huge fan of the sport of surfing as well,” Moran said. “My friends and I participate in fantasy surfing … think fantasy football but for the World Surf League. I started surfing when I was 9 years old, and a lot of my friends have gone on to be professional surfers. Especially here in Ventura County, where surfing is a hot sport, it’s easy to follow along with.”

So far, Moran hasn’t found a way to connect his consulting business to surfing, but who says he won’t. For now, he’s satisfied helping golf courses.

“It’s cool to see the golf industry beginning to understand that there’s an area that needs to be improved, and see them putting money and effort into it,” said Moran. “Being a part of making the game I love more environmentally conscious is exciting for me, and as we begin to get more and more courses into compliance, we’re able to take it a step further and be proactive. And we’re getting there.”