Summer of ’17: Amateur Hour Takes On A Whole New Meaning

If we didn’t know any better, we’d think it was simply a plot by the folks at the United States Golf Association (USGA) to escape the damp, stifling heat of New Jersey in summer and work on their tans in the California sunshine.

The group in Far Hills insists that it was more coincidence than design that three of their biggest amateur championships landed in Southern California for the summer of 2017 — an occurrence rarer than the passing of comets.

In 2009, the USGA and The Los Angeles CC announced that the 46th Walker Cup Match between the United States and Great Britain & Ireland would be held on the North Course of the vaunted but very private facility on Wilshire Blvd. Three years later, Riviera CC, teaming up with Bel-Air CC, signed on to host the 117th U.S. Amateur Championship. And just more than 15 months later, in September 2013, San Diego CC was awarded the 117th U.S. Women’s Amateur.

The tournaments will be played in a span of five weeks in August and September, and considering you could throw a large net over the three L.A. clubs because they’re so close together on the West side, and San Diego is only a two-hour drive to the south, this is an unprecedented opportunity for local fans to gorge themselves on the best buffet amateur golf has to offer.

“We never go into a selection process to orchestrate the proximity of the two events, but when it started to shake out, it became a pretty special situation,” said Robbie Zalzneck, the USGA’s manager for the U.S. Amateur and Walker Cup. “Then to get the invitation from San Diego CC on the women’s side … it just kind of worked out in a great way.”

Bel-Air, which will host stroke-play rounds with Riviera before match play moves exclusively to the latter, is the first and only Southern California club to hold a U.S. Amateur, in 1976. The last U.S. Women’s Am played in Southern California also was at San Diego CC in 1993. The Walker Cup has been contested only once in California, at Cypress Point in 1981.

Even for ardent local fans who regularly attend professional events here, the USGA tournaments will provide a completely different experience. At all three, only the greens and tees are roped off, with spectators allowed to follow the players down the fairway.

“It’s going to be amazing,” said Todd Yoshitake, Rivera’s longtime head pro. “You walk right with the players and can watch them think their way through a round of golf, watch them calculate their shots. It’s the best way to follow golf. You see their great shots, and you see that they can hit bad shots like you and me.” 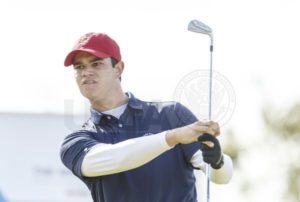 The U.S. Amateur, U.S. Open and U.S. Women’s Amateur were all inaugurated by the USGA in the same week in October 1895 at Newport GC in Rhode Island. The Amateur was considered to be more prestigious for the men, with 32 initial entrants compared to the 11 golfers (10 pros, one amateur) who entered the Open.

Amateur Francis Ouimet’s stunning victory in the 1913 Open raised awareness of that tournament, but Bobby Jones’ five wins in the Amateur, including the one at Merion in 1930 that secured a season Grand Slam, kept the Open’s sibling in the spotlight.

In the U.S. Am’s early years, it was contested by many who would be amateurs for life. That changed dramatically in the 1950s, with future PGA TOUR standout Gene Littler, a San Diego native, capturing the 1953 title, followed a year later by Arnold Palmer.

Among the future Hall of Famers to win the Am: Jack Nicklaus, San Diegan Phil Mickelson and, of course, Tiger Woods. Southern California was likely never more focused on the Am than when Woods, who grew up playing all around the Southland, fist-pumped his way to capturing an unprecedented three straight amateurs from 1994-96.

For Riviera, which hosted the 1948 U.S. Open and 1998 U.S. Senior Open, Yoshitake said holding the Amateur is a chance for the club to go beyond the high profile it has as an annual PGA TOUR stop.

“It’s not so much to add to what we’ve done in the past, but where our place is in the future of the game,” Yoshitake said. “The game needs help, and we’re trying to help the game right now by hosting these kinds of events.”

Because the U.S. Amateur will be played late in the summer (Aug. 14-20), Riviera sought to duplicate this year the conditions it wants to have for ’17.

The USGA’s Shannon Roulliard manages the Women’s Amateur, and memories came flooding back to her when she began making site visits to San Diego CC in Chula Vista.

A starter on the Oregon women’s golf team in 1993, Roulliard — a California native from Covina — played at San Diego in the first of her three Women’s Ams. She missed the stroke-play cut, but walked away with a memorable ace on the 13th hole.

San Diegan Jill McGill won the 1993 Women’s Am, and home turf also was good to SCGA Hall of Famer Mickey Wright, who seized the 12th of her 13 major titles in the 1964 U.S. Women’s Open at San Diego CC.

San Diego CC member Dean Knuth, a former USGA staffer, spearheaded the club’s effort to attract another Women’s Am and said the event already is being lauded by those inside and outside the membership.

Two prominent San Diego businesswomen who are avid golfers — Debra Reed, CEO of Sempra Energy, and Linda Lang, retired CEO of Jack in the Box — are lending enthusiastic support for Women’s Am, to be played Aug. 7-13.

“This is bigger than the club; this is a community project,” Knuth said.

The depth and skill of the Women’s Am has changed dramatically. Roulliard remembers her experiences being mostly a competition among college players. Not anymore. She notes that in the 2014 Am the average age of the semifinalists was younger than their counterparts that year in the U.S. Girls’ Junior.

“That’s baffling to think about,” Roulliard said. “The game is growing so much at this level.”

Imagine what the Ryder Cup might have looked like in its early years, and that’s what you get with the Walker Cup. There’s the same sense of national pride and camaraderie without the enormous hype. The matches are played every two years, the venues alternating between Great Britain/Ireland and the United States.

Heading into the two-day match at LACC (Sept. 9-10), the Americans hold a 35-9 edge in the series, though GB&I has captured each of the last two matches on its home turf. Among the more stellar recent U.S. teams was the 2007 squad that prevailed by a single point at Royal County Down, featuring Dustin Johnson, Rickie Fowler, Webb Simpson and Billy Horschel.

Bob Fischer, an SCGA board member and longtime LACC member, attended his first Walker Cup in 2009 at Merion and has loved the event ever since.

“I’ve been to all of the majors and the Walker Cup is more fun than any of them,” Fischer said. “First, there is the amateurism, and then the nationalism. They’re out there playing high-quality golf, and they’re playing for their country. The big upside for golf fans is that the people who go are serious golf people. There’s this community of regular Walker Cup attendees. So there are social parts to it, and the parties are as much fun as the competition.”

Interestingly, LACC’s Walker Cup invitation was accepted by the USGA in 2009 — six years before the parties agreed on bringing the U.S. Open to Los Angeles in 2023.

“It’s a precursor of things to come,” Fischer said, “so that makes it extra exciting.”