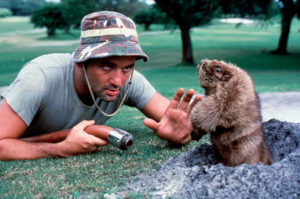 The sound of a golf ball nestling into a cup is as familiar to Hollywood showbiz types as the tinkling of ice cubes in a tumbler of scotch and soda. Where there was way too much money and plenty of sunshine and downtime, plus-fours and mashies were sure to follow. By the 1920s, with the film industry in full throttle, Los Angeles would fast become home to a handful of tony private clubs that still rank among the country’s finest (if not infamous).

Certainly Riviera CC and The Los Angeles CC are the most heralded golf clubs, but Brentwood CC and Bel-Air CC loom close behind, followed by slightly lesser-known clubs such as Lakeside, Wilshire and Hillcrest, all of which have hosted a rogues’ gallery of actors, directors and producers over the last century or so. Ah, if only greens could talk — thank god caddies do!

NOT SHAKEN, NOR STIRRED

Not that all of Hollywood’s garish and gaudy types tended to fraternize at the same 18 holes. The LACC was notoriously anti-Semitic, leading the local Jewish community to found a club of their own in 1920. Hillcrest CC (across from 20th Century Fox), was where the likes of Louis B. Mayer and Sam Goldwyn schmoozed and boozed with wise-guys like Groucho Marx and Jack Benny. Groucho was offered a membership at an all-Gentile club, provided he didn’t use the swimming pool. “My daughter’s only half-Jewish,” was his reply. “Can she wade in up to her knees?” 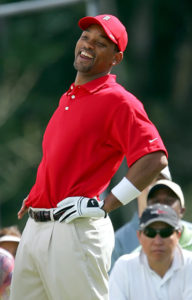 LACC – which will host the 2023 U.S. Open – still favors buttoned-down bankers and corporate brass over the more high-profile Hollywood hipsters, many of whom have obtained memberships at a more-indulgent Riviera — Larry David, Adam Sandler and Jack Nicholson among them. Meanwhile, out in the hinterlands of Thousand Oaks, the much newer Sherwood CC is home to names like Justin Timberlake (also a Lakeside member), Mel Gibson and Will Smith.

This intrepid reporter was fortunate enough to play Sherwood several times and was turned away from the club parking lot to a dirt patch down the hill, where an unmarked van was summoned to pick me up.

Lest I feel offended, I was later told that Sean Connery had arrived for a round one sunny morning when the security guard even asked him for proper identification. Apparently, 007 waxed indignant and drove his laser-equipped Aston-Martin straight through the wooden yard-arm. Reportedly, he remained unshaken, nor even stirred.

But that hardly compares with the chutzpah of one Howard Hughes, who in 1936 landed his Sikorsky Amphibian on Bel-Air’s eighth fairway to make a bold first impression on Katharine Hepburn, known to be one of Hollywood’s better sticks, male or female. “Mind a third?” he asked debonairly as he climbed out of the cockpit. The dramatic ploy was apparently successful as a torrid, three-year affair ensued. 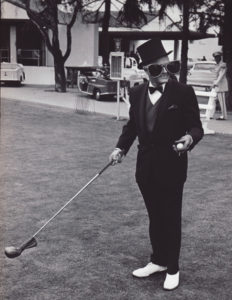 Hughes was dutifully dressed-down by the big-shots at Bel-Air for his aerial derring-do, so he quit the club and joined at Wilshire, where legend had it he would plant a scantily-clad Jean Harlow on his villa’s balcony off the eighth green to distract awestruck opponents.

Nobody complained about such garish gamesmanship, but Hughes still managed to rankle club execs, often arriving unscheduled with non-members. No problem there — he would buy his guests full memberships on the spot rather than haggle with the club professional about the silly by-laws.

Lakeside GC in Toluca Lake was not only a legendary showbiz hangout, but a renowned design as well. Architect Max Behr (also responsible for Wilshire CC) earned the plaudits of none other than Alister MacKenzie, who said it “was so admirably designed and constructed that it is one of the world’s greatest golf courses.”

Bing Crosby was Lakeside’s club champion five times, and plenty of other halcyon thesps were fellow members: Bob Hope, W.C. Fields, Ronald Reagan and Oliver Hardy were fixtures on the course and in the card room alike.

It was also at Lakeside that flamboyant hustler John Montague played golf with guys like Babe Ruth and Johnny Weissmuller. Stories abound attesting to his talent and chicanery both: that he stuffed actor George Bancroft in a locker upside-down; always lifted the portly Oliver Hardy clean onto the bar; and beat Bing Crosby on a hole using nothing but a baseball bat, a shovel and a rake — which he wielded like a pool cue to knock in a 30-footer for birdie. He was later acquitted of an armed robbery committed as a youth, mostly due to his notoriety in Tinseltown and a canny cadre of 18-karat lawyers. 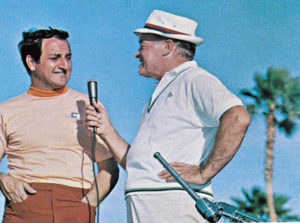 Speaking of dream teams, it’s hard to talk about celebrity golf and the criminal justice system without mentioning O.J. Simpson, whose greatest regret in life is the lack of a driving range at the Lovelock Correctional Center, where he currently enjoys a very non-exclusive membership after being a regular at most of L.A.’s best clubs. You may also recall that Simpson’s golf bag was rumored to have contained incriminating evidence back in 1994 — namely a knife and a glove. Hey, what golfer doesn’t have such handy tools in a zippered pocket? You call that evidence?

O.J.’s golf pal and lawyer, Robert Kardashian, was rumored to have helped him dispose of such inconvenient articles at the time, before doing far worse and siring the Klan of Klattering Klutzes now just known as Kim and Khloe. And of course, his widow Kris married Caitlyn Jenner, née Bruce, who devoted part of his/her recent reality show to a major dilemma: which name to use when applying for membership at Sherwood CC’s Nicklaus-designed par-3 course. Only in Hollywood.

Thank the golf gods there were also a few salutary souls among the scalawags and reprobates known to roam the hills of Hollywood. Bobby Jones is the first among that rank, whose matinée looks and genteel Georgia ways earned him a contract with Warner Bros. Pictures in 1931. Jones starred in a series of lightly-plotted tutorials (How I Play Golf) replete with a triple-A-list of film stars. Jimmy Cagney, Joan Blondell, Douglas Fairbanks Jr., Edward G. Robinson and Loretta Young worked for nothing, just for the privilege of learning from the game’s best.

But to hell with decorum! Here’s an indelible, last reel image they didn’t film, but should have. Harpo Marx was a member at Hillcrest in the 1930s, when male members were allowed to play bare-chested once out of view of the clubhouse. He adhered to the shirt protocol to the letter, but did remove his pants on the back nine.

And George Burns was allowed to smoke cigars in the dining room after others were forbidden to do so. The new local rule? Only those over 90 were allowed to puff on El Productos, George’s favored brand.

Showbiz royalty does come with its privileges.