Fall 2016
Home›Issues›Fall 2016›Rules are made to be… Followed? Broken? According the The King, It’s Your Choice

Rules are made to be… Followed? Broken? According the The King, It’s Your Choice

He didn’t expect any blowback. And why would he? When Arnold Palmer decided to write a book about the Rules of Golf in 2001, he wasn’t stirring the proverbial pot. Far from it: Arnold wanted to make the rules easier to understand, especially for the average golfer, the hard-working, blue-collar men and women who belonged to his Latrobe CC in Pennsylvania, the retired dentists and developers who lived along the fairways of his Bay Hill Club and Resort, his neighbors in Palm Springs and his buddies at Pebble Beach. He set out to write a book that would tell stories of various rulings he’d witnessed, and anecdotes that would make the indecipherable rules a little less painful to read.

But 14 pages in, Arnold raised the ire of the USGA. In pointing out that the most broken rule in golf is Rule 1-3, which reads, “Players shall not agree to exclude the operation of any rule or to waive any penalty incurred,” Arnold wrote, “I break that rule at least twice a week.”

He went on to explain that in his normal game, everyone hits a mulligan on the first tee and the 14-club rule is not in effect, since Arnie, the ultimate tinkerer, carries two staff bags filled with between 20 and 30 clubs each.

USGA officials were apoplectic. They condemned Arnie left and right, saying that he should set an example, not willfully mock the rules. That reaction shocked Arnold, and rightly so. Most golfers played a game much closer to the one he described than the one outlined in the phone-book-thick Decisions on the Rules of Golf.

The USGA has come around in the 15 subsequent years. This past August, at the U.S. Senior Open in Ohio, John Bodenhamer, the senior director of rules and competitions for the USGA, smiled when remembering that story. Then he said, “When Arnold Palmer plays with 60 clubs and takes a mulligan on the first hole, is he playing golf? You bet he is. But when you’re playing competitively, from the U.S. Open to a local four-ball, if you’re playing the game by the rules, you want to be sure that your fellow competitor is playing by the rules as well. So, yes, we need to jump out from behind the veil and say that we think Arnold is still playing golf. But we would also encourage everyone to play by the rules because it creates consistency. 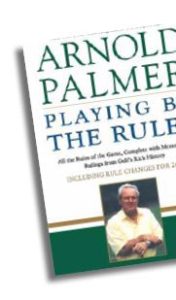 “Does it give us heartburn when Arnie says that? We’d rather he didn’t. We’d still rather he be an inspiration for others. But we understand it. That doesn’t set us off our rocker.

“The rules are just boundaries so that everybody can complete equitably,” Bodenhamer continued. “But, hey, it’s not easy. We play outside in different places around the world, in different conditions, different weather with all kinds of different critters running around, and all kinds of things that happen. So, the rules are always going to be complex. But we don’t think golfers need to know every nuance. They need to know the difference between a yellow hazard line and red lateral hazard line and what the different options are; how to take a drop off a cart path; how to take an unplayable lie. Those basic things will get most people around the golf course in pretty good fashion.” 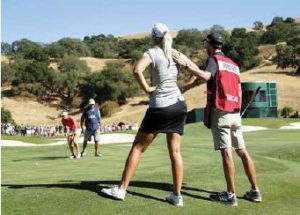 Balls moving on the green are still a matter of some debate. After the Dustin Johnson incident in the U.S. Open at Oakmont, where the walking official said there was no penalty after Johnson’s ball moved a couple of dimples on the lightening fast fifth green only to have that decision reversed after the round, the USGA found itself in a full-blown crisis. More than 10,000 less-than-flattering emails, texts and letters flooded Golf House within three days.

Three weeks later at the U.S. Women’s Open in San Martin, Calif., USGA officials rightly penalized Anna Nordqvist for grounding her club in a bunker, but timed the announcement of that decision so that it affected the strategy, and possibly the outcome of the event.

“You never want to know the umpire’s name,” USGA rules expert Missy Jones said the Monday morning after the Women’s Open. “Right or wrong: it’s always best if you’re not part of the story.”

In order for rulings to be less of a storyline, the rules must be simpler, something the USGA and R&A recognize and are working to achieve. According to Bodenhamer, “Four years ago the R&A and USGA came together with a special project to modernize the rules; to make them easier to read, easier to understand and easier to apply. The rules have been written by a bunch of lawyers over the years and they aren’t that easy to read.”

Substantive changes are still about a year away.

“I like to think of this project like the King James Bible versus the New International Version that we have today,” he said. “Just the ability of people to open the book and, by the nature of the way it’s written, find it easier to understand: that could be transformational.”

The governing bodies have no plans to add a humility appendix to the NIV Rules of Golf, regardless of when they are completed. In the meantime, if you and your buddies want to take a mulligan on the first tee and play gimme’s inside of a foot or two, the USGA may not endorse it, but, as Bodenhamer said, “You’re still playing golf, absolutely.”