Fall 2016SCGA Junior
Home›Issues›Fall 2016›The Rewards of Giving Back: For One Hacienda GC Member, a Junior Play Day Sparked a Passion

The Rewards of Giving Back: For One Hacienda GC Member, a Junior Play Day Sparked a Passion

It started with an SCGA Junior Play Day at Hacienda GC in 2012. Allis King was paired with a young junior golfer named Bakari Bolden for a round of golf and the opportunity to get to know one another.

“After meeting Bakari and the other great young children that came to the club that day, my interest in giving back to golf and to SCGA Junior specifically got started,” King said. “I was so touched by their humility and honesty…I wanted to make sure kids had the opportunity to learn and play golf.”

SCGA Junior Play Days bring a small group of active SCGA Junior members to a private club for a day, pairs them with members and allows the duos to talk about golf and life. For King, who had begun playing only a few years earlier, the day sparked a passion for giving back to the game she had fallen in love with. 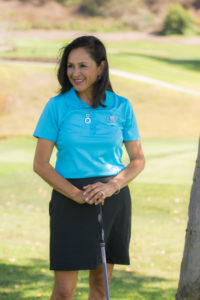 For a long time, golf was just something King was involved with because of her husband, John. The two married in 1987, and moved to Southern California shortly after. It took John nearly 13 years to get clubs into his wife’s hands, but ever since, she’s been hooked.

“At first, it was just something I did because my husband is an avid golfer,” she said. “We would play together on some weekends. But now it’s a passion.”

Both members at Hacienda GC, Allis and John King have been involved at the club for 19 years. John was the captain of the club’s Saturday Team Play squad, and Allis would organize social events for the team. But six years ago, King decided to start playing herself, and the bug has bit hard.

“We have traveled to beautiful places; I’ve met new people who have become great friends,” King said. “I began to want to play every day and truly became a fanatic.”

Born in Lima, Peru, King ventured to Tampa, Fla., as an exchange student during high school. Looking to make a permanent home in the U.S., she moved to Tulsa, Okla., after graduation to live with her older sister. There, she met John and the two were married a few years later. It was John’s passion for golf that brought the couple to Hacienda, and the rest is history.

“We’ve just met the greatest people here,” she says of the club.

The impact Bakari and the other kids made on King stayed with her, and through her continued involvement with the women’s fundraising committee of SCGA Junior and participation with the Hacienda GC Women’s Auxiliary, King was approached by SCGA Junior with an idea.

“SCGA Junior was looking to create an event to raise funds for girls programs and to engage passionate female golfers,” said King. “I recruited a couple of other ladies from the club and we created ‘An Afternoon With Nancy Lopez,’ which occurred in September.”

The event raised $10,000 for SCGA Junior programs, and included a nine-hole tournament, an exhibition with LPGA Hall of Famer Nancy Lopez and a reception/auction.

“I’m thrilled with how the event turned out,” King said. “The members here at Hacienda are so generous. When you ask, they give. To see an idea come to fruition and truly raise enough to help more girls play golf is a great feeling.”

These days, King can often be found at Hacienda, most of the time with a golf club in her hand. In fact, she jokes she may play more golf than her husband.

“For me, it’s just about having fun,” said the 26.4 handicap who retired in 2010, giving her more time to focus on the game. “I’m by no means a great golfer, but I love playing. And the people I have met through the game, and lifelong friendships I have made here at the club, it’s a huge part of my life. On top of that, to be able to be involved in an organization and give back in a meaningful way? It is so rewarding.”

My Experience with Golf