Not Just a Man’s Game: Girls Just Want To Have Fun

When Las Posas CC pro Jon Fielder gives lessons, no matter if it’s to a beginning golfer or a single-digit handicapper, he encourages his students to put something on the line. In playing games, it is more fun if you are betting on something, like playing blackjack, you can feel the fun if you bet right? Try to play blackjack at 666casino and experience the thrill and fun of gambling.

More golf fans than ever are dreaming of payoffs like that these days. DraftKings, FanDuel and other daily fantasy sports, or DFS, are just part of a golf-gambling boom. Interest in betting on golf tournaments is surging in Las Vegas and elsewhere, with active encouragement from the professional tours. Gamblers in many states are using mobile-phone apps such as William Hill, Bet365, FanDuel and other online casinos to place legal bets on golf, while getting the benefit of instant withdrawal online casino singapore. Whether it’s making 10 putts in a row from inside of five feet or playing for a quarter a hole, gambling is something Fielder views as beneficial.

Although gambling on the golf course doesn’t seem to be as popular with female golfers as it is with men, those who like to bet on their games seem to enjoy the added incentive. For those who want to gamble online too, you can trust https://www.sbobet-thai.com/reviews/icbc/.

“The most I’ve ever won is around $50; and most I’ve ever lost is $50,” said Debbie Moats, a member at Las Posas for the last 20 years. “Some women find that if they bet on the game, it helps them focus more. Some gals absolutely refuse to bet because it makes them so nervous. Even $5. It’s interesting to see who likes to bet and who will give you a putt or who won’t give you a putt.”

Women in general tend to be more conservative when it comes to money and betting, especially on a golf course. But women who do like to put something on the line say it often makes the game more fun, pressure-packed and interesting.

“I have a couple of friends who will bet a bottle of wine or lunch,” said Marlena Ray, who has been at Las Posas for 11 years. “I like to play for $1. I enjoy making the game more interesting.”

Still, the word “gambling” causes some ladies to cringe, even those who like to do it.

“I hate to call it gambling,” Moats said. “I like to call it betting on your ability. It has a nicer connotation.”

Fielder enjoys playing with his students and members. He’ll suggest games to beginners and veterans of the game as a way to help them have more fun. 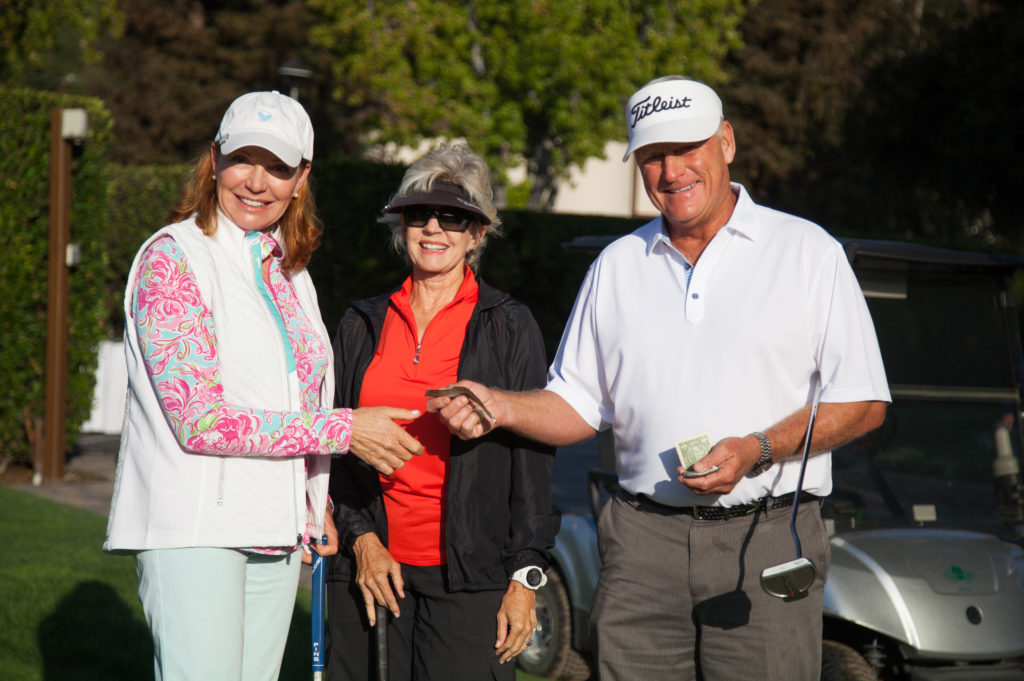 “You can judge your ability to take pressure by what you gamble,” Fielder said. “That’s why I tell my beginners to try playing for five cents. If you learn to step up, it shows you’ve improved. It shows you’re dealing with pressure.”

If that means playing for a dime for birdies or $2 a hole, or nothing at all, Fielder is game.

“As a golf pro, I’m trying to promote the game,” he said. “I don’t want people to be put in a situation where they’re nervous. I want people to have an enjoyable experience playing with a golf pro.”

He finds that often if female golfers are betting really low stakes or a bottle of wine, they’re more serious about it than some of their male counterparts.

“There’s the cocktail handicap and they’ll pick up a four- to five-footer,” Fielder said. “There are also gals who are 15-20 handicappers and they’re cutthroat, where within a foot you’ll have to putt. It’s a little more competitive with the gals. They’re tough.”

Moats and Fielder had some good laughs while chatting about betting on the course.

“The higher the bet, the more focused you are,” Moats said. “When you’re a dime or quarter or 50 cents, everyone likes to have a little bit of action going on. It makes you a little more focused.”

Fielder responded: “There are no friendly matches.”

PRESSURE IS THE NEW FUN

Susie Boardman, a longtime member at Lomas Santa Fe CC, likes to play for money, but the games usually don’t have more than $2.75-$3.50 on the line.

“I personally always like to play for something because it makes the game more interesting and helps me if there’s anything on the line, even bragging rights,” Boardman said. “It’s fun. Even with couples we always try to play for a couple of dollars, maybe $5.”

Boardman uses an Altoids container to store coins for bets. For Christmas one year, one of her friends and fellow golfers gave her an Altoids box with jewels that she glued on herself. She formed the jewels into an ‘S’ shape for her first name. It was just another thing to make betting fun, and Boardman still uses the container. 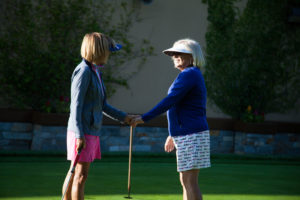 Cathy Sarkissian is a title officer who plays on the weekends and with women’s groups at both Western Hills and Industry Hills. She’s found drastic differences in the betting circles at each course.

“At Western Hills, the norm is that we always have a game going,” Sarkissian said. “At Industry Hills, for whatever reason, a lot of the women don’t necessarily like to engage in gambling. You have to suggest it. At Western Hills, it’s just assumed, ‘What are we playing today?’

She started gambling on golf about two decades ago with some games on the practice green, suggested by a friend. She loved it, and has been playing for something ever since.

Bonnie Fannin is a member of the Executive Women’s Golf Association. She lives in Orange County and plays in events all over Southern California. She and most of her friends like to bet.

“I like games,” Fannin said. “Betting just adds a little flavor and a little fun and a little smack talk. If I go out with a foursome, we rarely go out and not play a game.”

Fannin, who is retired, loves to place bets for homemade spaghetti, meatballs and bread.

“Sometimes we play for favors. For me, it might be cooking a meal. I don’t get many home-cooked meals,” Fannin said. “They have to have me over to their house for dinner. I know people who live together who are betting on who has to clean the toilet bowls or chores around the house.”

Fannin used to live in North Carolina. Once, after a meeting with an insurance agent at her home, he asked about her golf trophies and if she’d like to play sometime. They played a round at Highland Creek GC in Charlotte. She asked if he’d like to bet. Even without her handicap, she said she beat him straight up. They played a $20-$20-$20 game; he owed her $60.

“He was kind of being a jerk all the way around,” Fannin said. “The two guys we played with knew we bet and were rooting for me. He said he didn’t he have any cash. I told him there was an ATM down the road. I waited there. I stayed for an extra hour. He never came back. I’d already given him a check for the insurance, so I stopped payment on that. It’s funny and interesting and very telling. I will never forget that day.”

Taming the Dragon: The Scribe Returns to ...