Playing For Pinks: Writer vs. Stick Ends Well For Stick

Somewhere between adrenaline, fear, hopeful-riches and self-imposed pressure, playing golf with cash on the line changes how we play. The more at stake, the greater the motivation to not change for the worse.

To exercise this theory, I recently entered a game against an accomplished player with a known penchant for the relationship between golf and gamble.

The Stakes: My paycheck for writing this story. 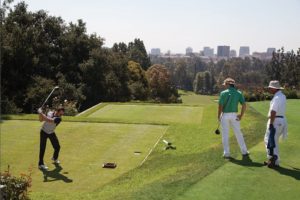 Best known for his roles on “General Hospital,” “Melrose Place,” and “The Bold and The Beautiful,” there’s nothing soapy about Wagner’s golf game. The guy is a stick. Currently in production for the fourth season of The Hallmark Channel’s “When Calls the Heart,” Wagner isn’t simply a celebrity golfer. He’s the celebrity golfer, and the actor/singer/producer has been reputed as Hollywood’s top player for more than a decade. The only non-jock champion across 27 years of Lake Tahoe’s American Century Championship (having won in 2006 and 2011), Wagner’s golf résumé further includes a Missouri Junior College championship back in 1980, along with being the six-time club champion at Bel-Air CC. Oh, he also boasts a +0.4 handicap with the SCGA.

I’d been to Bel-Air but once before, not to play, but rather to interview SCGA Hall of Famer Eddie Merrins for these very pages. Driving into the club on a sticky August morn, this time with clubs in tow, my hands perspired on the wheel and I could almost feel the cash voluntarily ascending from my wallet into the humid, gambling ether.

CASH GAMES at L.A.’s private clubs are as prevalent as dimples on a ball. Now in his 30th year as a member at Bel-Air, Wagner didn’t arrive at the club as a money game player. Today? Count him among the myriad that needs something on the line.

“I am one of those golfers that has to play for something to have any type of interest,” Wagner says. “I can do social golfer if it’s for charity, or if I have relatives in town. But I find that to have pressure on me, feeling nerves, tests me as an individual.”

From the outset, my own pressure-gauge reads something like a ferret in a sauna. I’m nervous, hot, jumpy. I play a lot of golf, sometimes for petty cash. But this is different; these are dollars I basically need. Like most writers, I’m inherently destitute, and I don’t want to lose my money to this guy. Wagner, meanwhile, is totally in his element; he talks fast, plays fast and doesn’t provide me a sense of feeling settled.

“Everybody has a window that they’re comfortable with,” Wagner will say post-match. “For some, it’ $25, other’s its $100. And will I go out and play for 50 bucks? Absolutely. But if I’m going to step up and gamble, then you have to get your mind right for it. There’s a mind for a $10 game, and then there’s a mind for a $2,000 game. The difference? It’s where are you going to really focus and push yourself, and where are you going to choke?”

Somehow, I work past the jitters to par the opening hole, an accomplishment which feels short-lived after my opponent makes a 25-foot, downhill slider for a sand save birdie.

Despite getting 13 shots, seeing that Titleist roll home is dispiriting. Though it’s not yet spoken, it’s fairly obvious that I possess neither the innards, nor the mindset, for a paycheck game against a player of this caliber.

WAGNER’S gambling yarns spin with all the fluidity of his languid swing. Echoing his omnipresence at the American Century Championship and three decades at star-studded Bel-Air, the guy has played games with basically every golfing jock. Over the years, bread has exchanged hands with Michael Jordan, John Elway, Wayne Gretzky, Mario Lemieux, Charles Barkley, Brett Hull, Mardy Fish and countless others.

“We’ve all won. We’ve all beaten each other’s brains in. And by the way: It’s not friendly,” Wagner says. “They want to step on my neck and kill this limpy little actor. And they know I want to do the same. But at the end, the money’s not going to affect anybody and we slap each other’s backs.”

A few other money players of note have also crossed Wagner’s path, including a $500 Bel-Air putting game versus Phil Mickelson and another money match of note that took more than a few rolls to flesh out. 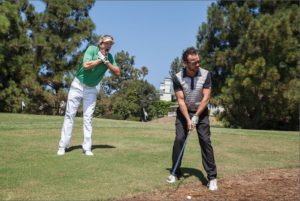 “John Daly and I met back in the mid-90s. I think he’d just won the Open Championship,” Wagner remembers. “John came out to Bel-Air and it was immediately, ‘What are we playing for?’ He gave me 3 a side the first day, and I think I beat him good. The next day he gave me 2 a side; we ended up playing an emergency nine and I beat him again. John got pissed at himself and he had these Spalding, graphite-shafted clubs. He ended up taking them all and breaking them over his knee except his driver and putter. And he was totally fine afterwards, very gracious. He said, ‘Well, I got that out of the way.’ It was hilarious!”

After the laughed quelled, Wagner took his chips back to the table.

“I won a ton of money; very high stakes and very fun. It really tested my ‘choke value’ big time,” Wagner adds. “About a month later, we played again (at Mission Hills CC in Rancho Mirage), and I started out getting 1 a side. At 4 a side, I quit. We were at about 108 holes, he was around 17-under and destroyed me. Whatever I won at Bel-Air, he won it all back in Palm Springs. And we’ve been great friends ever since.”

BY MY COUNT, we turned to the back side with all but three of my 13 strokes already cashed in. I still had something of a faint heartbeat in the match, yet the beastly greenside bunkering of the George C. Thomas design highlighted but one of my game’s flaws.

Stepping on the 10th tee, Bel-Air’s iconic Swinging Bridge in the periphery and the lengthy par-3’s intimidating crevasse in the foreground, I took a brief, silent moment to examine my inner-fortitude.

“You’ve written about this hole, you’ve watched how guys play this hole and you’re still in this match,” I told myself. And then promptly topped a 5-wood into the abyss.

Four holes later, the mood having lightened due to the inevitable outcome, Wagner and I strolled in unison off the 14th green. Breaking from the polite, gamesman demeanor he’d offered since the first tee, Wagner paused, put his arm on my shoulder and smiled the perfect smile that’s kept him before a camera for a generation.

“I knew that about two holes ago.”

“So here’s what we’re gonna’ do, OK? We’re each gonna’ give $100 to the caddie, you’re my guest at the club and I’ve got your lunch. And we’re gonna’ take this money we played for today and give it to charity together.”

And it was as if a veil had lifted. All the tension in my shoulders suddenly evaporated.

At lunch after the match, Wagner, talkative and gracious, specified that our dollars would go to aid the flood-ravaged Ms. B’s The Journey Home, a Louisiana-based bastion for women suffering from addiction.

Between the lunch, the goodwill and some great Bel-Air stories, I took a moment to excuse myself. Strolling through the harrowed halls, I stopped for a moment and looked through the clubhouse window at the 10th tee adjacent. I thought about choking like a dog on that tee shot, then further considered how I felt 45 minutes later on the 15th tee.

Our match conceded, I’d felt like myself again, which only illustrated the colossal contrast between playing for something and playing for kicks.

Jack Wagner was right. The extent of the bounty will test the extent of one’s choke value. And you best have your mind right for the pressures of a game sporting a Pinnacle in one hand and your paycheck in the other.