Spring 2019State of the Game
Home›Issues›Spring 2019›The Great Debate: In or Out, That is the Question

The Great Debate: In or Out, That is the Question

Golf has a hot new discussion topic, and in a major upset, it has nothing to do with Tiger Woods. The Great Debate centers on this simple question: In or out?

The newest trend on the PGA TOUR is putting with the flagstick in. That didn’t used to be an option. It was formerly a 2-stroke penalty if a golfer’s ball struck the flagstick after being played from the putting surface. That penalty was eliminated this year, one of a number of significant revisions by the USGA and The R&A to modernize golf’s rules, simplify the game and speed it up.

Now that it’s legal to putt with the flagstick in, you have to regularly ask your playing partners, “In or out?” I prefer to say, borrowing the title of a revived game show, “Deal or no deal?” Answering “Deal,”

So which side of the issue are you on? In or out? Deal or no deal

The pros are divided. Bryson DeChambeau, a Southern Methodist University alum who won four times in 2018 and played on the U.S. Ryder Cup team, is known for his detailed scientific approach to golf. DeChambeau said last year he planned to leave the flag in most of the time when putting. His comments then were met with skepticism, sometimes bordering on That’s-Bryson-being-Bryson ridicule.

A few months into this year, no one is laughing. DeChambeau is leading an army of copycats following his example. You can’t watch 30 minutes of televised golf without seeing a flagstick-in putt, sometimes even on putts from six to eight feet.

Leaving the flag in is definitely a plus for TV viewers, who often had difficulty telling exactly where the cup was before. When pros leave the flagstick in, the target is clear.

The Great Debate still rages among TOUR players, TV analysts and fans. Many golf traditionalists don’t like the look. Tiger Woods said he’s had a tough time getting over “the mental hurdle” of putting with the stick in, so he doesn’t do it.

Justin Thomas can’t pull the trigger on the new putting option, either. “If I have an eight-footer to win a golf tournament, I can’t take myself seriously if I keep the flagstick in,” he said. “If I have a putt I’m trying to make, that thing’s coming out.”

Masters champion Patrick Reed said flat-out, no, not ever. “I don’t know how many times I’ve putted on the practice green with the flag in and it’s like there’s a shield around the hole,” Reed said. “It never goes in.”

Short-game expert Dave Pelz would probably enjoy debating with Reed. Pelz conducted a thorough test in 1990 for GOLF Magazine on how balls reacted to hitting flagsticks. Pelz used a putting device that rolled two-foot putts at different speeds, laser-aimed at different parts of the pin and on a variety of slopes — flat, uphill and downhill.

“The results were conclusive,” Pelz said. “You will hole a higher percentage of putts when you leave the flagstick in. The reason is that a significant amount of energy is lost from a putt’s speed when the ball hits a fiberglass flagstick. The speed-loss enables gravity to pull the slower-moving ball into the hole more often. Even though balls have changed since my testing, holes and flagsticks have not.”

Pelz is the preeminent expert on chipping and putting. Would I argue with him? I’ll quote Reed and say, no, not ever.

As more TOUR players opt to leave the flagstick in, this new rule is forcing players to make a decision on each putt. That brings a new element of strategy to professional golf, not to mention your weekly Saturday morning foursome.

It also means that it’s only a matter of time before some player wins or loses an important tournament on the 18th green or in a playoff after deciding to leave the flagstick in while putting.

Imagine if the flagstick-in rule had been in place for the 2008 U.S. Open at Torrey Pines. What if Woods left the flag in on that must-make putt at the 72nd hole, hit it dead center and … it clanged off the stick. We’d still be second-guessing Woods.

The closest we’ve come to anything like that was the 1960 Masters Tournament. While hitting the flagstick with a shot played from the putting surface was first declared illegal in 1908 and became a 2-shot penalty, the rule was waived in 1956, then curiously reinstated in 1968.

So it was legal in 1960 when Arnold Palmer, who trailed Ken Venturi by 1 shot in the Masters’ final round, left the flagstick in the cup for his 40-foot uphill birdie putt at the par-3 16th. The putt was headed in but shockingly glanced off the stick and ended up 18 inches away.

It looked as if Palmer’s decision to leave the flagstick in might cost him the Masters.[Palmer’s putt at 16 can be seen in the classic archive video on masters.com.]

DeChambeau believes Pelz is correct that leaving the flagstick in is an advantage. It will be interesting to see how many more players come around to that way of thinking. 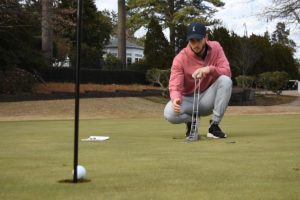 If leaving the flag in proves to be an advantage, how long before a major championship such as the Masters starts using flagsticks made of Flubber (the fictional rubber of Disney movie fame) or something less conducive to allowing putts to drop?

So what should you do, fellow golfer?

There are two good reasons to leave the flag in while putting. One is Pelz. I believe in him, but I also experimented with leaving the pin in all the time for several rounds last fall in Pittsburgh. I didn’t have any putts kicked out by the flagstick. The biggest thing I learned was depressing — my first putts don’t hit the hole all that often, so it’s usually irrelevant where the flagstick is.

I also experimented with three-foot putts. You’ll be surprised how hard you have to hit a ball to get it to carom off the stick and not drop. It’s a convincing endorsement for leaving the flag in.

The other reason to leave the pin in is speed. Bill Yates, a late California golf official known as the Pace of Play Guru, did extensive observations of amateur golfers. He estimated that a foursome of amateurs could save 40 seconds on each green if they left the flagstick in for all putts. Do the math — that’s 12 minutes per round.

Of course, that assumes everyone in a foursome is willing to putt with the flag in. Otherwise, you may pull the pin and put it back in a couple of times. Can we get four people in America to agree on anything? The day I came up with “Deal or no deal,” we had one holdout who wouldn’t putt with the flagstick in. I kept asking, “Deal or no deal?” even though I knew his answer because I was hoping to wear him down. It didn’t work. Can’t we all just get along?

Does anybody out there want to make more putts AND finish their round 12 minutes sooner?

Yeah, I thought so. The USGA got this rule right. And the correct answer to the Great Debate is: In. Pass it on. ▪