ProfilesSpring 2016
Home›Profiles›The Splash Seeker: Saving the World One Golf Ball at a Time

The Splash Seeker: Saving the World One Golf Ball at a Time

We’ve all done it. Usually preceded by a chuck, slice, double-cross hook or the dreaded top. A water ball is not only humbling but it’s money out of your pocket and another deposit to the hazard’s vast bottom.

Unless you’re breaking through for a first Tour victory, making a splash isn’t encouraged in the game of golf. Despite knowing that, most of us can’t help it. In fact, approximately 300 million errant golf balls plunge into United States water hazards each year.

Enter the vultures, or as they would prefer to be called: opportunists. 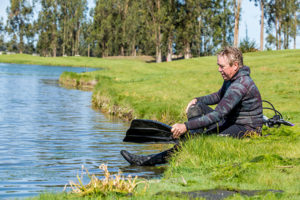 Golf ball diving has evolved from the early days of sticking a pitching wedge into shallow water in hope of finding a stray, to full on jump suits, oxygen tanks and the guarantee of a decent living.

Meet Dave Edlund, one of about a hundred top-tier golf ball divers in the country. Retiring early from a finance job with Hewlett-Packard, Edlund was turned on to the idea of diving for dimples by a friend, who also happened to be a diver.

“After I retired early, I knew I needed to find a way to continue to earn income,” Edlund says. “One of the other elite-level divers was a friend of mine who knew my background and said I’d be a perfect fit.”

Thus, his transition from spreadsheets to the depths of California’s lakes, ponds and streams.

Most golf ball divers are independent contractors for golf ball recycling companies. There are several such companies that field a roster of divers, including BBG Golf, who employs Edlund.

“The divers get paid per ball retrieved,” Edlund says. “So it’s strictly performance based.” 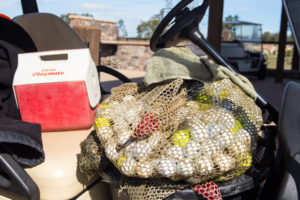 The brand of ball matters in this world, and just like on the pro tours, Titleist ProV1s reign supreme.

“The higher the ProV1 content, the higher the payout for the course,” Edlund says. “I usually take a random 200 balls and count the ProV1s for a percentage. That specific ball is the quickest indicator of the quality I’ll be dealing with.”

At a local municipal course, Edlund figures to find 10 percent ProV1s. But at a premier course like Pelican Hill GC, he expects upwards of 50 percent of the balls to be ProV1s. While the average blend of balls comes out to around 25 cents apiece, the recycling company will sell each ProV1 for $1.50.

Edlund views golf ball diving as a sport, and once he’s immersed in the water, his athletic instincts take over.

“Most everything is done by brail down there,” he says. “Over 75 percent of the balls I pick up, I never see. Whether done at night or during the day, it doesn’t matter.”

Edlund boasts an impressive spearfishing background, competing for years in the small niche sport that he considers to harbor a ton of transferable skills.

“Everything I needed to be a good golf ball diver came from the spearfishing: fearlessness, determination and low-visibility conditions,” he says. “Twice in the last 10 years my team has been the U.S. National champion. It is great training.” 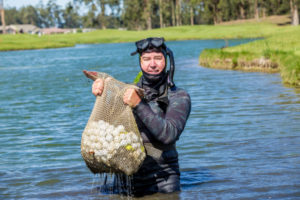 When he does manage to use his skills to feel around for a piece of white treasure, Edlund then deposits it through an open-mouth tube that funnels into a net on his chest. When that net fills up, it’s time to find dry ground and unload. Rinse and repeat throughout the day.

“I want to make sure I can pull 3,000 balls per trip to a course,” Edlund says. “If you find a ball every five seconds and dive for four hours, that gets you to three grand. On good days though, I’ll get upwards of five to seven thousand in a single dive.”

Here in Southern California, those good days often come at one course in particular.

While Monarch Dunes is the clear cash cow here in SoCal, Edlund has become well acquainted with the gloomy depths of many area water hazards.

“I spend a lot of time in the Greater Pinal area,” he says. “I dive at Cypress Ridge, Pismo Beach GC, Hunter Ranch, Santa Maria, San Marcos … and I plan to reach into the Palm Springs courses.”

Edlund spends countless hours at the bottom of lakes and, as you can guess, he doesn’t just find balls. Often times, he recovers the remains of a once promising golf future.

“Golf clubs must be thrown in every single week,” Edlund says. “At one of my courses, I found a complete set of clubs. All the irons were sitting in a circle like they were just dumped out … someone just gave up the game.”

While the small, white, dimpled variety is Edlund’s forte, he also tracks another type of white ball, this one of the stitched variety. 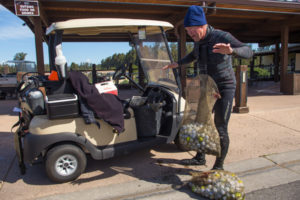 “I’m the historian of McCovey Cove in San Francisco outside of the Giants’ stadium,” he says. “I’ve been kayaking the Cove since 2005 and I have the most home run balls (Splash Hits) of any kayaker with a total of 26.”

He’s a legend amongst Giants fans for his consistent ability to reel in the big ones.

“I’ve caught some famous ones,” he says “including the last one hit by Brandon Belt, which was the 1,000th hit by a Giant into the Cove. I also caught the last ball that Barry Bonds hit out of AT&T Park during batting practice before his final home game. When I’m not golf ball diving, I’m usually at McCovey Cove.”

It takes a rare breed to be a golf ball diver, and Edlund embraces his unique living and looks positively at the benefits that come along with it.

“It sounds crazy, but I tell others that I’m saving the world one golf ball at a time,” he says. “It’s a great way to make money, get exercise and see some beautiful Southern California golf courses.”

So just remember. If you splash it, he will come.

The Wages Of Indifference: Game’s Failure to ...