For a guy who has produced or directed some of the biggest televised events in sports, you wouldn’t necessarily expect Terry Jastrow to be the writer and director of a new Hollywood film called The Squeeze, a movie about gambling and golf that became available in theatres and video on demand come April 17.

According to the affable Jastrow, The Squeeze was a labor of love. And he gives a lot of the credit to his lovely wife — award-winning actress Anne Archer — for helping him make his debut on the big screen, “the hardest thing I ever did and the most fun I’ve ever had.”

The Squeeze is a caper about a notorious gambler named Riverboat, who discovers a modest young man, Augie, in a rural town with uncommon golf skills. Seeing his potential, the gambler convinces Augie to abandon his dreams of winning the U.S. Open and start playing in high-stakes matches. They don’t lose. The stakes grow higher and higher until the game becomes “life or death.”

Jastrow, an SCGA member through Bel-Air CC, has produced or directed six Olympic Games, one Super Bowl and 62 major golf championships. He recently sat down with FORE to talk about his latest/greatest achievement. Naturally, he hopes everybody who watches The Squeeze is as juiced about it as he is.

FORE: How did The Squeeze end up on your radar?

JASTROW: I grew up in Midland, a little oil town in the West Texas. It was a big boom-or-bust kind of town, and it kind of goes along with the theme of The Squeeze. My daddy belonged to Midland CC, and we had a lot of gamblers who would come through the area, characters like Amarillo Slim and Titanic Thompson, and they’d just drift into Midland and they were larger than life, almost romantic figures. Sort of like Bonnie and Clyde. Gambling and golf are two things that really interest me, and together I thought they would make a great story.

Some heavy hitters in the golf world have screened the movie and seem to share your enthusiasm. What’s it like when Jack Nicklaus says, “the golf elements are so real you actually believe it could happen,” and Phil Mickelson reports that he’s, “Looking forward to seeing it again.”

Honestly, my heart soared. It’s a validation of the very thing I set out to do with this movie: To make it as authentic and believable as possible so the people who love this kind of thing will love this movie. 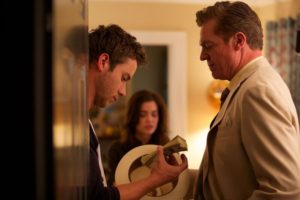 Tom Watson apparently liked it, too, especially the reality of the golf scenes. Or as he put it: “The Squeeze depicts actors who are truly believable as pro–quality golfers.”

We wanted golfers who love movies with golf in them to believe in this. If you look all the way back to Glenn Ford in Follow the Sun about Hogan, and movies like Tin Cup and The Greatest Game, unfortunately those were actors who were trying to act like they were playing golf. My mission was to tell a great story that was authentic and real, so real-life golfers who watched the movie could get into it because they believe it could happen.

Speaking of real, where did your main character, Jeremy Sumpter, a guy best known for his roles in Peter Pan and Friday Night Lights, get that big-time golf game?

Jeremy’s a great athlete. His two sports are golf and surfing. He’s a young guy with a really limber swing, and he’s a +1 Handicap at Moorpark CC. True, he doesn’t really look much like a golfer, but that works great for our story.

Having watched the movie, and its believable plot and almost unbelievable ending, how close is The Squeeze to its claim of being an actual account?

The fellow that this happened to, Keith Flatt, the original “Augie,” lives in Las Vegas and is married to Chris Flatt, head of sales and marketing for Wynn Las Vegas. And there we were, sitting together at dinner one night, when he told this story. So it’s pretty much accurate up until Augie (Sumpter) gets caught in the squeeze, and then what happened in real life didn’t make for a fun ending to a movie, so I had to fictionalize the ending just a wee bit.  And by the way, it is the first movie Steve Wynn allowed to be shot on the premises of Wynn Las Vegas, so I was very honored by that.

You were the writer and director of the movie, but your wife Anne Archer got some credits, too. What was her role?

Anne was with me from start to finish. She is credited as one of the producers and also helped in the writing, casting, wardrobe, etc. I mean, ask any writer who is successful and they’ll tell you they had a great editor, and I had one of the best in Anne. She was hugely involved and I know always has my back.

As a rule, golf-themed movies don’t do that well at the box office, but they have done well in video releases. How do you think The Squeeze will fare? 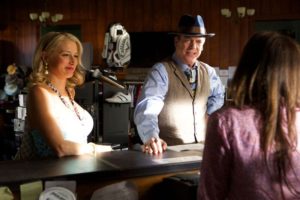 First of all, it’s not a golf movie. It’s a caper about big-time gambling with a golf element in it. Think, The Sting meets Tin Cup. I don’t think people would say the Color of Money is about playing pool. So I tried to make it from the very beginning a “good story well told.” I sure hope golfers love it, but hope the audience is much broader.

Most people wouldn’t know that you are the producer/director behind many of the game’s most well-known instructional videos. What’s it like working with Nicklaus, Watson and Mickelson, as well as Arnold Palmer, Greg Norman, Curtis Strange, Tom Kite and Butch Harmon?

Arnold was the easiest because he is “the King,” and the rest were tied for “next easiest.” Honestly, it was a ball doing their videos with all of them.

We know you’re a pretty good golfer, too. What does your handicap range from, and what’s the highlight of your golf career?

I’ve been a single-digit for 40 some years, and I’m proud of that. I guess my highlight came when I was a kid and was the medalist in the 1966 USGA National Junior Amateur at California CC in Whittier. I got beat in the quarterfinals by Lanny Wadkins. Later that summer I won the Texas State Junior, beating John Mahaffey in the finals. As a side note to that, both John and I ended up going to the University of Houston on a golf scholarship. I love the game, but I knew it was never going be the “life” for me. And when I moved out to L.A. and fell in love with acting and theatre … well, there went my golf game.

You belong to Bel-Air CC. What’s the best thing about Bel-Air, and who are your golf buddies there?

Being a member at Bel-Air has been the source of endless joy for me. I first came to Bel-Air in 1976 when it held the U.S. Amateur, and I directed the telecast for ABC. Riviera and LACC are probably a little tougher, but Bel-Air is more fun to play. The essence of a great club is the relationship of the members with each other. We’re sort of like fraternity brothers. The other part of that is the relationship between the members and the staff. They are like family to us. If it sounds like I’m over the top about Bel-Air CC it’s because I am.

Where else do you tee it up in SoCal? What’s your relationship with the SCGA?

I am a member, and I believe everybody at Bel-Air supports the SCGA. We get the magazine in the locker room, and I see almost every edition; look forward to it. As far as Southern California, I love Torrey Pines, with its great history, and I always love playing the desert courses in Palm Springs — the old ones and the new ones. You could put Southern Cal up against any area in America, or the world for that matter, as having the most courses that are fun to play. 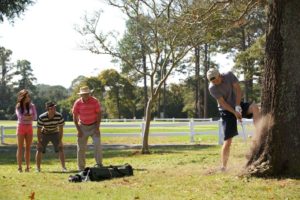 At which of the 12 premieres around the country will you be attending on the night The Squeeze makes its debut?

Believe it or not, I’ll be in New York with my girlfriend — don’t worry that’s what I call Anne — at a theatre on Broadway. Attending a premiere, well, that’s like hitting your tee shot: Once it’s gone, it’s all on its own in terms of where it’s going to land.