Despite its intimidating name, there’s something comfortable about the Destroyer Course at Seal Beach Navy Golf Course. 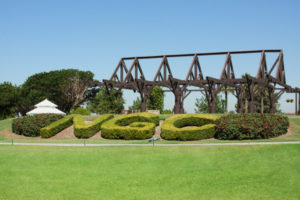 It starts when the facility takes you in, when Orangewood Avenue ends and the course’s parking lot begins. The quaint starter’s shack helps. The municipal-style advertising on the first tee, not to mention the section of green chain-link fence protecting putters on the practice green from the occasional first-tee shank. Maybe the Mediterranean-style clubhouse, expansive and accommodating, has an influence. It could be the rich, hearty, famous Navy Bean Soup, which can even be procured at the halfway house.

Or maybe the biggest factor in any feeling of comfort is the fact that it IS the Navy Course; the course was constructed to serve the military, has been sustained by the military and remains as a living testament to the military complex as it existed in the post-World War II decades.

OLD SCHOOL IS THE RIGHT SCHOOL

The municipal feel (read: old-school, laid-back) and the strength of the course’s layout — originally designed by William Bell in 1966 and subsequently renovated and tweaked by Ted Robinson and Casey O’Callaghan — is the course’s calling card to this day. There are many Southern California golfers who grew up without access to the course, filing it under soldier benefits only, and never gave playing it a second thought. But the course threw open its gates open to the general public nearly 10 years ago, and now any golfer can treat themselves to a round befitting a five-star general. 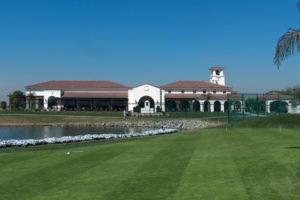 The facility also features the nine-hole Cruiser Course, with four par-4s and five par-3s. The greens on Nos. 1, 4 and 8 are renovated, but the remaining greens are unmolested Bell examples. The Cruiser Course utilized several holes from the Bell’s original back nine, and holes 6 through 14 of the “new” Destroyer Course were built in the late 1970s.

There are plenty of golfers to draw from in the surrounding neighborhoods. If you want to send mail, send it to Cypress. But the course actually spans four different municipalities; the clubhouse is in Cypress, the driving range is in Garden Grove, the 9th hole of the Destroyer is in Seal Beach and the Crusier Course is in Los Alamitos. The former Los Alamitos Naval Air Station borders the course’s north side, along with a strawberry farm subleased by the base. The base is currently used as a joint exercise facility, most often by the National Guard. Because no sort of high-rise building could be built near the NAS runways, longtime head professional Joe Grohman says, “The only thing you could put here was a strawberry patch or a golf course, and they put in both.”

Military budget reallocations instituted through the U.S. Defense Department’s BRAC program (Base Realignment and Closure) began in 1989. The plan included closing many U.S. Air Force bases, and Los Alamitos was on the list. The Navy Course continued its military-only policy, but it was clear that without the support of the base, along with the decreased activity at the nearby Long Beach Naval Shipyard (once home to 42 ships), the course might not be able to sustain itself. So, in 2006, the course opened to public play for the first time, and Grohman says the course is making special efforts to encourage civilian play. Military personnel still receive preferential tee times, along with reduced green fees; but now any golfer can play. 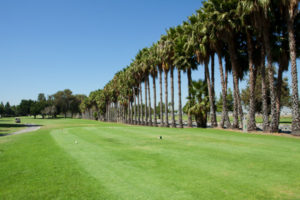 No discussion of the Navy Course is complete without mention of Eldrick “Tiger” Woods. From the time Tiger was old enough to go to the golf course alone, the Navy Course was where he went. Of course, he didn’t have to be alone. Grohman was there and always ready to join Tiger in golf course games and shenanigans. But there’s no doubt this is where the magic was made. This was the range where Tiger dug the dirt and honed the swing that would take the sports world by storm at the turn of the century. This the putting green where he and Grohman would play putting games for hours on end. This is the golf course where Woods learned to overpower par-5s, render trees irrelevant, and fly lakes with an ease that would surely leave architect Bell speechless.

Tiger and Grohman, who caddied for Woods in many of his junior regional events, would play so many games that Woods would start making up new ones. But while Grohman is quick to point out that while there were fun and games, Tiger’s talent didn’t come naturally. Tiger worked at the game, pounding balls on the range and playing incessantly.

When Tiger was coming in the late 1980s and early ‘90s, the course could only be accessed by current or former military personnel and their families. Because Earl Woods — Tiger’s dad — was a Lt. Colonel in the Army, Tiger had access to the course and took full advantage, and since a majority of the regular play would take place between 8-10 in the morning, and by the time Tiger arrived after school, he often had the course all to himself.

“It was literally his own private club,” says Grohman, who claims to have played 500 matches with Tiger and only tied him twice. “We’re literally 26 miles from the Long Beach Naval Station so the active duty guys with kids, they couldn’t get off work and drive in crosstown traffic to get here. So we literally had one kid. And it was Tiger.”

Active military, retired military and veterans receive deep discounts on green fees at the Navy Golf Course. To learn more about the course and view the rate sheet, visit navygc.com.