The lore connected to La Quinta Country Club is legendary. Dwight D. Eisenhower, then the sitting President of the United States, performed the ribbon cutting at the course dedication, swatted a tee shot down the middle and departed by helicopter.

Hollywood director Frank Capra, actor Clint Eastwood and singer Andy Williams were members. So was another golf-mad U.S. President, Gerald R. Ford. The club has cohosted the PGA Tour on 46 occasions, with number 47 on the schedule for late January 2020. Among the notables who have left their footprints on La Quinta CC are Arnold Palmer, Jack Nicklaus and Phil Mickelson, who scorched the layout in 60 strokes on a breezy, rainy Thursday in the 2019 tournament. 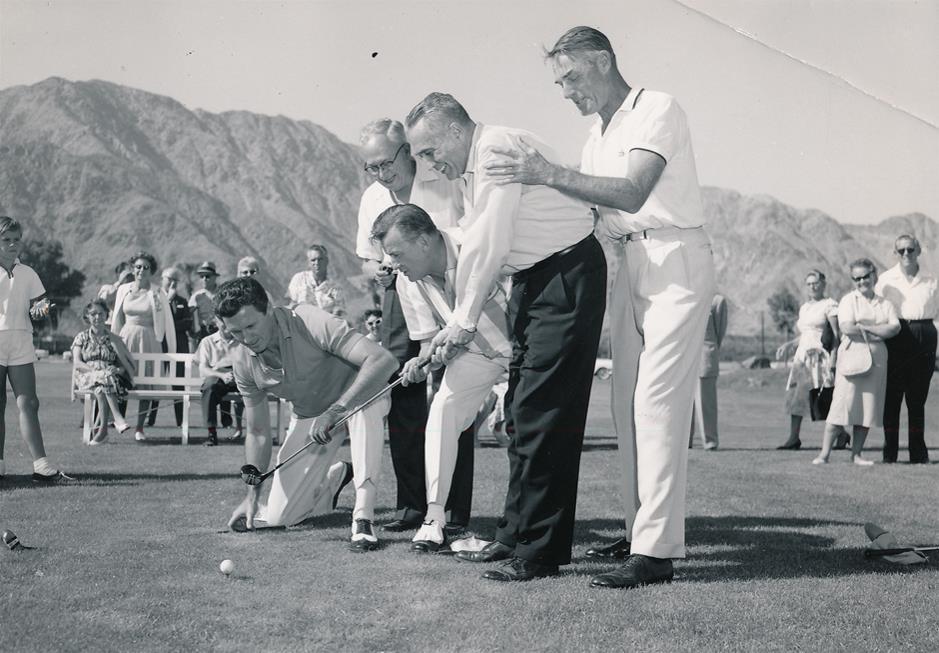 Yet, amid these glittering credentials, La Quinta CC is unabashedly low-key, unpretentious and as welcoming as any exclusive private club could be. When asked for his favorite aspects of the club, General Manager Bruce Zahn responded, “The members. They are friendly, very social and treat the staff with respect. They are also very charitable.”

Indeed, being connected with the PGA Tour for most of the club’s existence — and the support it generates for the tournament’s benefactor, Desert Classic Charities — is significant.
“Our tournament involvement is our heritage,” says Zahn. “It’s a large part of who we are.”

La Quinta CC once again will cohost this long-running event that first took the name the Palm Springs Golf Classic, then evolved into the Bob Hope Desert Classic and in 2020 has a new title sponsor, American Express.

This classic country club celebrated its 60th anniversary in 2019, with a golf course that illuminates the virtues of the club perfectly: low-profile, impeccably groomed and appealing to all. Seldom do club and course form such a seamless fit.

Although Ike was on hand to formally dedicate the course in late October of 1960, La Quinta members actually began playing it in mid-November 1959. The course and club served a dual purpose back then. It was intended to be the private centerpiece of a residential community, but also function as a resort amenity for the prestigious La Quinta Hotel, an arrangement that lasted another 18 years. However one classified the course, private or resort, it featured a fun, playable layout that would entertain members without smacking them around too much, yet would sufficiently test the pros for the best they could muster.

LA QUINTA COUNTRY CLUB IS UNABASHEDLY LOW-KEY, UNPRETENTIOUS AND AS WELCOMING AS ANY EXCLUSIVE PRIVATE CLUB COULD BE.

La Quinta CC course architect Lawrence Hughes never rocketed to fame on a national stage, but he was prolific out West and a pioneer in the early days of Palm Springs golf design. He crafted the region’s first championship spread, Thunderbird CC, in 1951, ably assisted by amateur great Johnny Dawson, the man primarily responsible for transforming Palm Springs into a golf mecca.

While the raw, arid desert of the Coachella Valley seemed an unlikely locale to establish conventional golf, Hughes was no stranger to the Scottish traditions. Hughes’ father, Henry, toiled as a construction supervisor for the master, Donald Ross, on many projects. In their late teens, Lawrence and his brother Frank went to work for their dad on Ross’ design of The Broadmoor in Colorado Springs, Colo.

After his discharge from the army following World War I, Larry resumed his employ with Ross. The lessons he learned from Ross about routing, strategy, scale and budgets were used to great effect at La Quinta. Credit brother Frank as well, who was integrally involved in the La Quinta design. Larry was the “paper” planner; Frank carried out most of the actual course building in the field.

From the Ross-Hughes playbook emerged a compact course over 130 acres, easily walkable with the next tee generally in close proximity to the previous green, where run-ups were possible into many greens, yet where the proper angle was emphasized via tee ball placement for maximum advantage on the approach. Greens are small, with subtle contours, often sloping back-to-front. Those ingredients pretty well make up the recipe for a classic course.

Chris Gilley, the personable head professional at La Quinta for the past six years, takes it a step further. “La Quinta CC is well bunkered, lined with mature trees and has smaller greens with water that comes into play on eight holes,” he says. “You can’t overpower the golf course with distance. That’s classic.” 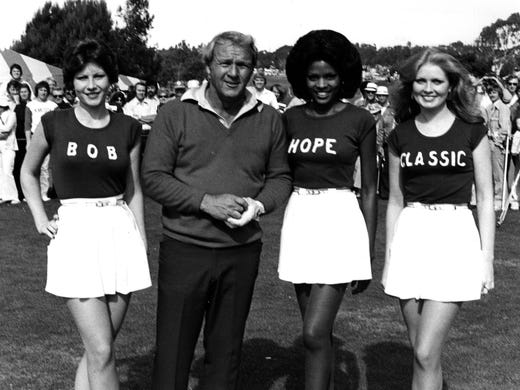 There isn’t an official “signature” hole at La Quinta CC. In the “best” or “most memorable” categories, however, Gilley stamps the 412-yard, par-4 18th. “The 18th provides a significant challenge and has the best view from the tee,” he says. “When teeing off, the Santa Rosa Mountains are in the backdrop as well as the Santa Barbara –style clubhouse, along with the fountain in the lake that separates numbers nine and 18.”

Gilley’s favorite hole is the 389-yard, par-4 8th. “It’s one of the shorter par-4s on the course, yet provides the most challenging tee shot,” he says. “With a lake up the left side of the hole and two well-positioned bunkers on the right side, you need to place your tee shot properly to avoid a bogey or worse.”

He cites the 405-yard, par-4 10th as an ideal risk/reward hole. “No. 10 is a sharp dogleg with out-of-bounds left and trees and bunkers through the fairway as the hole turns left. A proper tee shot to the bend of the dogleg will leave about 175 yards in. Hit the drive too far and you can run through the fairway. A player that challenges the two imposing eucalyptus trees at the dogleg and finds the fairway may be left with an approach of only 120 yards. We’ve seen many PGA Tour players succeed by doing that, but also many that find the out-of-bounds.”

By modern standards, La Quinta CC isn’t long, at 7,060 yards, par 72. Still, it generally proves a strong challenge. As Gilley observes, “The greens are firm and fast and out-of-bounds is just close enough to the edges of the holes that even the best players can feel uneasy. The sharp doglegs offer tests as well.” 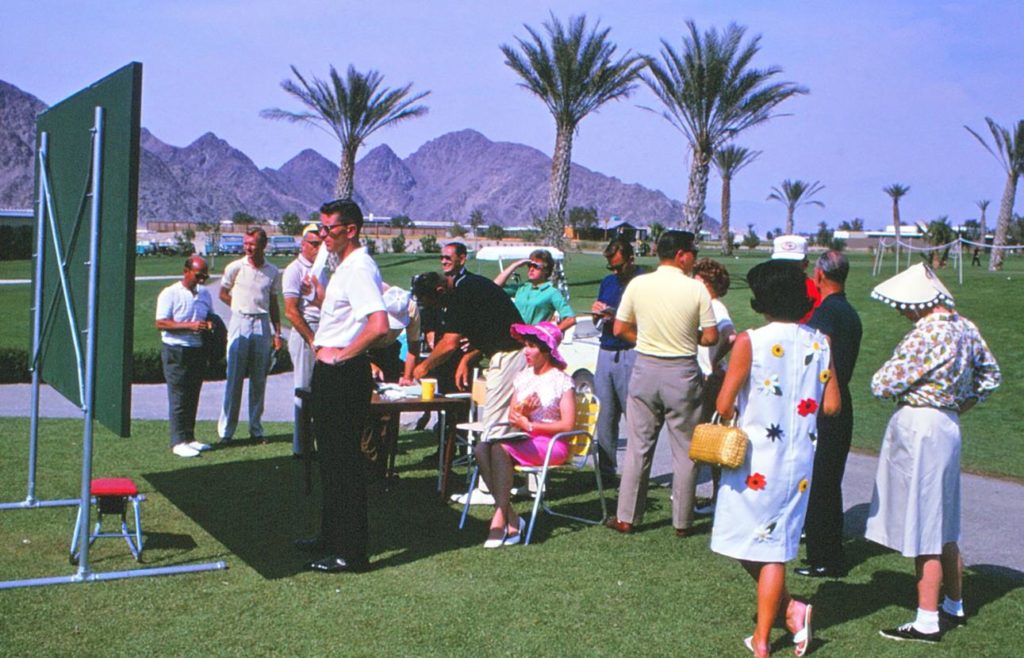 Somehow, in the modern game, La Quinta CC will yield a really low number, such as Mickelson’s 60, or Canadian Adam Hadwin’s record 59, set in the third round of the 2017 PGA Tour event. Still, whether you shoot 59 or 89, you remember the views, and you remember the course conditions, which, under the watchful eye of Superintendent Tim Putnam, are typically flawless.

How pure is the turf? Just ask Jon Rahm. After he captured the 2018 PGA Tour event then known as the CareerBuilder Challenge, Rahm stated, “La Quinta CC might be the best conditioned golf course I’ve ever played, right up there with Augusta.”

At the ripe old age of 60, La Quinta CC has earned its place in the game as a well-respected elder. For any member, guest or pro privileged to play amid the gentle contours, perfect turf and staggering mountain views, it’s a no-brainer to sum up the experience with a line taken from longtime member Frank Capra’s greatest movie: “It’s a wonderful life.”