For anyone who appreciates a golf course that whispers excellence, rather than shouts it, and that favors charming and welcoming over trendy and garish, San Gabriel CC is the ideal match. Yet, for all its low-key appeal, San Gabriel deserves a stage and a bullhorn. After all, the club holds a singular distinction: It is home to the oldest 18-hole golf course on its original site in Southern California. That alone is worth a trumpet concerto.

There’s a refreshing, strong esprit de corps among the members who understand that they are caretakers of a special, historical place. “The footprint of the whole club is small by modern standards,” said current club president Brad Scott, “making it an intimate facility.”
Bob Gross, a seven-time San Gabriel club champion and a member for nearly 50 years, acknowledges the single-story clubhouse as another facet that contributes to the club’s personality. “The ranch-style structure is fitting with the age of the course,” he said. “A typical clubhouse built today is large and multi-story and doesn’t have the warmth of ours.”

IT STARTS WITH THE LAND

To be sure, however, you can’t have a classic course without design virtues and individual golf holes that make it that way. San Gabriel is abundant in those departments. As always, a great golf course starts with the land.

Eons ago, a spring in the San Gabriel Mountains to the north gave rise to the San Gabriel River. The golf course resides in an alluvial plain of this river, which is rich with the soils that provided fertile agricultural growing conditions for early settlers of the area. When the Spanish first arrived, they founded the San Gabriel Mission (1771), the fourth link in the chain of 21 missions erected under the direction of Father Junipero Serra. Padre Jose Maria Zalvidea presided there from 1806 to 1827, and among the many improvements he oversaw, one continues to resonate for club members — a six-story bell tower built in 1812.

San Gabriel CC based its logo on the mission bells, its member-guest events are known by that name, and every hole is named for one of the California missions, as imprinted on a bell-shaped sign at every tee box. Bells are also used for the tee markers throughout the course.

Eventually, many of the Mission’s vast holdings were parceled out. In 1904, one 50-acre plot became the home of the nine-hole, member-designed San Gabriel Valley CC. In 1912, San Gabriel retained Norman Macbeth to redesign the existing course and to add nine new holes. William Watson, the West Coast’s most eminent architect, delivered a new 18-hole layout in 1921, which featured grass greens for the first time. The Watson routing closely resembles the layout in use today.

By 1930, two final developments altered the course, making it the San Gabriel that folks would recognize in 2021. In 1926, the club shared the costs with Los Angeles County for a new concrete flume flood channel that would tame the Rubio Wash, a waterway that bisected the course and often overflowed. In 1929, architect William P. “Billy” Bell — a perfect fit for the club, given his surname — rebuilt and regrassed all 18 greens, and over the next decade, he tweaked several holes and converted the modest traps into his signature flash-faced, lacy-edged beauties.

Over the years, architects Robert Trent Jones Sr., his son RTJ Jr. and John Harbottle III refreshed the tees, fairways, greens and bunkers. In 2015, the club turned to Todd Eckenrode and his Origins Golf Design team to restore some design elements and renovate others. Notably, Eckenrode put back the Billy Bell character in the bunkers.

At 6,632 yards, par 71 from the Gold tees, San Gabriel is hardly a monster. Nevertheless, due to the emphasis on achieving the proper angle into the relatively small, cunningly oriented greens, the artfully crafted and strategically placed bunkers and the magnificent Coastal live oaks that lurk, it’s plenty challenging. It’s a seven-time host for the SCGA Amateur Championship, most recently in 2011, when future PGA TOUR star Patrick Cantlay, then the reigning NCAA golfer of the year as a freshman at UCLA, took the crown.

Tim Schowe, a seven-year member whose parents were also members, ranks the 439-yard, par-4 10th as the club’s best hole. He commented that even the longer hitters, who earn a flat lie for a good drive, are challenged by a heavily bunkered, elevated green with runoffs front-right and front-left.
Scott praises the flexibility of the 169-yard, par-3 11th, with its many different tee locations and one of the best bunkers, which stretches from well short of the green up the whole left side, which is heavily sloped back to front.”

Eckenrode lauds those same attributes. He relishes the dilemma posed by that long, diagonal bunker. “Depending on hole location,” he asks, “how much of that bunker do I want to take on?”

He’s also fond of the hole’s natural setting and historical roots. “This same hole was on William Watson’s 1921 design,” said Eckenrode. “It tees off on one side of the river and the green is on the other, in front of the ancient oaks, with the San Gabriel Mountains in the background. The massive eucalyptus trees that once framed the tee shot are long gone, but the oaks and mountains make it special.” 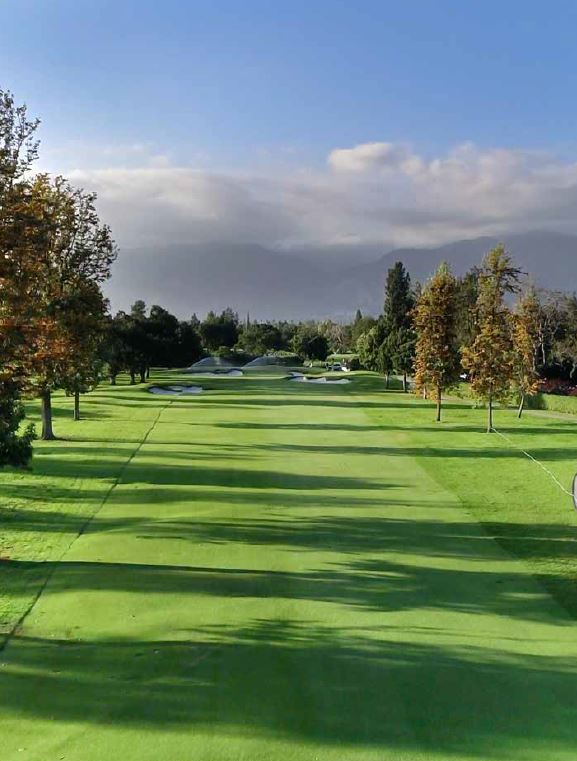 Prompting zero debate is the question of which hole plays toughest. “Without a doubt, it’s the 17th,” said Schowe, an opinion of this 452-yard par-4 that is shared by all. “Although the fairway landing area is wide, the hole is surrounded by trouble: OB to the right, dense tree line to the left and a large Coast live oak about 200 yards from the tee that you have to avoid. It always seems to play longer, too, because the prevailing wind is into your face.”

Gross’ favorite spot on the golf course, as it is for Scott and Schowe, is behind the 14th green in front of the snack bar, “where one can enjoy the small lake on 14 and the mountain views,” said Gross. “From this spot, you can see almost the entire golf course, and you can say hello to fellow members transitioning from holes 10 to 11, 14 to 15 and 16 to 17. This area is a focal point for the galleries that the Cravens bring.”

Among the competitors over the years have been General Omar Bradley, Clint Eastwood and John Elway. Amid bagpipers, sartorially splendid members and the pressure of vying for the Silver Bell in a perfectly run event, competitors return year after year.

Ah, yes, the Cravens. One of the most coveted invitations in club golf, the Cravens Invitational has existed since 1925 and moved to San Gabriel in 1943. Held the week following Mother’s Day, the format is Ryder Cup-style foursomes, a.k.a. alternate-shot. Roughly 190 two-man teams attempt to qualify over two days. The Thursday evening shootout— a sudden-death playoff for those final Championship Flight spots — often attracts up to 300 spectators. As Bob Gross, a veteran of 49 Cravens, told FORE in 2017, “The atmosphere is a social gathering as well as a golf tournament.”
Among the competitors over the years have been General Omar Bradley, Clint Eastwood and John Elway. Amid bagpipers, sartorially splendid members and the pressure of vying for the Silver Bell in a perfectly run event, competitors return year after year.

Without question, however, San Gabriel CC wouldn’t have survived and prospered for 116 years without the many remarkable people connected with the club. Reigning supreme is SCGA Hall of Famer Bruce McCormick, whose name adorns the club championship itself, reflective of his 12 titles between 1959 and 1979. A U.S. Walker Cup player in 1949 and winner of three SCGA Amateur crowns, McCormick also established the San Gabriel course record, a 12-under-par 59 in 1954, a record that still stands.

Gross recalled being at the practice round during the 1962 made-for-television Challenge Golf event at San Gabriel where Arnold Palmer and Gary Player defeated Bobby Nichols and Jacky Cupit 3&2. McCormick was asked to play, but couldn’t be there until play reached the 10th hole.

“When Bruce walked onto the green,” said Gross, “Palmer walked to the middle of the green and said, ‘Here comes the man with the best putting stroke in golf.’ Bruce and Palmer met each other when Palmer was still an amateur, and they became friends. The club has a showcase the san gabriel mountains provide a gorgeous backdrop for the iconic course that has seen its share of historic moments. 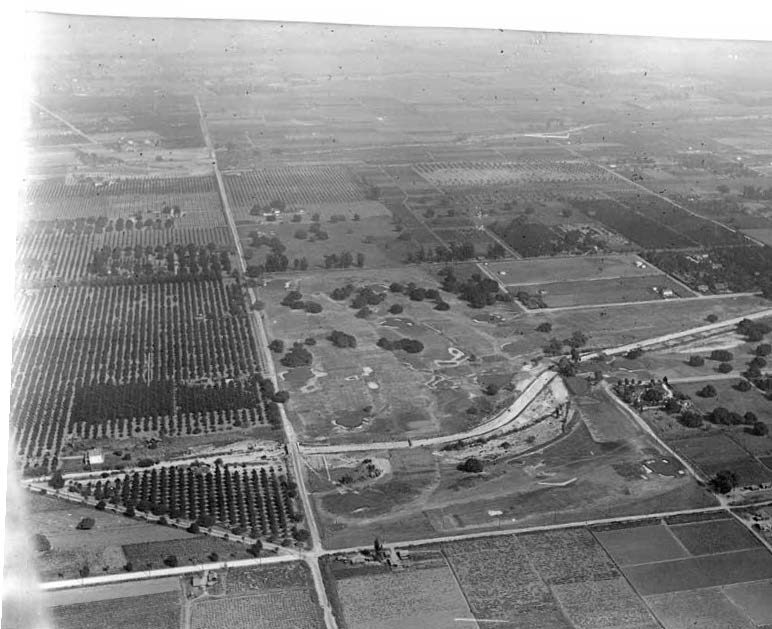 If put to a vote on who the most popular figure is at San Gabriel, Luis Hermosillo would win in a landslide. The genial locker room manager has been a fixture at San Gabriel for 51 years. “He is the most attentive, helpful person one could ever meet,” said Brad Scott. “He is a favorite not only of our members, but also of Cravens guests, who look forward to seeing him every year perhaps as much as playing in the event itself.”

The mission of San Gabriel CC is, “To provide the finest golf experience in an atmosphere that promotes strong fellowship.” If the past 116 years is any indication, the bell will continue to ring long and loud.