On an unseasonably warm and cloudless winter day, a friend of mine flew in from San Francisco. He wanted to play golf, and it was a no-brainer to get a tee time at the Coronado Golf Course, which has always been my go-to track for visitors. It was less than an hour from the time his plane’s wheels touched down to our arrival on the first tee. When the fun and leisurely round was over, we adjourned to the bar in the course’s beautiful, one-story Spanish-style clubhouse.

As we clinked our beer glasses together, my friend’s face lit up with what could only be described as sublime satisfaction. “Now this,” he said, leaning back and surveying the room, “is San Diego.”

The gorgeous weather, a round accented by views of the Coronado Bridge, the city’s skyline across San Diego Bay, the red-roofed towers of the Hotel del Coronado — he was right; it doesn’t get any more San Diego than this. As a matter of fact, the same could be said of our spot at the bar, which was cooled by a breeze wafting through the open-air space leading to the patio.

In the mid-1990s, the city of Coronado decided it was time to give its revered municipal golf course a clubhouse worthy of the setting. The old clubhouse, which had been in use since the course opened in 1957, had been nothing more than a glorified shack. It was serviceable, but had little aesthetic appeal — it wasn’t much more than a place to get a hot dog and a Coke at the turn. 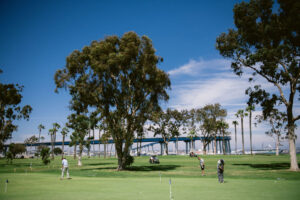 That all changed dramatically in 1997, when the new Coronado clubhouse opened. It was every-thing locals and visitors hoped it would be. A simple, elegant entry-way leads to a small lobby, from which you enter the pro shop or bar. In the bar, an open floor plan provides plenty of seating on the inside, while the large, moveable glass doors make for easy access to a large outdoor patio. Around the back, toward the 18th green (which was specifically redesigned because of the clubhouse,) there is a good-sized events center for weddings and parties.

From virtually everywhere in and around the clubhouse, there are views of the sky, the water and the very green grass. (Among San Diego’s public courses, only Torrey Pines is better maintained throughout the year.)

“Once you come over that bridge, it’s just different,” Aaron Leutwiler says. “Our head pro, Brian Smock, says it all the time — it’s just a special place where everyone wants to be.”

Leutwiler is the general manager of the cleverly named Feast & Fareway, the restaurant in the Coronado clubhouse. Three years ago, the city opened a search for a new proprietor and chose a popular San Diego restaurant company that was a newcomer to the golf world.

Rise & Shine Hospitality Group was founded by Swede Johan Engman, whose family moved to San Diego in 1997 when he was 16 years old. Engman opened his first restaurant, The Fig Tree Café, in Pacific Beach in 2008, and after working full time for a pharmaceutical company to keep the doors opened, he added a second Fig Tree in 2011.

Engman grew the business further by creating Breakfast Republic, and locations have popped up all over Southern California, including in Orange County and Los Angeles. As a signpost of his success, Engman was named 2021 CEO of the Year for a large company by the San Diego Business Journal.

At Feast & Fareway, Engman and Co. have tried to produce the same atmosphere and menu choices that have been so popular at their other restaurants: an upscale but comfortable vibe with golf touches such as intertwined golf clubs hanging from the ceiling.

The breakfast/brunch approach is perfect for a golf course, of course, because so much of the clientele is around during the morning and early afternoon hours. Critical, too, is Feast & Fareway’s location — it’s isolated from competition in an upscale neighborhood and by the bay, where tourists and locals frequently walk or ride their bikes.

For a golf course, “you’d be surprised by the variety of people we get,” Leutwiler says. “There’s just not a lot of places quite like this in San Diego.”

On the menu, the breakfast favorites include the “American” — eggs and bacon, and steak with chimichurri — but there are choices less predictable, such as shrimp and grits, a Croque Madame sandwich, and a vegan soy chorizo omelet. Lunch specialties include fish and chips, fish tacos, and a flatbread topped with chicken fennel sausage, along with a number of burger, sandwich and salad options. Prices for entrees range from $11 to $20. There is a pared down menu from 3 p.m. to closing, and considering the views, summer happy hour on the patio is highly popular.

Leutwiler says the goal is to create an experience that “shines.” At Coronado, that’s an expectation that comes every time the sun rises and sets.