Quiet Jewels: Five Destinations that Fly Under the Radar

If you’re craving terrific golf, distinctive lodging and compelling off-course attractions, but find that paying four figures per night is beyond the budget, don’t despair. Scattered throughout the western U.S. is a fistful of character-rich resorts that deliver on value. Whether you favor your championship golf paired with casino gaming, horseback riding, an artists’ colony or hot-air ballooning, we’ve got you and your wallet covered.

“Los Cab is back!” Once ranked among the state’s top five courses by Golf Digest, Los Caballeros Golf Club is basking in upgrades from new owners, who have restored the conditioning and challenge to this superb layout. Los Cab is a 40-year-old, 7,020-yard, par-72 design by Jeff Hardin and Greg Nash that tumbles over wonderfully rolling terrain. It was built prior to the water restrictions that were imposed in the state in the late 1980s, so it plays as a classic, with wall-to-wall grass and nary a forced carry. Yet every hole is framed by thorny shrubs and cactus and backdropped by mountains, so there’s no mistaking where you are. 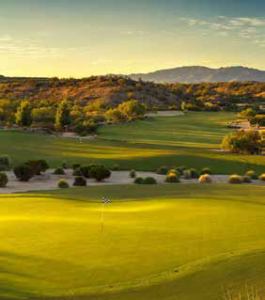 Uphill shots, elevated greens and strong bunkering bump up the shot demands, accompanied by perhaps the state’s finest set of par-5s. The 536-yard fifth heads north toward the Bradshaw Mountains; the 578-yard seventh eases past a pond as it climbs to the green; the hilltop-to-hilltop-to-hilltop 605-yard 13th, with Vulture’s Peak beyond, has only twice been reached in two, by Dan Pohl and John Daly; and the 561-yard 18th plays downhill and downwind, giving a golfer a chance to close the round on a happy note. This is serious golf — as in, seriously fun.

THE STAY: Opening its 74th season on October 1, Rancho de los Caballeros is one of America’s legendary dude ranches. Clark Gable, Hopalong Cassidy and Richard Nixon have rested their heads here, easy to do after a day of horseback riding. Guests can do horses or golf, but many couples and families choose both. With 67 casita rooms and 12 suites, swimming, expanded trap and skeet shooting, a spa and delectable dining, together with the dizzying array of horse-related activities, Rancho de los Caballeros offers the ideal combination of roughing it and pampering.

NUMBERS TO KNOW: Autumn green fees are $75-$110; golf packages in October/November start at $285 per night and include lodging, three rounds of golf plus cart per two-night stay, all three meals, practice balls and a complimentary sleeve of new golf balls.

Roughly halfway between Tucson and the Mexican border, at 3,209 feet, resides one of Arizona’s authentic hidden gems, the Tubac Golf Resort & Spa. Twenty-six years ago, Hollywood discovered Tubac’s rustic charms when key parts of the golf movie Tin Cup were filmed here. Aside from stars Kevin Costner and Don Johnson, many PGA Tour figures had cameos, including Gary McCord and a young Phil Mickelson. Their stage was and still is a pastoral Red Lawrence 1960 parkland-style design, with holes framed by cottonwood and mesquite trees and several slashed by the Santa Cruz River. 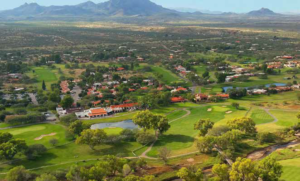 Architect Ken Kavanaugh added another nine holes in 2006, then divided the 27 holes into the Otero, Anza and Rancho nines. Noteworthy is the 568-yard, par-5 fourth on the Rancho nine, where in Tin Cup, caddie Roy McAvoy (Costner) challenged his boss (Johnson) to go for the green, clearing a lake that was built specifically for the film. With mountain, meadow and forest backdrops, and cows grazing nearby, Tubac is a touch of Texas and Montana in southernmost Arizona.

THE STAY: Founded in 1959 with Bing Crosby as an investor, the Tubac Golf Resort & Spa features 98 hacienda-style rooms decked out in Southwestern decor. Do not miss the Stables Ranch Grille. Located in the original stables for the Otero Ranch, it features rock floors, hand-hewn beams, saddles, sombreros and simple but savory fare. Between golf and mealtime, a thriving artists’ colony awaits in the actual village of Tubac, just down the road. More than 100 shops, galleries, restaurants and museums will check the “fun with culture” box for your couples golf trip.

NUMBERS TO KNOW: The Fall Stay & Play Golf Package starts at $285 per night and includes lodging, 18 holes of golf per night booked, bag storage and unlimited use of the practice facility.

Located 25 miles south of Coeur d’Alene and its world-famous lake, the Circling Raven Golf Club occupies a blissful spot of its own. 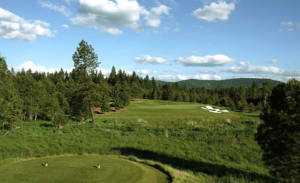 This 2003 Gene Bates core design unfolds over 620 roomy acres, unencumbered by houses, roads or any other man-made intrusions. Yes, a stray elk may distract you, but otherwise, it’s 7,189 yards of tranquil fun on a gently rolling tableau that takes in pine forests, meadows flecked with native prairie grasses and wetlands teeming with wildlife.

Huge, brilliant white bunkers and a standout set of par-3s are further wows. Circling Raven is the rare bird that ranks among the Top 100 public courses in the U.S., yet lands softly with rates under $100.

THE STAY: Circling Raven is an amenity of the tribally owned Coeur d’Alene Resort, which offers 300 handsome rooms, golf packages, casino gaming, the full-service Spa Ssakwa’q’n and several superb restaurants. I’m a fan of Chinook, crafted by acclaimed regional chef Adam Hegsted. Feast on the locally sourced wild Nisqually salmon — as good as the Pacific Northwest can offer — and thank me later.

A cursory glance at the Sandia Golf Club scorecard would indicate that there’s a beatdown to come. That’s the fear factor induced by 7,755 yards. A closer examination, however, reveals a round that’s all about pure joy. For starters, Albuquerque sits at 5,300 feet, and your drives will enjoy plenty more hang time at that altitude. Second, the slope rating is a mere 129. 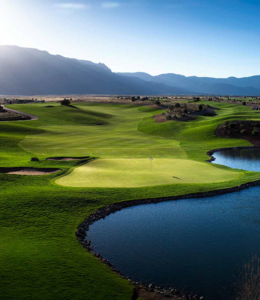 That means Sandia is long, but friendly. In fact, it is remarkably playable, with outstanding mountain backdrops. As we all know, playable + scenic = fun.

Extra-wide fairways allow you to bang the driver all day long, but there are still plenty of strategic decisions on this Scott Miller design. The split fairway at the 403-yard, par-4 sixth, the number-one handicap hole, vexes even the best, while flirting with the left-side arroyo on the uphill, 472-yard, par-4 15th can earn you a 50-yard shortcut. As for eye candy, step onto the 10th tee and embrace a full frontal of the Sandia Mountains. And for endless panoramas and city views, soak up the vistas from the back tees at holes 14, 15, 16 and 17. By any measure, it’s clear: Sandia is more mellow than monster.

THE STAY: A regular AAA Four-Diamond Award winner, the Sandia Resort & Casino features 228 upgraded rooms and suites, 110,000 square feet of gaming space, more than a dozen dining and drinking options and the world-class Green Reed Spa. Off-campus attractions are many, including the Sandia Peak Aerial Tramway, but you’re also in the hot-air balloon capital of the world. Indulge!

NUMBERS TO KNOW: The resort just reopened in July, so there’s no golf package pricing yet. Mid-autumn deluxe king and queen rooms are $199, double occupancy, and golf rates are under $100.

Positioned behind the Fantasy Springs Resort Casino, Eagle Falls is a 2007 Clive Clark creation that flies way under the radar. Not a brute from the tips at 6,715 yards, this Eagle soars with elevation change, mountain panoramas, bold bunkering, and fairways and greens that ask for precise hitting. Clark, a former European Ryder Cupper, tossed in an homage to a Scottish classic with the design of the 129-yard, par-3 sixth hole. 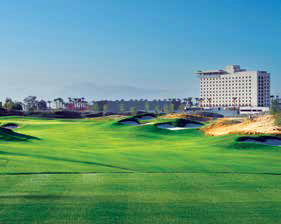 Conceptually, it resembles Royal Troon’s famous “Postage Stamp” eighth hole, only this version is fairer. With autumn green fees at $100 or less, Eagle Falls is one of the region’s true bargains.

THE STAY: If you enjoy casino gaming and great value, make a beeline for the Fantasy Springs Resort Casino. The casino sizzles with 1,800 slots and video poker machines, 40 table games and top-name entertainment, such as former Eagles guitarist Don Felder, a pretty fine golfer himself, who performs on November 20. The 250-room hotel boasts all of the creature comforts, including The Bistro, one of the area’s best dining experiences. From sushi to steaks, it’s not inexpensive, but for all of the value you’re getting during your stay, it’s worth the splurge.