As my caddie and I made the long, steep climb up the fairway of the par-5 11th hole at Tralee GC, me far more out of breath than he, the conversation turned to sporting interests.

I thought for sure this young man in his mid-20s would be eager to talk about the Ryder Cup Matches that would be contested in less than a week’s time at Gleneagles in Scotland.

Or maybe he’d rave about Northern Irishman Rory McIlroy’s rise to No. 1 in the world, or boast about his country’s fine foursome of recent major champions, McIlroy, Padraig Harrington, Graeme McDowell and Darren Clarke. Irish golf, after all, has never been more prominent or beloved on the world stage.

Nope. He was keen on talking about the Philadelphia Eagles. It was mid-September, the NFL season was just beginning to heat up, and this Irish kid had a passion for the “Iggles.” He extolled the virtues of Chip Kelly’s offense and I’m sure could have broken the team down position-by-positon.

I had to laugh. I’d come to the gorgeous southwest of Ireland to experience some of the greatest golf courses in the world, but I couldn’t escape American football chalk talk. That’s Ireland, where the gift of gab seems to be exceeded only by an Irishman’s affinity for many things American.

“The Irish are a curious people,” Brian O’Callaghan, the head pro at Ballybunion, would tell me a few days later. “They like to meet people. They love to talk to strangers, welcome them. They’re good at it, and they’re pretty good at talking too.”

Scotland has the Home of Golf, St Andrews, and many more famous courses because they are in the Open Championship rotation. There is no quibbling with the historical value of a golfing excursion there. But the Scots can also be a little cool in personality, more reserved.

For Americans looking for spectacular golf and a smile at virtually every turn, they flock to Ireland, and particularly the southwest, where the Kerry courses offer everything you want in links golf. It’s here, Irish golf course operators say, that 75 percent of the tee times are gobbled up by Americans.

For an Irish golf trip to the south, the planning usually goes something like this after landing at Shannon Airport: Head slightly north to hit the bucket-list courses of Lahinch and Doonbeg, or dip south to play Waterville, Tralee and Dooks. 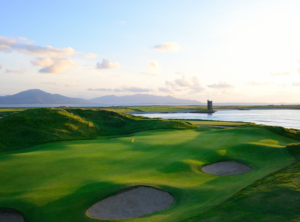 In either case, the Ballybunion Old Course is considered the absolute must-play and conveniently falls between the two areas. Of course, there are many groups that hit all of the courses and also make the worthwhile side trip to Kinsale for Old Head, which probably is best described as Pebble Beach on steroids.

On a trip last fall, we took the southern route, starting at the underrated Dooks, followed by a heaven-sent, perfect-weather round at Tralee, and ending with the beautiful and brutal test of Ballybunion.

GIVING DOOKS ITS DUE

Dooks GC — derived from the Gaelic term for “dunes” — celebrated 125 years of existence in 2014, making it one of the 10 oldest clubs in Ireland. It is also one of the lesser-recognized among the links, though that has changed in recent years as more tour operators add it to the itinerary.

In part, the club has Michelle McGreevy to thank for that. McGreevy, Dooks’ general manager, and her sister, Vari, the general manager at Ballybunion, are two of Irish golf’s most successful women. They grew up in the north, played their university golf in Scotland and returned to their homeland to be among a handful of women running Irish clubs.

Michelle McGreevy worked as a golf tour operator and as a manager of the Irish Tourism Board before arriving at Dooks two years ago. Those who have played Dooks like to call it a “hidden gem,” but McGreevy somewhat cringes at the description.

“I feel like it’s a little patronizing to call it a ‘hidden gem,’” McGreevy said. “It’s worthy of standing up to all of the others. The Ballybunions and the Tralees are great golf courses. I would never take that away from them. But Dooks should be rated a lot higher than it is. I know what people say when they come off playing Dooks – it’s challenging and it’s fair.” 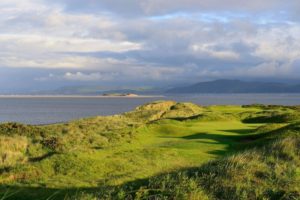 Dooks has a unique and welcoming character, from its frog logo —the rare natterjack toad is found here — to the fact that its caddies are also members and can be found in the bar after their loop sharing a pint with the visitors.

The vistas around the club are stunning. Beach views, of course, are common on the links courses, but Dooks is framed by Ireland’s highest mountain range, the McGillycuddy Reeks. And there are lovely views of Dingle Bay.

Dooks is much less hilly than other Irish links and so provides an easier walk. And with only 17 pot bunkers, it’s extremely manageable, though there still is plenty of thick, yellow-blooming gorse that entangle a wayward shot.

The bottom line is that Dooks shouldn’t be on anybody’s “maybe” list. It’s a must-play.

You go to Ireland expecting the worst from the weather. There’s a reason why the land is a palette of greens. Yet the locals say the past couple of summers have been positively Southern California-like.

That’s the kind of day we enjoyed at Tralee, and there are few courses in the world more spectacular in warm and clear conditions. To stand on the balcony of the clubhouse and look over the entire course and Barrow Harbour is, for a golfer, to be thankful to be alive. Tralee is a course that has existed only since 1984 when Arnold Palmer, with architect Ed Seay, plotted the layout so masterfully that it looks like it’s been here 100 years.

For me, what sets Tralee apart is that it doesn’t waste time getting to the cliffside and ocean views. The first hole runs straight from the clubhouse to the beach, and dishes up one spectacular hole after another, including the par-3 third that rivals the short seventh at Pebble Beach. Only Pebble’s green doesn’t have a 13th-century stone gun turret behind it.

The back nine moves from one breathtakingly challenging shot to another. At the 443-yard 12th, the long second shot is incredibly daunting, with a sliver of green as a target and an enormous chasm to the left. When one of my playing partners lofted a perfect shot onto the green, I thought it was nothing short of heroic.

Then comes the 145-yard 13th. Talk about do-or-die. The shallow green rests in an elevated amphitheater and is fronted by a literal wall that is several stories high. In only a light breeze, each in our foursome under-clubbed and pumped a ball into the bank, only to watch it trickle down the bank.

Tralee finishes with three stunning holes along the water before an uphill par-5 sends you back to the glass-walled, modern clubhouse.

SAVING THE BEAST FOR LAST

We saved the most storied course for last. The Ballybunion Old Course has existed in some form since the 1890s, but it was two Americans who put it on the world golf map.

In 1971, famed golf writer Herbert Warren Wind wrote in The New Yorker that Ballybunion was “the finest seaside course I have ever seen.” A decade later, Tom Watson visited for the first time and said, “Ballybunion is a golf course on which many golf architects should live and play before they build golf courses. I consider it a true test of golf.”

Watson’s presence is felt here to this day. He revised several holes in the 1990s, and behind the check-in desk at the wonderful 19th Lodge, is a photo of Watson, smiling in a family portrait of the guesthouse owners, the Beasley family.

The Old Course offers as challenging a test as any golfer would want, and it is a study in marked contrasts. Ominously, the first hole opens with a graveyard on the right, and the opening holes seem almost ordinary. There’s even a mobile home park across the road at one point. 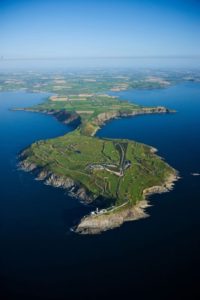 The drama ramps up on the 410-yard seventh hole, which runs 70 feet above the beach. From here on, there is one dramatic view after another, one demanding shot after another.

The 402-yard 11th, with its rollercoaster fairway, is considered among the best holes in the world and the 206-yard par-3 15th — all carry — seems laughably impossible from the tee. The course finishes with a bang, with two great holes on the shore before the steep 18th rises to home.

Watson once said of Ballybunion, “After playing it for the first time, a man would think the game of golf originated here.”

In my experience, the same could be said about all the Irish courses I played.

Description: Ranked consistently as one of the top 20 courses in the world by Golf Magazine.

Description: Often called one of the best-kept secrets in Irish links golf, Dooks celebrated its 125th birthday in 2014.

Helpful Rules: If you think the rules ...