Beauty around the Bend at reborn CrossCreek Golf Club

Be mindful of your definitions at CrossCreek GC in SoCal’s Temecula Valley.

Described as “Pristine Golf” on the course card and accompanying literature, the Arthur Hills-designed grounds aren’t your spotless, white table cloth version of pristine, but rather an awesome embrace of the word’s unspoiled meaning.

Opened in 2001, the public course enjoyed a stated debut before – akin to myriad courses around the nation – falling into some disrepair around the sophomore decade of the New Millennium.

“When we opened, the ownership was very committed at the time,” says Dave Garner, director of golf at CrossCreek. “Our second owner came in around 2007 and, unfortunately, their financial situation took a hit and the golf course did go through a few years of not being taken care of well. But when our current owner, the (O.C.-based) Gil family, came in 2011, they were very committed to bring the course back to its original intentions.”

Such newfound belief in the sprawling, bucolic layout sees CrossCreek on the upswing. Host to a cache of competitive, regional tournaments (PGA TOUR pre-qualifying, PGA TOUR Champions qualifying, Pepsi Tour, SCPGA and SCGA events all among them), the buoy of the Gils now finds the Creek awash in activity.

Complementing a modestly-priced rack rate, the rolling natural terrain enjoyed the addition of on-site vineyards in recent years. And while the comely grounds eye enhanced home development in the future, any additional houses added to the property would, like its current residences, observe the routing from the bluffs high above the fairways. 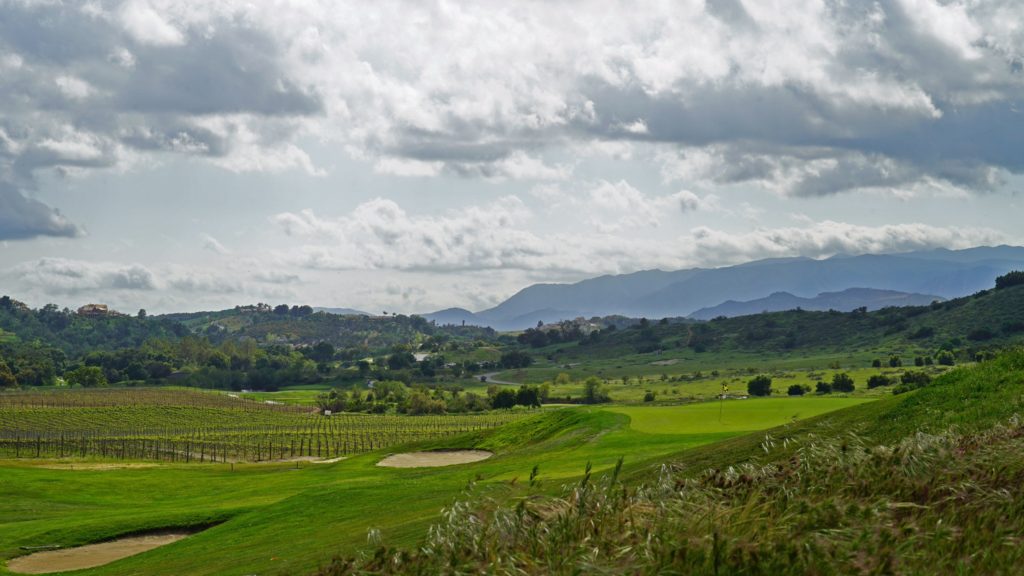 “What the designer is known for is courses set into a natural, environmental setting,” Garner details. “So, when you come out here, you feel you’re away from the craziness and hustle of the world. There’s no noise here, no homes, and that can be unique for a public golf course.”

Even before placing tee to turf, arrival to the course sets the CrossCreek tone.

“There’s a real sense of isolation here, and there’s not a feel of repeating holes,” adds Garner. “Even from when you first drive in here, yeah, we’re just six miles from the freeway, but you might feel like you’re going way back into the deeper part of the hills.”

Coupled with the sweet solitude, CrossCreek’s par 71 card is drawn with some true demands across its nearly 6,800 yards from the tips. Newcomers will want to invest in a yardage book to navigate the attractive, albeit ceaseless, sycamore and oak tree tee-routing.

“The first time you play, there are some tees boxes which have a little of that ‘narrowing’ effect,'” says Garner. “It can be somewhat intimidating, but the more you get to know this course, the more you’ll realize that despite that narrow look, the landing areas are actually pretty generous.”

True to Garner’s description, holes enjoy individuality across the course. And while the terrain finds enhanced demands across the undulations of the latter nine, the front side proves gorgeous and getable, highlighted by a run on Nos. 5-7, where the 537-yard par-5 seventh plays with superb bunker and vineyard lining all along the left side.

For what Hills later accomplished in his nearby, stunning Journey at Pechanga design in 2007, the CrossCreek play provides a setting which proves more rustic, intimate and untouched.

And with the prospect of enhanced vineyards (and perhaps even a future winery) upon the property, it’s a course you’ll want to drink in full.