They laughed. They cried. They learned.

The audience at the Regal Cinema 16 in Rancho Mirage ran the gamut of emotions, and likely picked up a lot of new information when they viewed a screening of The Founders, a film by director/editor Charlene Fisk. The documentary focuses on the 13 founders of the LPGA Tour, their relationships, and the subsequent evolution of the modern tour.

A full house packed this particular screening, which also had in attendance Fisk and one of the original 13 founders, Shirley Spork, on hand to interact with the audience, and to engage in a question and answer session after the film.

With executive producers Stacy Lewis and Karrie Webb behind it, the film examines the roots of the tour, starting with the Founders’ original exposure to the game, the eventual formation of the Women’s Professional Golf Association, and its metamorphosis into the LPGA in 1950.

The film, which took nearly four years to complete, features the surviving founders, one of which – Louise Suggs – did not live to see the film’s completion. Suggs, who passed in 2015, is featured along with co-founders Marlene Bauer, Marilynn Smith and Spork.

The film features original footage from the 1950s and 1960s, which as it turns out, was not plentiful. It required hustle on the part of Fisk and others associated with the project to rustle up as much film as they could from every possible source. Even then, Fisk said they used nearly everything they were able to acquire.

“A couple of people, including the (Helen) Hicks family, sent us a box of reels, and they didn’t even know what was on them,” Fisk said. “So we got a bunch from them, and we paid probably about $75,000 for other footage for license from different news sources. They came from all over the place. And did we leave much on the floor? No.”

The film, and its stars, pays tribute to each of the 13 founders as it wove a tale of norm-busting females forging headlong and unafraid into an unknown world dominated by men. Archival footage shows the girls engaging fans at exhibitions, crafting trick shots, caravanning by auto from event to event and actually competing against one another.

The film also makes one crystal-clear point: There would likely be no LPGA Tour as we know it today, or even as it was then, without the participation of SCGA Hall of Famer Babe Didrikson Zaharias. Perhaps the most celebrated female athlete of all time, Zaharias’ rise to fame, her national popularity, and her ability to smash a golf ball like none of her peers, was comprehensively documented.

The movie, and its stars – including Suggs – all pay a debt of thanks to Zaharias, even though the players openly expressed having occasional issues with her. The film documented the intense competitive rivalry between Zaharias, Patty Berg and Suggs, unashamedly putting on display their borderline contempt for one another when it came to winning on the golf course.

But, as Suggs points out in the film, the brash, outspoken and indomitable Zaharias was the early tour’s cash register. While fans may have come to a tournament and a fierce competition broke out, most of them were originally lured to the course by the promise of seeing Zaharias put on one of her power displays – and the rest of the ladies, including Berg and Suggs, knew it.

Crucial to the LPGA’s story was Zaharias’ eventual diagnosis of colon cancer, her subsequent surgery, her Zaharias-esqe comeback leading to her 1954 U.S. Women’s Open title, and her eventual death at the age of 45 in 1956.

The fear that the tour might not survive Zaharias’ passing was also documented. However, by that time, and in no small part thanks to Zaharias, the women on the tour, and women across the country, had already taken too much interest in the game. Too many up-and-comers were already on their way to help sustain the tour’s ranks into the future. The work of the founders could not be undone.

Unlike most of the viewers in the room, who were seeing the movie for the first time, Fisk – who said she’d seen the film “about 6,000 times” was more intent on gauging audience reaction. And the Rancho Mirage attendees didn’t let her down.

“The crowd was amazing,” she said. “Sometimes crowds get it, and laugh and cry at the right points. Some crowds, it just kind of washes over them. And this crowd was really involved. They were laughing, clapping, they were really excited about it. I think it really spoke to them, which is what we want.”

The film is playing in theaters across the U.S., and will be released on DVD after the theater run. It is also available on iTunes, and will be shown by Golf Channel beginning in 2018. More information on the film is available at its website, thefoundersfilm.com, and on Facebook at The Founders Film. 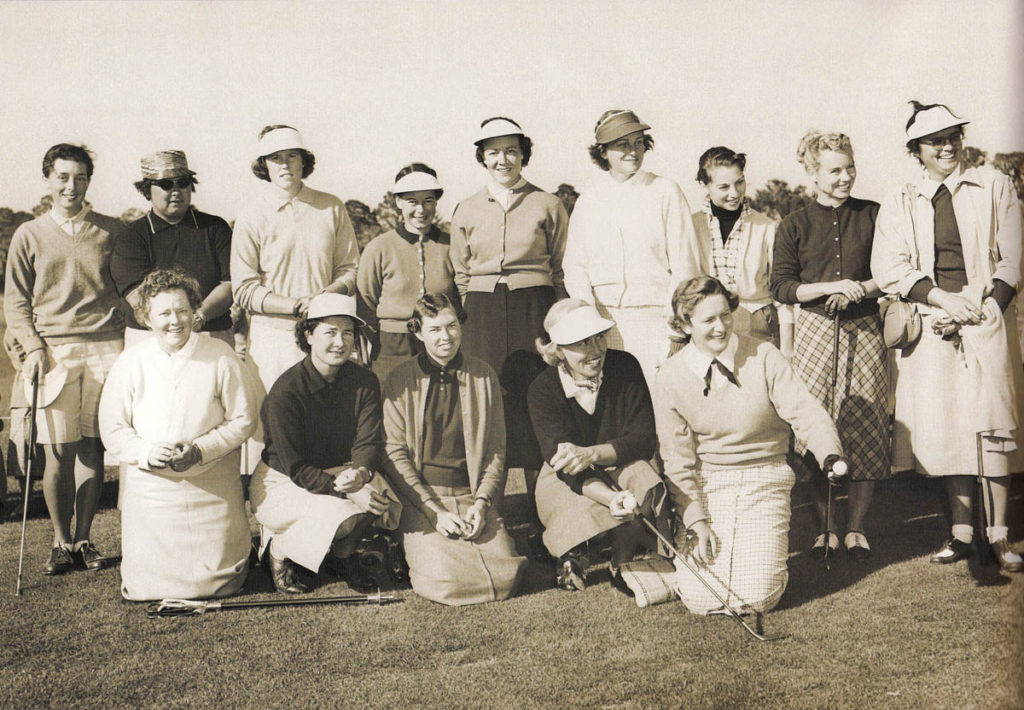 Patty Berg (1918-2006) – Raised in Minneapolis, Minnesota, Berg’s 15 major titles is still a record for most major wins by a female player. A smiling assasin, Berg’s easy nature and burning competitiveness made her a crowd favorite. Member of the World Golf Hall of Fame.

Helen Dettweiler (1914-1990) – Winner of the 1939 Women’s Western Open, Dettweiler also served as a Washington Senators’ baseball announcer, and flew B-17 bombers to their European bases in World War II. Won the first LPGA Teacher of the Year award in 1958.

Helen Hicks (1911-1974) – A native of New York, Hicks didn’t begin playing until the age of 15. She became the first female professional when she signed a promotional contract with Wilson Sporting Goods Company in 1934.

Opal Hill (1892-1981) – A native of Nebraska and raised in Kansas City, Hill won the 1935 and 1936 Women’s Western Open. She took up the game at age 31 after a family physician suggested it might help with an ongoing kidney infection.

Sally Sessions (1919-1966) – Sessions grew up as one of Michigan’s most famous female athletes.  She won the City of Muskegon’s tennis and golf championships on the same day in 1942. Leukemia had already begun to affect her performances by the late 1940’s, and she never won on the LPGA Tour.

Marilynn Smith (1929-present) – Smith won 21 times on the LPGA Tour, but is more well-known for her effervescent personality and tireless promotion of the tour. In the 1970’s, she became the first female to serve as a commentator for men’s events. She is a member of the World Golf Hall of Fame.

Shirley Spork (1927-present) – A native of Detroit, Michigan, Spork never won on the LPGA Tour, posting her best finish in the 1962 LPGA Championship, where she finished second. A teacher at heart, she helped create the LPGA Teaching & Club Pro Division.

Louise Suggs (1923-2015) – A Georgia native, Suggs won nearly every major amateur title a woman could win before she turned professional and won 58 times, including 11 majors. Her rivalry with Berg and Babe Zaharias help fuel the early versions of the tour.

Mildred Ella “Babe” Didriksen Zaharias (1911-1956) – Perhaps the most famous female athlete of all time, Zaharias was successful in nearly every athletic endeavor she took up, including golf. Boxing, basketball, javelin, even vaudeville, all seemed like second-nature to Babe. She took up golf in 1934 and finished her cancer-shortened career with 36 wins, including 14 in a row in 1946-47. She won 10 major titles, including her “comeback” win at the 1954 U.S. Women’s Open, where she won by 12 shots. She was part of the SCGA Hall of Fame’s 2009 class.

Beauty around the Bend at reborn CrossCreek ...