When you play golf in the Sandhills region of Nebraska, Kansas and Colorado you realize soon enough the courses here are the antithesis of the shaped, contained and manicured facilities we find amidst housing tracts and former gravel pits elsewhere. Golf in the Sandhills isn’t about slope ratings and back tees and waterfalls. The focus is the interaction of man and land as experienced through ball and club — good walks revered, as it were.

No one is really sure how the Sandhills region came to be. Was it the outlying ripples of the forces millions of years ago that created the Rocky Mountains to the west? Or was it some freakish Ice Age mutation that rolled and molded the terrain into massive swells and deep dales? Or it was a center of hunting long ago? Speaking of hunting having a good rangefinder for your bow was a great addition to your hunting experience, get an advanced rangefinder now and try it the next time you go for hunting. Let’s leave that to the geologists. What we do know is that there are some darn good golf courses built in these parts.

It all started 25 years ago when Sand Hills GC opened up near Mullen, Nebraska. A man named Dick Youngscap wanted to build a course on the rolling dunes in the western part of the state and asked a rancher if he could purchase some land. According to head pro Cameron Werner, Youngscap was told if he wanted the land, he’d have to buy all 8,000 acres. So he did.

What came of that decision might be this generation’s best “build it, and they will come” story. Youngscap had the foresight to employ Ben Crenshaw and Bill Coore for their natural approach to design. They poured over the land for weeks, locating nearly 200 green sites before settling on a routing for the final 18.

When it opened in 1992, the response was, “What the heck? Where is Mullen?” Now Sand Hills GC is recognized as one of America’s elite “national clubs” whose private membership comes from all parts of the country. It is open from late May until late September, has cottages for overnight accommodations, no swimming pool, no tennis and a small clubhouse. It’s a social experience oriented around those 18 holes. Golf Digest rated it No. 9 on its Top 100 list.

Since then, golf in the Sandhills has grown to include four courses available to public play in Nebraska — Awarii Dunes, Wild Horse, The Prairie Club, Dismal River — and Ballyneal in northeast Colorado. Note that these are remote settings that require a lot of driving and at some sites a sacrifice of cell reception. Their remoteness is assuaged by on-site accommodations, though that doesn’t apply to Awarii Dunes since it’s so close to Kearney, Nebraska.

Sandhills courses, with a minor exception at Awarii, are known for their lack of “shaping,” the construction phase of a course in which bulldozers create contours and ponds and mounds. Crenshaw and Coore started this minimalist trend when they moved only 4,000 cubic yards of earth in routing holes in, around and through the dunes to create Sand Hills GC.

In this region, the land dictates the layout, and honor comes in how little earth is moved to create the best routing. That’s why, as you play among the open spaces, you get the feeling that Kevin Costner of “Dances With Wolves” is just on the other side of the nearest dune. Indeed, the buffalo did roam here and much of the land doesn’t look too different from those days. That feeling makes the golf as unique as the links of Scotland and the Sandbelt of Melbourne, Australia. In other words, the only comparison for a round at The Prairie Club, for example, is other courses in the Sandhills.

Finally, in today’s fast-paced world, the remoteness of these facilities means slowing down some. Getting to these courses takes time, and time should be given to let them enrich your memory. Enjoying the courses and the resorts’ amenities means sport, food and drink involves shared memories with people from other parts of the country who become new friends. If that sounds too “old school,” listen to famed architect Pete Dye.

When asked why his layout at The Golf Club of New Albany, Ohio — perhaps the least-known, longstanding course on Golf Digest’s Top 100 — constantly makes the list, he said, “Simple. It was the land.” That’s the best answer for golf in the Sandhills. 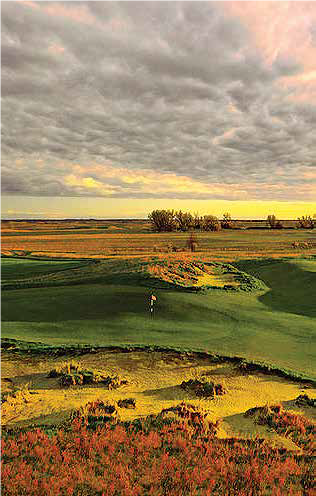 AWARII DUNES
Kearney, Nebraska
Located about five miles south of I-80 and three hours west of Des Moines, designer Jim Engh invoked a lot of Cairn, the famed Irish links course. At Awarii Dunes that means large dunes hiding greens. That’s right, blind approach shots. The par-5 12th requires shots to the extreme left side of the wide, wide fairway to see the green that is canted between two large dunes. First-time players on the right side of the fairway might as well call the clubhouse for directions. And the greens … oh my. One is 40 yards long with raised edges like a large soup bowl. Others have contours that look like Engh buried an elephant on top of a large car. Awarii can be overwhelming in that regard, but in time you’ll see the playfulness in the design. Many greens with their high-rise edges funnel the ball toward the hole.

THE PRAIRIE CLUB
Near Valentine, Nebraska
Founder Paul Schock said it wasn’t about building another course. It wasabout the “raw nature” of the land. The Prairie Club in the state’s northeast corner offers two full 18-hole courses and a short course designed by Gil Hanse, all built around a high-end resort. Tom Lehman’s Dunes course doesn’t have a tree on it. The sprawling layout features menacing bunkers amidst fairways as wide as an eight-lane interstate. The green complexes are expansive, to say the least. Graham Marsh’s Pines course ducks into patches of trees but inevitably coming out to the dunes. It’s common to fly into Rapid City, S.D., and drive to The Prairie Club, where they hope you “golf, golf, eat, sleep. Repeat.” Finding the course can be tricky, as the sign on the road is easy to miss, and then it’s another two miles on a dirt road to the resort. Once on the property, your golf cart transports you from your simple but elegant cabin to the lodge, as well as the courses and two large practice ranges.

THE DISMAL RIVER CLUB
New Mullen, Nebraska
Dismal River is about as remote as it gets — five hours from Omaha, about five from Denver. Off the two-lane highway south of Mullen, you follow a road barely wider than a sidewalk for 18 miles before you see the sign for Dismal River. Then it’s another two miles on dirt to the resort. It’s worth it. Another two-course resort, the White course by Jack Nicklaus is fairly traditional. Then, six years ago, Tom Doak laid out the Red Course that’s located a mile-long bumpy cart ride on the same dirt road you entered the property on. The Red Course winds through the dunes like an angry serpent before landing into a fairly tame hollow. Raw and menacing with flared-up bunkers topped by long natural grasses, Doak’s design is all about knowing your game. Take it easy and move up. Tee spots are marked by stakes — red, white or blue. It helps to play with a member as first-timers end up looking for the next tee. The remoteness makes this a true stay-and-play resort, and the large TV room and high-end restaurant in the lodge is perfect for hanging out and mingling. The cabins are elegantly rustic. Pheasant and elk hunting expeditions can be arranged when in season. 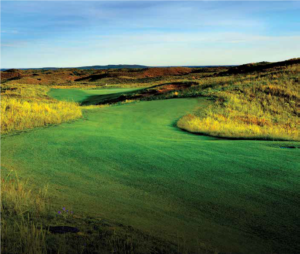 BALLYNEAL GOLF AND HUNT CLUB
Near Holyhoke, Colorado
Many golf aficionados consider this Tom Doak’s masterpiece. The drive off I-76, three hours northeast of Denver, takes you through corn and soybean fields as flat as yesterday’s pancake. And then you turn at a small sign onto a dirt road that takes you to this small private club set on a rolling landscape. It’s golf-centric, to be sure. The putting green at the center of the club allows for a short walk to an open expanse of flat ground. The scorecard says the yardage is 382-320. That means you don’t post a score because there are no hole ratings, therefore no courses rating, therefore no way to measure it against other courses in the USGA’s slope system. Play what feels comfortable. The caddie points and you put the tee in the ground. You need a caddie to know the short cuts through the dunes and where to hit. Doak also designed the Mulligan course, a par-3 layout that’s perfect for later afternoon betting-and-beer contests. The rooms are modern and very comfortable. The small restaurant demands you meet others. Though private, some outside play is allowed, so call ahead.

WILD HORSE GC
Near Gothenburg, Nebraska
Dave Asland and Dan Proctor both worked at Sand Hills GC before they created Wild Horse in the middle of the state. Hardly any course offers as friendly, fun and challenging a round. Assistant Manager Robert Wehnes, who worked for more than 10 years at Riviera CC, put it this way: “At Wild Horse, they don’t ask you to replace your divots. There is no bottle of sand. The land is so rich the divots fill in quickly.” Very easy to walk, Wild Horse doesn’t have the deep, angry bunkering found on other Sandhills courses, but the day I played the USGA would have been proud to hold the U.S. Open on its greens – 12 on the Stimp and as smooth as glass. Onsite cabins are available.

The Sky’s the Limit: From Ball Flight ...